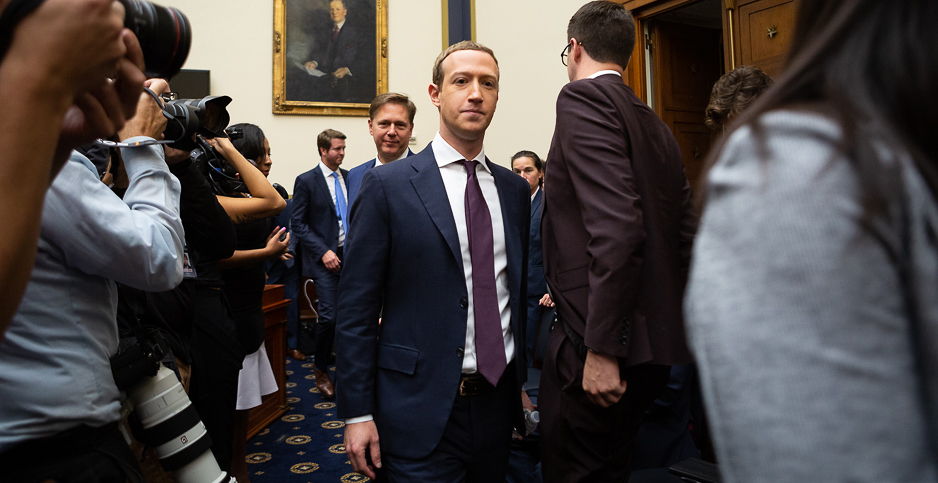 Mark Zuckerberg is slated to face a panel of House lawmakers this week, and activists want the Facebook Inc. CEO to face a barrage of questions on why the social media behemoth is allowing climate denial to thrive on its platform.

The company’s largely hands-off approach to climate denial, which has allowed climate misinformation to spread among Facebook users, has angered Democratic lawmakers in both the House and Senate, as well as environmental groups.

They said they hope Zuckerberg will face scrutiny over the issue at a hearing Wednesday.

Dozens of lawmakers in both houses of Congress have written letters to the company demanding an explanation as to why Facebook removed fact-checks on articles distorting climate science (Climatewire, June 23).

"With the consequences of inaction towards climate change becoming ever more catastrophic and dire, we believe you have a responsibility to your users to stop those seeking to blur the lines between facts based on climate science and those peddling pseudoscience," the lawmakers wrote. "We believe that the broader safeguards you have adopted have not sufficiently stemmed the tide of disinformation regarding climate change online."

The letter was organized by Rep. Donald McEachin (D-Va.). He said he hopes social media companies would take seriously the concerns of Congress.

"I want to give them an opportunity to respond without the congressional threat out there in the air," he said. "They’re well aware of what Congress has the ability to do. They read the election returns just as well as anybody else. They see the polling data, they know that there is a blue wave coming, they know that part of that blue wave is a green initiative, and that the 21st century is going to be known as the green century."

In the Senate, a group of lawmakers likely will monitor the hearing to see whether Zuckerberg explains why the company created a loophole for climate denialism by classifying it as an opinion.

Sen. Elizabeth Warren (D-Mass.) and three colleagues recently sent the company a detailed list of questions demanding that it explain its policies around climate science. The deadline for a response is Friday.

"I haven’t decided what the next step is, I’m waiting for the response from the company, but they are so terrified of Republicans that they bend over backward to accommodate them and ignore their own supposed fact-checking standards," said Sen. Brian Schatz (D-Hawaii), a signatory on the letter.

Facebook spokesman Andy Stone noted climate scientists can freely post their work to their pages and that new requirements that require registration to promote posts were put in place in response to Russian disinformation campaigns on the platform in 2016. He said no individual scientist has been targeted by the company. Stone also said that Facebook has had a policy in place for years that exempts opinion content from fact-checking.

Meanwhile, other Democrats plan to put pressure on the company around its posture on climate science. Those include Climate Power 2020, a group of Democrats and activists working to press politicians on climate.

John Podesta, an advisory board member of the group and a former senior adviser to Presidents Obama and Clinton, said Climate Power 2020 is working with lawmakers to close loopholes on climate denial.

Podesta said he hopes lawmakers use the opportunity this week to confront Zuckerberg over the company’s position on climate denial. He said Facebook’s unwillingness to crack down on misinformation may push the company to a point where stronger regulation is needed — something Trump also has threatened.

"I hope they force [Zuckerberg] to confront the fact that his public statements with respect to the climate threat are undermined by the policy that he has developed to spread climate disinformation," Podesta said. "In the end of the day, maybe this is where the curve bends, which is that Trump threatens it, but it’s time to consider whether their liability under the Communications Act is well placed at this point."