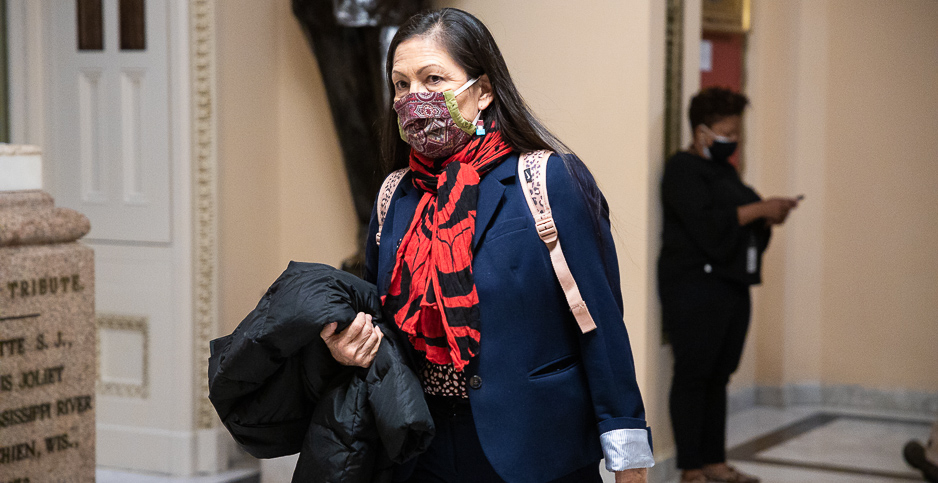 In the three months since being tapped to lead the Interior Department, Rep. Deb Haaland has remained largely silent in the face of mounting concern in conservative circles over her progressive environmental record and worries that she will support a public lands agenda that demonizes the fossil fuel industry.

Today, she will get a chance to respond.

At her confirmation hearing this morning, the New Mexico Democrat will face some of her harshest critics on the Senate Energy and Natural Resources Committee. She will also engage with staunch defenders and provide answers to questions that could either assuage skeptics or inflame opponents.

Democratic and Republican members of the committee will have to walk a political tightrope, too, as they interrogate a nominee whose confirmation is being hard fought by progressives intent on seeing the first Native American confirmed to a Cabinet posting.

Here are five things to watch as proceedings get underway.

How hard will Republicans hammer Haaland?

The former vice chair of the House Natural Resources Committee, Haaland has borne the brunt of Republican opposition to the Biden administration’s energy agenda, two centerpieces of which so far have been halting construction of the Keystone XL pipeline and freezing new leases for oil and gas drilling on federal lands and waters.

She faces particular ire from Republicans who hail from states that depend on the oil and gas industry — and, as it so happens, each of the 10 Republicans on the Senate Energy and Natural Resources Committee fits into this category.

This is expected to make for an especially hostile series of confrontations, as these lawmakers have deep anxieties about how President Biden’s energy policies will affect jobs, economies and revenue streams for the voters they represent.

Committee Republicans are being led by ranking member John Barrasso of Wyoming, who has said he doesn’t expect he’ll be able to support Haaland for her alignment with Biden on drilling practices. Sen. Steve Daines of Montana, the first Republican to announce he would deploy every procedural tool at his disposal to slow-walk Haaland’s confirmation, is also a member of the committee (E&E News PM, Feb. 8).

These senators and others will have to thread a needle in the force of their questioning, however. Haaland’s confirmation has become the cause of the moment for progressives, environmentalists and tribes that worry a historic nomination could be derailed by what they consider racism and sexism (E&E Daily, Feb. 22).

"I do think this is a fight for Big Oil," Kyle Herrig, founder and president of left-leaning government watchdog group Accountable.US, said in a press call yesterday. "But I will also say there’s a curious pattern of who the Republicans are opposing: Neera Tanden [at the Office of Management and Budget], Secretary [Alejandro] Mayorkas [of Homeland Security] and Haaland. … [I]t does seem to be that white males are having a lot easier time getting through the Senate than diverse nominees."

Can, or will, Haaland separate herself from Biden?

Haaland has become a proxy for Republican wrath over Biden’s energy agenda, even though she was not at the Interior Department during the drafting and implementation of the new president’s executive orders.

It will be difficult, however, for Haaland to claim plausible deniability over Biden’s controversial policies, nor does it appear she plans to: Her prepared opening remarks make clear she is aligned with and supportive of his agenda (E&E News PM, Feb. 22).

Her record also indicates her own environmental platform is far more progressive than Biden’s, stoking conservative anxieties and accusations that Haaland is a "radical" who cannot be trusted to build bridges and listen to all sides despite assurances to the contrary.

Haaland is a co-sponsor of the Green New Deal, which Biden has insisted he does not support. She would also like to ban hydraulic fracturing, a position Biden has assured voters he does not share.

She was also a member of Biden’s climate advisory committee during the 2020 presidential campaign — something critics can point to as an early sign of her influence over the administration’s policies.

Her task today will be to make clear she will follow Biden’s lead, not her own, in executing directives out of the Interior Department. At the same time, she will need to assure skeptics that she will be her own person and speak her mind.

The speech she will deliver at the start of her confirmation hearing, where she will pledge to "work my heart out" for all people who rely on public lands and support economies transitioning away from fossil fuel production, could set that tone.

What will Manchin ask?

A moderate Democrat from the coal-producing state of West Virginia, Manchin is likely to question Haaland along the same lines as some of her staunchest Republican opponents who worry about what the transition will look like for communities that have long relied on energy production no longer deemed healthy for the environment.

He isn’t, however, expected to question her as sharply or dismissively as GOP colleagues. He has said in the past he wants to be "deferential" to Biden as he fills out his Cabinet and told reporters on Capitol Hill yesterday he was "very open to hearing from [Haaland] and hopefully she’ll have a good hearing."

Still, Manchin’s announcement last week that he would oppose Tanden’s nomination to lead the Office of Management and Budget has made some Democrats nervous he could undermine the chances for other Cabinet contenders, too. At this point, it’s not certain whether Haaland would get any Republican votes, making Manchin’s support in a 50-50 Senate critical for her confirmation prospects.

In her prepared opening remarks shared with the press yesterday, Haaland signaled an understanding that Manchin’s was a vote she had to win.

"I want to give special thanks to Chairman Manchin for calling this hearing today, and for sharing with me the issues and needs of the people he represents in West Virginia," she will say this morning. "If confirmed, I will listen to all of the people represented by members of this Committee and this Congress."

Democrats are by and large expected to provide Haaland with a sympathetic audience at today’s confirmation hearing, but that doesn’t mean she won’t get some challenging questions from members of her own party.

Sen. Martin Heinrich, a fellow New Mexico Democrat who was at one point under consideration to be Biden’s Interior nominee, is introducing Haaland at today’s hearing in a sign of his unwavering support. He could, however, ask about her plans for supporting communities that are transitioning away from oil, gas and coal production.

Heinrich has gone on record criticizing Democrats for not being proactive enough in proposing solutions to facilitate inevitable transitions, saying it’s not enough to just say the creation of "green jobs" will fill the void (E&E Daily, Feb. 8).

Sen. John Hickenlooper (D-Colo.) has been aggressive in seeking to secure a commitment from Interior’s new, acting management about keeping the Bureau of Land Management headquarters in Grand Junction, Colo. — a move that was controversial during the Trump administration and which the Biden administration might seek to reverse. He will likely ask Haaland for her position on the matter (E&E Daily, Feb. 10).

Progressives on the committee also could seek to get Haaland to go further to the left on environmental policy than she might like given the scrutiny she’s under for supporting the Green New Deal. Sen. Bernie Sanders (I-Vt.) could ask those uncomfortable questions.

Will Don Young be persuasive?

Late last year, with Haaland’s nomination not yet official, Julian Brave NoiseCat — a Native American journalist and progressive activist — revealed that Rep. Don Young (R-Alaska) was a supporter of Haaland, the chairwoman to his ranking member spot on the House Natural Resources Subcommittee on National Parks, Forests and Public Lands.

"She has been a consensus builder and has been open to working across the aisle to get things done," Young said in a statement at the time. "There are a number of issues and projects in Alaska that are likely to be reviewed by the new Administration, and it would be helpful to have someone willing to sit down at the table and consider the thoughts of all Alaskans."

Young will join Heinrich today in introducing Haaland at her confirmation hearing, and support from a Republican whose state has been affected by Biden’s drilling moratorium could send an important message to GOP colleagues.

His words could be especially potent to Sen. Lisa Murkowski, the Alaska Republican who previously chaired the Energy and Natural Resources Committee and remains a senior member of the panel. She has not yet said how she will vote on Haaland.