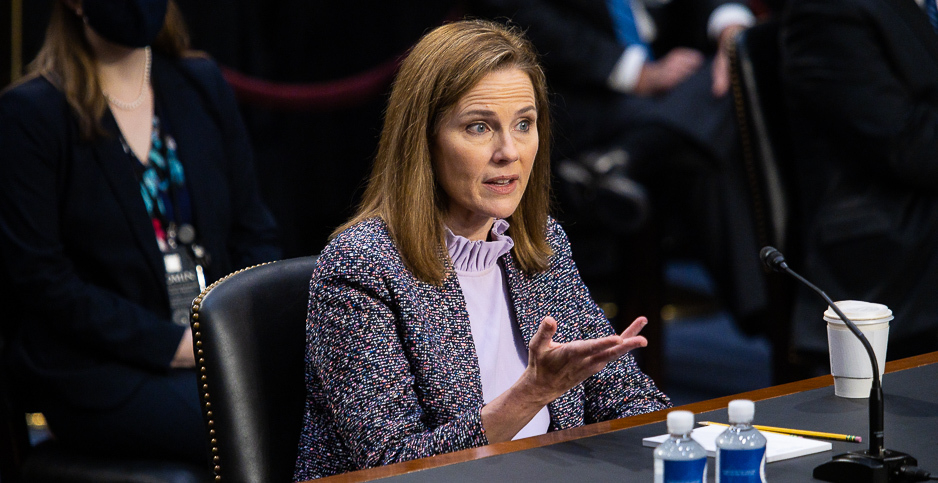 Supreme Court nominee Amy Coney Barrett raised a remarkable question among legal experts when she declined to affirm the presence of rising temperatures and their human-driven causes.

The facts of climate change are well-established, and some experts note that judges have a responsibility to acknowledge them unequivocally in order to rule on questions related to the powers of federal agencies.

"Casting doubt on the validity and importance of [climate change] itself, as Barrett does, raises serious concerns," Jason Rylander, a lawyer with the Defenders of Wildlife, said in an email. "If you cannot admit climate change is real and that humans are the cause, how can you fairly assess the validity of laws and regulations enacted to address it?"

Other judges haven’t had a problem affirming the science of climate change, including Justice Brett Kavanaugh, who was appointed to the high court by President Trump in 2018.

"The Earth is warming, and humans are contributing, and I understand the international collective action problem here; I understand that very well," Kavanaugh said in 2016 when serving on federal appellate court.

His comments came during arguments over the Obama-era Clean Power Plan.

He continued later: "There’s a huge policy imperative here; there’s a moral imperative." He even mentioned that Pope Francis was pressing for climate action.

That contrasts sharply with Barrett’s refusals during her Senate confirmation hearing this week to give a clear answer on whether climate change is happening.

Some experts, like Jeff Holmstead, a partner with Bracewell LLP, suggest that Barrett’s personal views on climate science won’t affect how she actually applies the law, especially since climate cases mostly focus on how to address the problem — not whether it’s a problem at all.

"I think what [advocates] would say is, ‘We need justices who understand just how serious this is, because if they understand that this is a crisis, they will be more likely to let EPA take aggressive action,’" Holmstead said.

"But I just don’t think that’s the way even democratically appointed justices … view their role."

But there shouldn’t be any dispute within the judiciary on the question of human-caused warming after the Supreme Court’s ruling in the landmark climate case Massachusetts v. EPA, said Vicki Arroyo, executive director of the Georgetown Climate Center. The ruling led to EPA’s endangerment finding for greenhouse gases and granted the agency its authority to regulate them.

She and others raised concerns about how the global warming questions were asked by lawmakers, as though one can "believe" in climate change as opposed to accepting it as undisputed.

"It’s a scientific fact, the same way that gravity or the coronavirus virus being contagious, or smoking causing cancer is," Arroyo said, "and so the fact that you even have to ask that and get a non-answer for three days is alarming to me."

Judges often attempt to understand science as part of their decisionmaking.

Hana Vizcarra, a staff attorney with Harvard Law School, noted that judicial questions regarding climate change are no different.

"At a time when many judges are recognizing the need to educate themselves on the basic facts and science around the current state of climate change, it is interesting that [Barrett] feels the topic is not relevant to the job," she said in an email.

In 2018, Judge William Alsup of the U.S. District Court for the Northern District of California ordered lawyers involved in a climate liability case to present lengthy presentations on climate science. Alsup called it a tutorial.

He ended up scrapping the case, but said in his ruling that the "order accepts the science behind global warming" (Climatewire, June 26, 2018).

Even specialized training for judges is known to happen.

Not everyone was receptive to the idea. Senior Judge Raymond Randolph of the U.S. Court of Appeals for the District of Columbia Circuit lambasted Sullivan for flagging the session, telling him that "the jurisdiction assigned to you does not include saving the planet."

"Climate change is impacting our lives, businesses and communities and, as it does, the law," said Vizcarra of Harvard. "It will increasingly become part of the fact patterns [Barrett] will be charged with evaluating should she be confirmed."