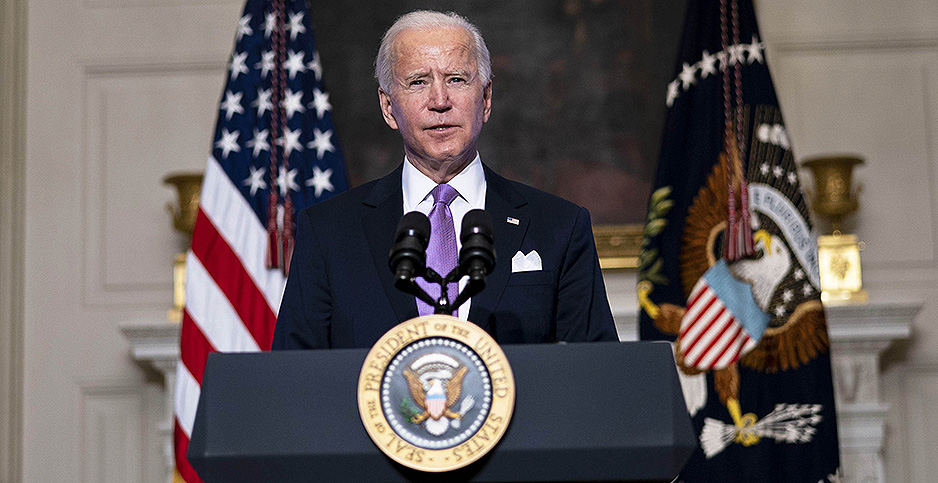 President Biden plans to sign executive orders today on a range of climate, environment and energy issues. Biden is pictured delivering remarks yesterday on COVID-19 in the State Dining Room at the White House. POOL/CNP/InStar/Cover Images/Newscom

President Biden raced toward fulfilling his gargantuan climate promises today with a sweeping effort to create clean energy jobs and begin phasing out fossil fuels one week into his presidency.

The executive orders signed by Biden this morning focus on helping front-line communities affected by pollution, address job losses in coal mining regions and bring climate science back to federal agencies after facing isolation during the Trump administration.

The moves mark Biden’s first steps toward putting the nation on a path toward carbon neutrality by midcentury through a $2 trillion plan that envisions a massive overhaul of the country’s electricity and transportation sectors.

"He’s not waiting to take action … because science is telling us we don’t have a moment to lose to fight," said Gina McCarthy, the national climate adviser. "Just one week into his administration, President Biden is continuing to move us forward at the breadth and the pace that climate science demands."

Today’s effort is historic in size and speed, eclipsing the early climate policies advanced by the Obama White House more than a decade ago. It’s also a whiplash moment in national politics, coming on the heels of the Trump administration’s yearslong campaign to deconstruct federal rules designed to limit carbon emissions.

Biden’s orders will impose a moratorium on new leasing for fossil fuel production on federal lands, establish climate change as a national security threat and stand up a White House task force to direct greenhouse gas reduction policies. It will also create an initiative called Justice40 to track and ensure that 40% of federal climate investments go to disadvantaged communities.

"The stakes on climate change couldn’t be higher; it’s existential," said John Kerry, the president’s climate envoy. "2021 is going to be the year that makes up for the loss of the last four years."

The U.S. will have its first Civilian Climate Corps focused on improving resiliency in communities across the country. And the actions today seek to conserve 30% of all federal land and water by 2030.

It will also ratify the Kigali Amendment to phase down hydrofluorocarbons, a potent greenhouse gas, and establish a scientific integrity policy to ensure government regulations are based on the best available science. It also reestablishes the President’s Council of Advisors on Science and Technology.

"Today’s executive order starts by saying it is the policy of this administration that climate considerations shall be an essential element of U.S. foreign policy and national security," McCarthy said.

The moves unveiled today, dubbed by the administration as "Climate Day," were met with enthusiasm by advocates, some of whom had criticized Biden’s policies as too moderate during the presidential primary race.

"The signal from President Biden today is unmistakable: For the next four years, every day will be climate day," Natural Resources Defense Council President Mitch Bernard said in a statement. "That will not only help us avoid a fate of ever-worsening extreme weather disasters, it will help us rebuild stronger in the face of the multiple crises gripping our nation, from the pandemic to racial injustice and the economy."

Biden’s actions will direct federal agencies to make clean energy investments in low-income neighborhoods and communities of color located near industrial pollution sites. It will create an environmental justice council based in the White House and establish offices devoted to protecting front-line communities at the Department of Justice and the Health and Human Services Department.

Despite the historical precedent of today’s actions, they are not without risk. Executive actions are susceptible to reversal by future presidents.

They also mark the opening salvo of Biden’s ambitious climate plan and alone are unlikely to result in large emissions reductions, according to experts.

Nevertheless, the actions will result in striking symbols of climate action, including a pause on oil and gas leasing. That could lead to policies by the Interior Department that disadvantage energy companies in the future, said Jesse Prentice-Dunn, policy director of the Center for Western Priorities.

"Hitting pause on oil and gas leasing is a crucial first step toward reforming a rigged and broken system that for too long has put oil and gas lobbyists ahead of the American people," she said in a statement.

The energy industry sought to portray the moves as a gift to foreign countries at the expense of U.S. jobs, and one that would weaken the fragile economy. American Petroleum Institute President Mike Sommers said the pause on oil and gas leasing on federal lands and waters was a troubling step toward a permanent ban.

"This is a step backward for environmental progress and is nothing more than an import-oil policy that will weaken U.S. energy leadership, hamper the economic recovery and undermine national security," he told reporters today. "Energy demand will continue to rise, especially as the economy recovers, and we can choose to produce that energy here in the United States or rely on foreign countries with lower environmental standards that are hostile to American interests."

In another dramatic shift from the last four years, the order will establish climate change as a national security threat. That’s a return to the way it was viewed during the Obama administration.

Climate change is a national security issue that touches on extreme weather, the opening of the Arctic to shipping and instability of nations experiencing severe climate effects, said John Conger, director of the Center for Climate & Security and a former senior Department of Defense official in the Obama administration.

He said that it’s important the Biden administration approaches climate and national security by connecting it to DOD, the Department of Homeland Security and the intelligence agencies.

The speed with which Biden is making moves on climate policy is unprecedented, even compared to the Obama administration, said John Morton, climate and energy director for the White House National Security Council in Obama’s second term.

Biden’s push to shift the U.S. toward clean energy and away from fossil fuels is happening in a different environment, where about 75% of the energy capacity added to the grid last year came from renewables, compared to about 10% when Obama took office.

"This train is moving faster than most people recognize, and the policy signals being sent are quite clear," said Morton, who is now a partner at climate investment firm Pollination. "The question is how quickly will markets respond, and I think the first signals are very convincing in that regard."