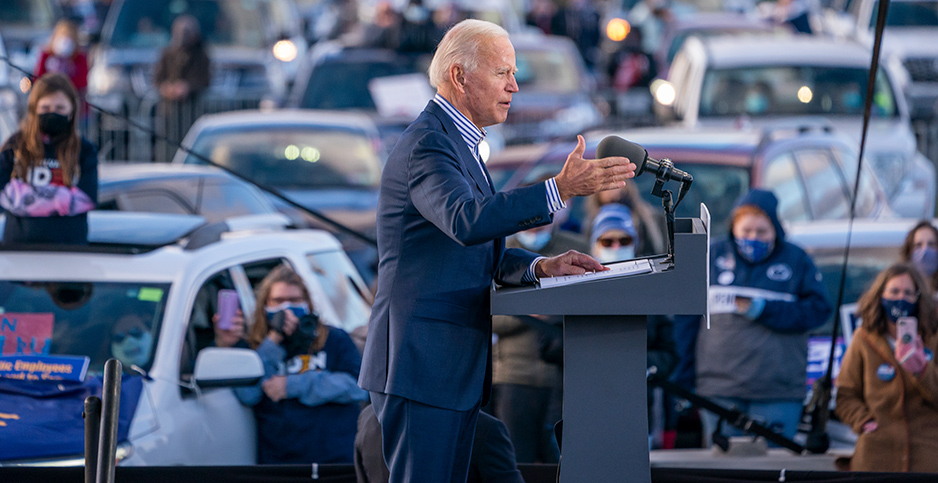 If Joe Biden wins the White House next week, he could take action to phase out gasoline-powered cars across the country, observers say.

But it remains to be seen how the former vice president would pursue the aggressive climate goal — and how much opposition he would face from affected industries.

But the plan stops short of setting a date by which all new vehicles sold in the United States must reach zero emissions.

The lack of detail makes sense for a Democratic nominee in a general election, observers said. But if Biden beats President Trump on Tuesday, he could beef up his climate credentials by setting a ticking clock for sales of fossil fuel-powered cars and trucks.

"The Biden administration should have a goal of when new sales of both cars and trucks should go to zero emissions — either electric vehicles or fuel cells," said Margo Oge, the former director of EPA’s transportation office under Presidents Clinton, Bush and Obama.

The target could make a significant dent in emissions from the transportation sector, which is now the country’s largest source of greenhouse gases, Oge said. Cars and trucks account for the bulk of the sector’s climate pollution.

Alexander Laska, a policy adviser for transportation at Third Way, a center-left think tank, said 2035 is the ideal date by which all new car sales should be zero-emission vehicles.

"We know that it takes about 15 years for the entire U.S. auto fleet to turn over," Laska said. "So if we’re going to meet our goal of decarbonizing transportation by 2050 so that we can avoid the worst impacts of climate change, we can’t wait 10 or 15 years to get serious about this."

2035 already has been floated as an interim climate target in two key respects.

Under the Clean Air Act, EPA has the authority to set greenhouse gas emissions standards for passenger cars and light trucks.

The Trump administration has challenged that authority in its Safer Affordable Fuel-Efficient (SAFE) Vehicles Rule, which rolled back the clean car standards established by Obama.

But a Biden administration could direct EPA to craft a replacement rule whose requirements were so stringent that only zero-emission vehicles could comply within 15 years.

EPA has the authority under the Clean Air Act to set technology-forcing emission standards that can achieve a certain level of electric vehicle penetration, such as 60% to 70% by 2035, Oge said.

"You don’t need a new piece of legislation under the Clean Air Act to do that. EPA and California could do that," she added.

The other option would be to push a bill through Congress. Democrats are expected to keep control of the House, and they have a shot at reclaiming a majority in the Senate. But they likely would have to eliminate the Senate filibuster to pass aggressive climate legislation.

Sen. Jeff Merkley (D-Ore.) already has introduced the "Zero-Emission Vehicles Act of 2020," which would amend the Clean Air Act to create a national ZEV standard for the first time (E&E Daily, Oct. 21).

The standard would require that battery electric vehicles and fuel-cell vehicles account for 50% of new passenger cars sold in the country by 2025 and ultimately 100% by 2035.

"The pandemic is showing us the cost of denying science and ignoring the problem, and, like millions of Americans, Senator Merkley is determined not to allow that same approach to the climate crisis to undermine our health, economy, environment and future," McLennan said in an email to E&E News.

In a sign of support, the Senate Special Committee on the Climate Crisis recommended establishing a national ZEV standard in its August report. Merkley is a member of the all-Democratic panel.

On the other side of the Capitol, the House Select Committee on the Climate Crisis also endorsed a national ZEV standard in its majority staff report in June.

One potential obstacle looms large over these efforts: industry opposition.

"I certainly think that any administration that pursues stronger environmental and climate policies will run into opposition," said Laska of Third Way.

"Of course there will be associations and groups and companies that will be thinking about ways they can mobilize against a policy they don’t support," he added.

The auto industry — including trade associations, companies and dealers — has a long history of challenging vehicle emissions regulations in court.

The plaintiffs — including local dealerships, the Alliance of Automobile Manufacturers and General Motors Co. — eventually agreed to drop the lawsuit after the Obama administration established nationwide clean car standards in 2010.

A spokesman for the Alliance for Automotive Innovation, the main trade association representing U.S. automakers and the successor to the Alliance of Automobile Manufacturers, declined to comment on a hypothetical political outcome, such as Biden winning the election and pursuing a national ZEV standard.

The spokesman provided a statement from John Bozzella, president and CEO of the alliance, saying the trade group "is committed to a cleaner, more efficient future for personal transportation" and is "focused on ensuring zero-emission vehicles are successful in the marketplace."

The oil and gas industry also would be affected by a national ZEV standard, which would chip away at its profits at the gas pump.

A spokesman for AFPM said experts at the trade group were unable to comment for this story before the election.

Multiple environmental groups declined to comment, citing their status as 501(c)(3) organizations, which prohibits them from engaging in political activity.

One source at an environmental group, who was not authorized to speak on the record, said a national ZEV standard should be the centerpiece of a broader clean vehicles initiative that includes tax subsidies for electric vehicle purchases, grants for EV charging infrastructure and incentives for manufacturing EVs in the U.S.

Correction: A previous version of this story said the American Fuel and Petrochemical Manufacturers opposed the Paris Agreement. In fact, AFPM has not taken a formal position on the climate accord.