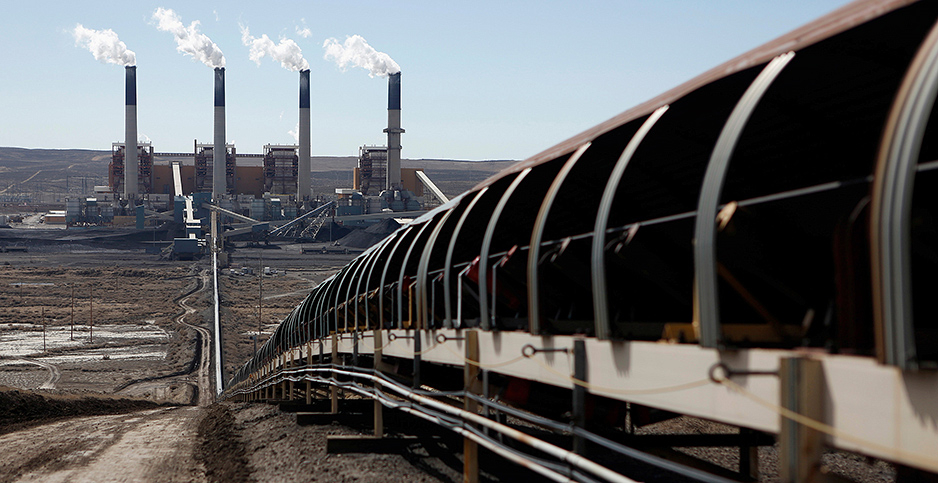 Coal being transported by conveyor belt to the Jim Bridger power plant in Wyoming. Its owner, PacifiCorp, accelerated the retirement of two units at the plant yesterday. Jim Urquhart/Reuters/Newscom

One of the West’s largest utilities said yesterday it plans to retire about two-thirds of its coal units by 2030 and replace the vast majority of that power with renewable energy.

PacifiCorp, which serves customers in six Western states, said it plans to build 3,000 megawatts of solar by 2025, 3,500 MW of wind and 600 MW of battery storage. The Portland, Ore.-based power company said it would retire 16 of its 24 coal units over the next decade. That includes two units at the Jim Bridger plant in western Wyoming, the largest coal facility in PacifiCorp’s fleet and among the biggest in the nation.

The move has significant climate implications. The units scheduled for retirement accounted for almost half of PacifiCorp’s carbon dioxide emissions between 2008 and 2018, according to an E&E News review of EPA emissions data.

The plan represents a dramatic turn for a utility that has long generated most of its electricity with coal and has the potential to reshape the Western electric grid. But it faced immediate questions from environmentalists and state officials in Wyoming, a coal-reliant state that is home to the majority of the utility’s coal plants.

Greens argued the shift is too slow to meet the emission reductions scientists say are needed to avert the worst impacts of climate change. Wyoming Gov. Mark Gordon (R) called the company’s plan to accelerate the retirement of four coal units in the state "a blow to the people of Wyoming."

"The primary drivers behind this transition really stem from opportunities to explore new resource technologies that frankly are simply more cost effective and being able to meet our customers’ needs with a reasonable cost and reliably," Rick Link, a PacifiCorp executive, told reporters in a call announcing the plan.

"The role of both production tax credits and ITCs, or investment tax credits, as they apply to wind and solar are driving the cost of renewable resources down making them competitive with other existing resource alternatives."

The announcement starts a lengthy process. The integrated resource plan (IRP) unveiled by the company represents the outline of PacifiCorp’s plans for the coming years. It must be approved by regulators in each of the six states in which the utility operates.

But there’s no doubt that PacifiCorp’s plans would amount to a renewable boom.

In Wyoming, the company’s plan to add 354 MW of solar power would double the state’s solar capacity. The same would hold true in Oregon, where PacifiCorp’s proposal calls for 600 MW of additional solar. The vast majority of the company’s solar build-out would occur in Utah over the next six years.

That is on top of a massive addition of wind power in Wyoming, where the company is already building 1,500 MW of wind and has plans to add another 1,920 MW.

As part of the company’s plans to bring more renewable energy online, PacifiCorp is proposing to build a $1.8 billion power line to run 400 miles from the windy plains of southeastern Wyoming into Utah, its largest market.

PacifiCorp has found itself at the center of a growing divide between Pacific states and Wyoming in recent years. Where Oregon and Washington have passed legislation aimed at ending coal use, Wyoming is attempting to keep its coal industry standing.

The Cowboy State enacted a law this year that requires PacifiCorp to market any coal plant it plans to close early to prospective buyers before it pulls the plug on a facility.

That law will now be put to the test in the case of Jim Bridger, a major source of CO2 in the energy sector. PacifiCorp plans to accelerate the retirement of one Jim Bridger unit from 2037 to 2023 and another from 2037 to 2028. The two units accounted for almost 10% of PacifiCorp’s emissions between 2008 and 2018.

The plant’s remaining two units would be closed in 2037. PacifiCorp is a two-thirds owner in Jim Bridger. Idaho Power Co., which announced plans to go carbon free earlier this year, owns the remaining third.

In total, PacifiCorp said it would move up the retirement dates of seven units. Company executives said they intentionally staggered the coal retirements to ensure the reliability of their system and to lessen the impact on the communities in which the plants are located.

The staging is important at a time when other utilities in the region are moving to close their coal plants, potentially leaving a shortage of capacity in the region, PacifiCorp officials said.

That did little to assuage environmentalists and coal supporters alike, for separate reasons. The Sierra Club criticized the company’s plans to run a third of its coal fleet well into the 2030s.

"It’s a good sign to see PacifiCorp finally making some serious plans to build new, low-cost clean energy infrastructure," said Christopher Thomas, a senior representative for the Beyond Coal campaign. "But the utility is slow-walking coal plant retirements despite spending the last year showing how much money it can save customers with a speedier transition."

Gordon, the Wyoming governor, took the opposite view.

He noted that the IRP process will give regulators a chance to review the utility’s assumptions. And he pointed out that the state will not only be hit by coal plant closures, but by the shutdown of mines that serve them. PacifiCorp’s Naughton plant, which is scheduled to stop burning coal in 2025, is served by a nearby mine. Jim Bridger and the associated Bridger mine straddle opposite sides of Interstate 80.

"My focus now is on the workers and the communities that will be affected by this announcement," Gordon said. "The state will continue to work cooperatively with local and federal partners on efforts to strengthen and diversify the economies of those impacted communities."

Wendy Gerlitz, policy director for the NW Energy Coalition, called the company’s coal retirements "significant." PacifiCorp faces a real challenge in balancing the retirement of coal plants for economic and environmental reasons with an increasing shortage of generation capacity in the West.

Yet she said the utility had areas for improvement, especially around energy efficiency and demand response, which would mitigate the need for new generation. The bigger question, she said, is what the shift means for climate change.

"I question whether that is fast enough momentum away from the coal resources from a climate perspective," Gerlitz said. "It may be insufficient to what we need given the climate crisis."