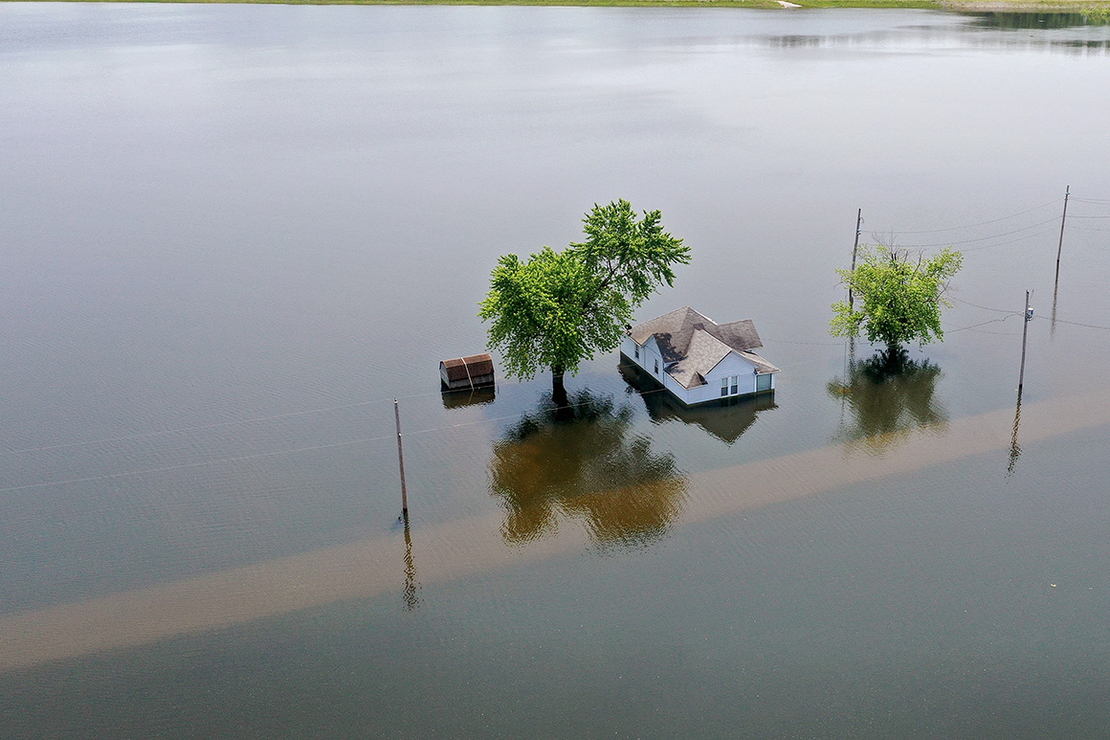 Floodwater rises around a Missouri home in 2019. Climate scientists are increasingly focusing their research on extreme weather. Scott Olson/Getty Images

When 25,000 scientists from around the world convene to talk research, a huge range of topics is sure to abound. But at this year’s annual conference of the American Geophysical Union — the world’s largest Earth and planetary science society — several urgent themes emerged.

Climate change is rapidly and dramatically reshaping the Earth. These changes have profound effects on human health and society. And science can help develop solutions to address the most pressing challenges of the times.

Today, “science is a bit less for curiosity and a bit more for posing solutions — looking at the impacts of the Earth system on people and on the environment, on the economy, etc.,” said Guy Brasseur, a scientist at the Max Planck Institute for Meteorology and the National Center for Atmospheric Research and AGU’s fall program committee chair.

Climate change long has been a major topic at AGU’s annual convention, no surprise at an event attended by thousands of Earth scientists. But the emphasis on the effects of warming — and particularly on their implications for human well-being — is more pronounced than ever.

Brasseur himself hosted a plenary session on the societal transformations needed to address climate change. And the convention’s final plenary session focused on the outcomes of the latest U.N. climate conference, which took place this year in Glasgow, Scotland.

Meanwhile, dozens of scientific sessions and hundreds of research presentations focused on climate impacts. Topics included everything from melting glaciers and rapid Arctic warming to tropical cyclones, wildfires, floods, droughts, the global methane cycle and the use of satellites to track greenhouse gas emissions.

These are sessions proposed and designed by scientists themselves — a direct reflection of the scientific community’s interests and priorities.

Press announcements, timed to coincide with the convention, also focused on climate change.

And panels of scientists convened to discuss the links between climate change and extreme heat, wildfires, storms and tropical cyclones.

Worsening extreme weather events around the world — which kill thousands, displace millions and drive billions of dollars in damage — are a major contributor to the growing urgency of scientific research on climate impacts and climate solutions.

This year’s conference concluded a year filled with landmark climate events. Record-breaking heat waves, wildfires, floods and other disasters swept the globe in 2021.

An unprecedented heat wave in the Pacific Northwest sent temperatures soaring to eye-popping levels: 110 degrees Fahrenheit in Seattle, 116 degrees in Portland and an unfathomable 121 degrees in the tiny British Columbia village of Lytton. Scientists later concluded the event would have been virtually impossible without the influence of climate change (Climatewire, July 8).

Record-breaking rainfall spurred catastrophic floods across Germany and Belgium, in China’s Henan province and in India’s Maharashtra state over the summer.

Later, the remnants of Ida broke all-time rainfall records as they hurtled through the Northeast, triggering devastating floods in New York, New Jersey and surrounding areas.

Wildfires raged across the Northern Hemisphere this summer. Western North America, Siberia, the Mediterranean, and parts of India and Pakistan were among the hardest hit, with some places seeing record-breaking carbon emissions pouring from the infernos.

Disaster struck the Pacific Northwest yet again in November, when torrential rainfall caused devastating floods and landslides throughout the region. Canadian officials called it a “once-in-500 year” event.

And that’s just a sampling of the extreme events that rocked the globe this year. They’ve put 2021 on par with 2020, 2019 and other recent years all marked by a spate of record-breaking climate-related disasters.

As extreme events worsen worldwide with every passing year, the links between climate change and disasters are an increasingly urgent field of scientific interest. So, too, are their impacts on human health and society.

A growing research priority around extreme events is “who’s being affected, why are they more vulnerable and how can that be addressed,” said Cassandra Rogers, a scientist at Washington State University, Vancouver, who spoke about extreme heat events at this year’s conference. “I think all that — the human element — is pretty important because we have to make sure people are well prepared for these events, understanding what they’re going to experience.”

“I used to be a cook and a sous chef before I came to go to back to school at Columbia,” said Diaz, who spoke about extreme heat and human health at the conference. “So I worked in the restaurant industry, I worked in a number of places where we had relationships with local farmers.”

It was a reminder, Diaz said, that “there’s people at every point in the supply chain.”

A desire to hold human impacts at the center of science is increasingly evident in the research community, said Brasseur, who has watched AGU’s top research subjects gradually shift over the years.

“What I see as an evolution is that people are more and more interested in responding to the environmental crisis that the world is facing,” Brassuer said. “And so AGU is pushing very much what we call ‘solutions science.’ And so you see more and more papers that are going into that direction — what should we do about not just the climate crisis, but other crises? What should we do about the lack of water in the western United States?

“These kinds of questions are, I think, increasingly important,” he said.