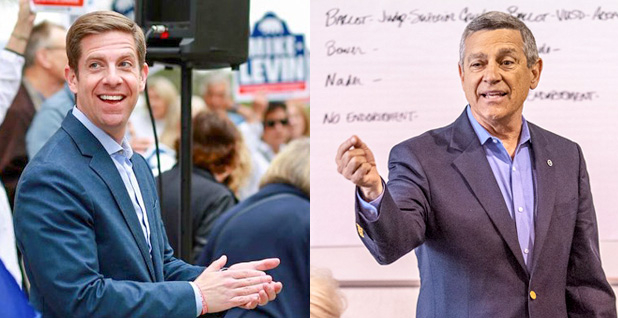 Accusations about phony environmentalism and ties to oil interests are roiling the race to replace Rep. Darrell Issa (R-Calif.), less than two weeks out from the state’s primary.

It’s considered one of the most competitive races in the state. On Tuesday, The Cook Political Report moved the race from "lean Democrat" to "toss-up" because of all the uncertainty surrounding the election.

Kerr says Levin’s not as green as he professes.

"Mike Levin Calls Himself an Environmental Attorney but There’s Something He’s Trying to Hide," said the mailer, which features an image of oil dripping behind a picture of Levin. "He’s a Former Exxon-Mobil-Funded V.P. of Government Affairs."

The TV spot was equally harsh.

"Levin’s company pushed fake green technologies, which could lead to increased use of oil and coal and drilling off our coast," it said.

The mailer says Levin ran the lobbying department at FuelCell Energy, a Danbury, Conn.-based company that makes and sells stationary fuel cell power plants. Those use fuels such as natural gas and biogas to make electricity.

The company in 2016 received an undisclosed cash infusion from Exxon Mobil Corp., according to The New York Times. Exxon and FuelCell partnered that year on a project to test carbon capture at an Alabama power plant.

Levin pushed back against the assertions. Kerr’s mailer and TV ad make numerous false statements, Levin said in an interview.

When he worked at FuelCell Energy from 2014 through mid-2017, Levin said, he was director of government affairs for the Western region, not a vice president overseeing lobbying.

He advanced green projects in California, such as a fuel cell operation at the University of California, San Diego, that uses biogas from a wastewater facility to make electricity. He was not involved in the Exxon Mobil project in Alabama, he said.

He’s spent much of his career working on green efforts and pushing renewable power, he said. Levin co-founded an Orange County nonprofit, Sustain OC, to drive job creation and economic growth in the clean technology sector. He earlier worked on environmental deals as attorney at the Bryan Cave law firm in Orange County.

"I just find their entire playbook here to be extraordinarily misleading and deceptive," Levin said. "I think voters will see through it. It must mean we’re doing very well if they’re going after me on this."

Looking for an edge in a tight race?

Kerr campaign manager Andrew Grunwald in an email said the mailer was sent because "Mike Levin is calling himself an environmental attorney when it’s just not true. Voters deserve to know the truth about Mike Levin’s ties to big oil."

Grunwald did not respond to questions about whether it’s accurate to call Levin a lobbyist when he has not registered as one. He also did not address questions about the other parts Levin said were inaccurate or misleading.

The 49th District is one of seven GOP-held seats in California that the Democratic Congressional Campaign Committee has prioritized as among those it wants to flip this November. California holds open primaries, where the top two finishers advance to the November election regardless of political party.

California 2020, an independent expenditure group wanting a Democrat to win the seat, funded the survey. Following the results, it said it is backing Applegate because it believes he has the best chance to prevail.

Garry South, a California-based Democratic strategist, said it’s not unusual for Democratic candidates before a primary to attack each other with allegations about links to a "toxic special interest" such as oil.

The strategy can work to wound a competitor, South said. But in an open primary, it can also help the candidate who is attacked. Independent voters and moderates might see that person as more moderate.

It’s "largely kind of maneuvering at the edges," he said, because there’s typically not much difference between Democratic candidates on environmental policy positions.

The claims against Levin aren’t new, though Kerr is the first to fund a mailer and TV ad. Kerr had raised the most money of all candidates in the race in the latest reporting period, according to the Federal Election Commission (E&E Daily, May 15).

Applegate in an interview said it’s not clear how much Levin supports a switch to 100 percent renewable-generated electricity, given his work at FuelCell Energy. Hydrogen fuel cells require natural gas for any commercial viability, Applegate said.

"He has a lot more connections with fossil fuel than he does renewables," Applegate said.

California lobbying records list Levin as the "responsible officer" at the company. It hired an outside firm for lobbying, however.

"The idea that somehow my career is anything but trying to advance sustainability and reduction in greenhouse gas emissions is absurd," Levin said.

The Sierra Club and California League of Conservation Voters (CLCV) both endorsed Levin. CLCV defended him against the charges made in the Kerr mailer and ad.

"His environmental record is unimpeachable, and throwing dirt at him doesn’t change that," said Andy Kelley, communications director for CLCV.

He also advocated for S.B. 350, which raised the state’s renewable electricity mandate to 50 percent by 2030 and set a goal of doubling energy efficiency savings by that year, Kelley said. Levin brought lawmakers evidence showing how the state’s green policies helped economically, he added.

"This is a priority race for us," and CLCV endorsed Levin early, Kelley said. "This is not the best of several options. It’s really the person that we need."