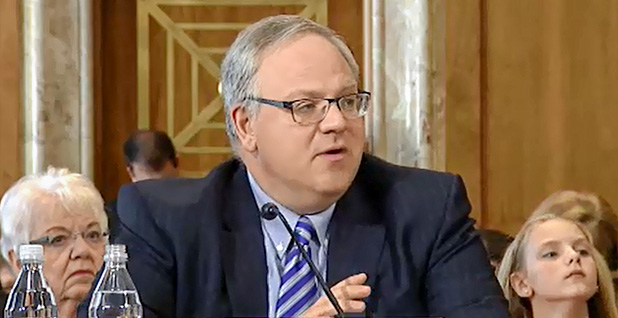 The Trump administration’s nominee for Interior deputy secretary today promised he would honor science in his decisionmaking if confirmed to lead the department’s daily operations.

"We will apply the law and be honest with the science," David Bernhardt said today during his confirmation hearing before the Senate Energy and Natural Resources Committee.

Sen. Debbie Stabenow (D-Mich.) asked former President George W. Bush’s Interior solicitor how lawmakers could trust that he would respect science in enforcing and applying laws like the Endangered Species Act, especially at a time when scientists are under attack.

"I am certain that the scientists at Interior are not under attack," Bernhardt told Stabenow, adding that he did not "modify scientific data" during his tenure at Interior.

"I believe we need to take the science as it comes, whatever that is," the native Coloradan said, which didn’t satisfy Franken.

Bernhardt added that he believed the contribution of science on climate change was "very significant" but that policy decisions would be made according to the administration’s agenda as much as allowed under the law.

Bernhardt, whose nomination has caused controversy because of his lobbying work on behalf of energy interests, promised to keep an "open mind" and listen to different perspectives if confirmed to manage the department’s 70,000-person workforce and vast portfolio.

Bernhardt served as the department’s top lawyer during the Bush administration, as well as counselor and deputy chief of staff to then-Interior Secretary Gale Norton and director of the department’s Office of Congressional and Legislative Affairs.

"I have had an opportunity to work on many complex issues affecting" Interior’s diverse bureaus, he told the committee. "I respect the often-conflicting legal and policy issues likely facing the decisionmakers within the department."

The hearing was largely devoid of fireworks, despite "grave" concerns raised by ranking member Maria Cantwell (D-Wash.) about "Bernhardt’s record of working on behalf of corporations at the expense of the environment and his history at the Department of the Interior during years plagued by ethical scandals."

Ethics disclosures Bernhardt made ahead of the confirmation hearing show that he was paid at least $80,000 last year by a host of energy and environmental interests (Greenwire, May 11).

Panel Democrats, including Cantwell, asked about various ethical issues and allegations of mismanagement at Interior during Bernhardt’s tenure — including a drug and sex scandal at the then-Minerals Management Service and political interference in endangered species decisions — as well as his resume as a lobbyist.

"I delivered advice to the secretary or the deputy secretary that was based upon my understanding of the parameters of the law as it existed, not what I wished the law said," he said in his opening remarks.

Chris Saeger, executive director of the Western Values Project, called Bernhardt "the embodiment of the kind of swamp creature President Trump pledged to run out of Washington." Saeger said the committee should force him to answer how he can make "impartial decisions as the deputy secretary that won’t directly benefit his former lobbying firm and/or the oil and gas industry."

Bernhardt promised if confirmed to "not participate personally or substantially in any particular matter involving" his former clients or "specific parties in which I know the firm is a party or represents a party" for one year, unless he receives authorization to do so.

"The minute I walk out of that firm, I have no interest in their interests," Bernhardt said of his job as chairman of the natural resources department at the law firm Brownstein Hyatt Farber Schreck LLP. "If I get a whiff of something that involves my firm," Bernhardt said, "I’ll walk straight to my ethics office" with it.

Turning to another topic, Sen. Angus King (I-Maine) asked Bernhardt specifically about the Antiquities Act, the law that gives the president broad authority to designate national monuments but not specifically to revoke them.

"I could show you legal opinions going both ways" on the law, Bernhardt said, referring to the president’s authority to revise or revoke monuments. But he added that "this isn’t a decision made by Interior" but by the White House. "I cannot predict at this moment in time where the White House counsel will end up" on interpreting the president’s powers under the Antiquities Act, he said.

The Outdoor Recreation Industry Roundtable, which includes several recreational vehicle and equipment manufacturers, earlier this week sent letters to Chairwoman Lisa Murkowski (R-Alaska) and Cantwell expressing support for Bernhardt and citing his prior public service at the department. "We have found him responsive, intelligent and committed to cooperation among government agencies at all levels and the recreation community’s private sector."

Interior spokeswoman Megan Bloomgren gave reporters at the hearing letters of support for the nominee from multiple outdoor, hunting and conservation groups, including Ducks Unlimited and the Boone and Crockett Club.

Several members of the Congressional Western Caucus heaped praise on the nominee. Caucus Chairman Rep. Paul Gosar (R-Ariz.) in a statement called Bernhardt "a man of impeccable character" and "one of the brightest minds I know." Rep. Mike Coffman (R-Colo.) said he felt "confident" that Bernhardt "understands issues facing the Western states and will also bring his expertise and professionalism" to the department.

Bernhardt’s testimony was replete with personal anecdotes of growing up in rural Rifle, Colo., riding horses, hiking — and accompanying his parents to water district and soil conservation meetings.

"As a kid, I did not always understand the issues discussed, but I thought the small business owners, farmers and ranchers who volunteered their time to participate in these meetings were doing very important work," Bernhardt said. "Where there were disagreements, they took place with civil discussion. At times, they viewed their federal neighbors as helpful, and at other times far less so."

He grew up in Garfield County, Colo., where the federal government owns roughly 60 percent of the lands, and experienced the boom and bust of the oil shale economy there.

"One of those impacts, at least for me, was a sense of dread that no one, except those struggling in Garfield County, cared about its fate," Bernhardt said. "That feeling was powerful. It led me to leave high school a year early to get away."