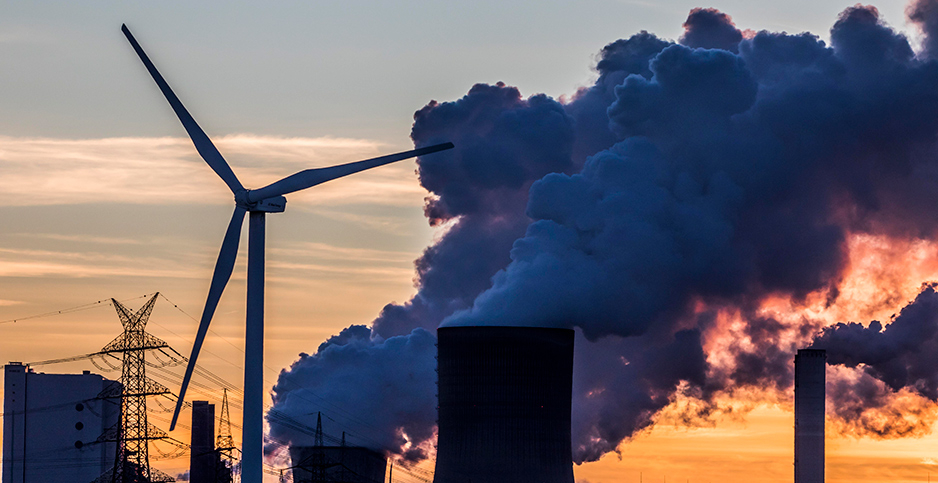 A wind turbine and a coal-fired power plant are pictured in Germany. European carbon prices have stabilized at record high levels. imageBroker/Jan Tepass/Newscom

European carbon prices languished in the single digits for years. But no longer.

The price for carbon allowances on the European Union’s Emissions Trading System (ETS) has surged 60% this year, recently crossing the €50-per-ton threshold for the first time. The rally marks a dramatic reversal from just a couple of years ago. ETS allowances sold for less than €10 a ton as recently 2018.

The turnaround owes to several factors. Power demand on the continent is up thanks to an unusually cold start to 2021, stoking demand for additional allowances. Policymakers have also moved in recent years to strengthen the ETS. In 2019, regulators implemented a series of reforms aimed at limiting an oversupply of credits, which had long held prices down.

But perhaps the biggest factor has been the expectation that Europe is willing to push more strenuously against climate change than ever before. The European Parliament committed to cutting emissions 55% of 1990 levels by 2030, a large increase over its previous pledge of 40%. European lawmakers are expected to propose additional reforms to the ETS this summer.

"Anticipation of future allowance shortages are prompting market participants to hoard allowances and increasing allowance demand," wrote Yan Qin, an analyst who tracks the ETS at Refinitiv, in an email.

She predicted prices will stabilize around €50. Power companies and others covered by the trading system are buying credits now in anticipation of higher prices later. Banks and other investors are now major players in the market, holding roughly a quarter of long positions in the ETS.

"Some of the institutional investors [view] EUA as an attractive asset to hedge against climate risks of its portfolio," Qin wrote, referring to European allowances.

Cap-and-trade programs like the ETS have for years been maligned for their weak prices, with critics arguing they are unable to deliver the level of promised emissions reductions.

The low prices are one reason President Biden has chosen to focus on a federal clean electricity standard rather than a cap-and-trade system, as his former boss President Obama did at the onset of his presidency in 2009.

"It is a simple lesson: People look at cap-and-trade systems and say the allowance prices are low and there is something wrong with the system. Usually the targets aren’t ambitious," said Robert Stavins, who leads the environmental economics program at the Harvard Kennedy School. In Europe’s case, "they have toughened the climate targets. They have made it more ambitious."

Much of the price increase in Europe’s ETS can be tied to a 2019 reform to remove excess credits from the system, said Michael Mehling, a professor at the Massachusetts Institute of Technology who studies European energy markets and climate policy. Prices increased steadily throughout 2018 and 2019, climbing into the €20-30 range.

That fundamentally altered European power markets, making gas cheaper than coal and accelerating the continent’s shift away from the carbon-intense fuel. Refinitiv estimates European power emissions will be 50 million tons lower this year than they would be absent a carbon price.

The ETS covers manufacturers in addition to power generation. Unlike utilities, which can find relatively cheap solutions to high emissions, like wind and solar energies, industry has fewer options. That could lead to increasing calls from companies to inject more credits into the system to reduce carbon prices, thus weakening the system, Mehling said.

"It’s a perfect glass-half-full, glass-half-empty situation," he said. "What Europe shows is you can tinker your way to making a market more robust. … But the glass-half-empty part is just how unpredictable these things are. No one three or four years ago would have said we would hit €50. You would have been laughed out of the room."

For now, many analysts think the ETS has room to grow. Today’s prices are insufficient to drive investment in areas like industry, where carbon abatement remains expensive. Those prices will have to climb if Europe is to continue to rely on cap and trade for fueling its long-term climate goals.

Some countries, like Germany, have proposed "contract for difference" subsidies, where the government pays the difference between actual carbon prices and those believed to be needed to drive development of green hydrogen or carbon capture.

How far prices climb may ultimately depend on how far Europe is willing to push.