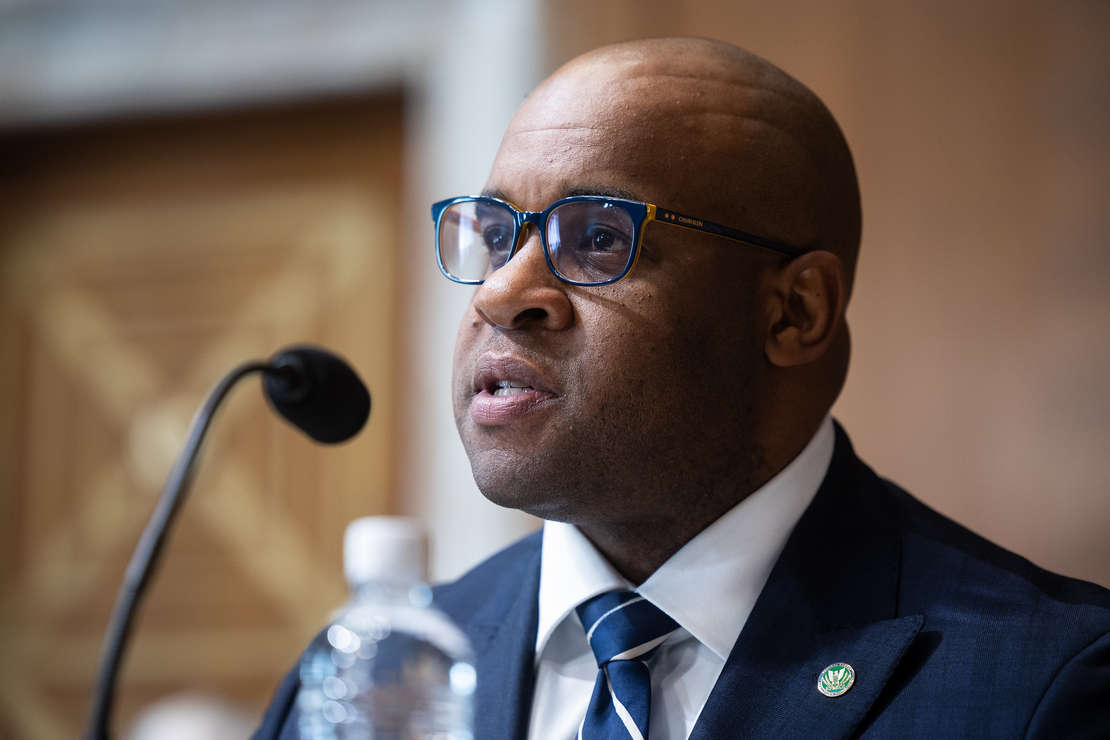 When Willie Phillips joined the Federal Energy Regulatory Commission last December, some FERC watchers saw the appointment as an opportunity for Chair Richard Glick to advance his agenda.

But Phillips sees himself as playing a different role at the commission: a consensus-builder.

Phillips’ nomination by President Joe Biden — and confirmation by the Senate — gave the five-person, bipartisan commission a Democratic majority for the first time in over four years. His arrival at FERC also opened the door to reforming the process for permitting natural gas projects and addressing other high-profile issues.

Still, in a recent interview with E&E News, Phillips said he isn’t shying away from opportunities to work with the two Republicans on the commission.

“FERC works best when it works together. Consensus building is something I’ve done everywhere I’ve been in my career,” said Phillips, whose previous positions include utility regulator for the District of Columbia and assistant general counsel at the North American Electric Reliability Corp. (NERC). “I’m trying to do it here at FERC.”

The changes sought to compel natural gas project developers to account for the interests of landowners and environmental justice communities and reduce their emissions, establishing a first-ever threshold for measuring whether new facilities’ climate-warming emissions were significant (Energywire, Feb. 18).

The proposals were opposed by the two Republicans on the commission, on the grounds that they could raise energy prices and obstruct needed infrastructure. The following month, the commission unanimously voted to turn the proposed policies into drafts for further review (Energywire, March 25).

Although Phillips voted for the two gas policies in February, including the new greenhouse gas emissions threshold, he said he’s now interested in hearing from industry and other groups about “where or if” FERC should draw a significance line on gas projects’ climate-warming emissions.

“I’m looking forward to sitting down and seeing what stakeholders are saying,” he said.

In a wide-ranging discussion, the Alabama native and proud Eagle Scout also addressed another major rule recently issued by FERC, which would change how electric transmission lines are planned and paid for (Energywire, April 22). Seen by some experts and climate advocates as a key proposal for advancing clean energy, the rule could complement efforts in many states to switch to cleaner power sources, Phillips said.

In addition, he shared his support for having Congress act to set mandatory reliability and cybersecurity standards for the natural gas pipeline system. Similar standards are already in place for the electric power system.

Rep. Bobby Rush (D-Ill.) has introduced legislation to establish the first mandatory standards for gas pipelines, but the effort has gotten pushback from Republican lawmakers and some industry groups.

“It’s a no-brainer to have [the] same type of regime for natural gas pipelines,” Phillips said.

Phillips sat down with E&E News to discuss natural gas, electric transmission planning and FERC’s upgrade from “sleepy” to “little-known.”

What should people make of the commission’s decision in March to gather more comments on the two gas policy proposals that are now drafts?

FERC turning the policy statements into drafts is a very good thing. Where we can get more feedback from industry, that’s a good thing.

Moving forward, having stakeholder buy-in and being flexible to tweak where necessary these policy statements, so that they can be long-lasting and more durable, I think that’s a very good thing.

The greenhouse gas significance threshold seemed to get some of the strongest pushback. Did that threshold make sense? Is a climate change policy for gas projects still on the table for FERC?

It’s important to note that the commission has and will continue to consider the effects of climate change in our pipeline project reviews. Also, the [emissions policy] was never presented as a final policy. I was interested in hearing feedback from people on exactly where or if we should draw a significance line. I’m still reviewing the comments on that, and I’m looking forward to sitting down and seeing what stakeholders are saying. I want feedback.

Can transmission planning reforms be finalized and implemented in time to meet states’ clean energy goals and get the U.S. close to Biden’s 2035 decarbonized electricity goal?

I call the transmission [notice of proposed rulemaking] a landmark NOPR. It’s a first big step for the commission. We haven’t addressed transmission policy in over a decade. So I think the commission is moving deliberately and with a sense of urgency. The process will take the course it has to take.

This is a battleship, and it doesn’t turn on the dime. When you deal with something as important as transmission, it’s important we make sure we do it right. So I believe we’re moving at the right pace. I absolutely take into consideration [states’ renewable energy] goals — I’m a former state regulator. There’s a lot of great activity happening in the states, and the NOPR we just put out complements those actions.

Do we need mandatory reliability standards for pipelines? What’s your message to Congress about that?

Yes. The electric industry was the first of the critical infrastructure sectors to stand up reliability standards. This was after the 2003 Northeast blackout. I think we’ve seen a lot of progress, in large part because of those mandatory standards, especially when you think about critical infrastructure protection standards. Those are a great foundation for the requirements that are needed for utilities to identify, protect and respond to cyberthreats.

It’s a no-brainer to have that same type of regime for natural gas pipelines. Of course, the [Transportation Security Administration] has jurisdiction, especially over cybersecurity, on pipelines. I believe they have taken some great steps and instituted their first mandatory standard recently in the wake of cyber events here at home. I think we’re moving in the right direction, but it makes a lot of sense to me that we have mandatory standards for pipelines.

Glick’s current FERC term is ending at the end of next month. What’s it been like to work under his leadership and do you hope he stays around?

I like Chairman Glick a ton. He’s done a really effective job at the commission. As for his term and what will happen next, I defer to the White House on that. But I do believe the commission works best when it’s at a full complement. We’ve been able to do a lot just since I’ve come on board in the past six months. That’s a testament to having five commissioners.

Last year, FERC hired Montina Cole to serve as the agency’s first senior counsel for environmental justice and equity. How have you seen that affect decisions and processes?

I’ve had several meetings with Ms. Cole. I’m very happy to see her come on board to the commission. I think it’s an important signal of the seriousness we take EJ issues and making sure we properly engage EJ communities. It’s a priority of mine.

I also applaud Chairman Glick for standing up the Office of Public Participation. I think the commission is still refining what that role will be and what exactly all the terms that are used in the industry will mean for us as we do our work. But the key takeaway is we’re addressing it head on, and I’m proud of that.

We’ve seen some significant power outages the last few years, including in Texas and California. Are grid operators, lawmakers and others responding adequately to prevent those kinds of events from happening again?

Being a former NERC attorney, I see so many of the issues in my industry through the prism of reliability. Extreme weather events is one of the things I’m looking out for. I’m proud that the commission had a technical conference on Winter Storm Uri a few weeks ago. We heard from witnesses and operators who talked about the need for resource adequacy and diversification in our resources. The increasing amount of severe weather events we’ve seen is a constant reminder that climate change is ever-present.

What do you think of the political attention that FERC has been getting lately?

When I started practicing in this space almost 20 years ago, that attention wasn’t there. I believe it’s a good thing. I think The Washington Post upgraded us from “sleepy” to “little-known” as an agency. It’s also a testament to the work we do that people are paying more attention to these issues. In the geopolitical space we’re in right now, the work FERC is doing is extremely important. So I welcome the renewed attention.

What’s something most people don’t know about you?

I’m an Eagle Scout. I was a scout leader even through my time in college and in law school as well. I believe a lot of what I learned then I still use today.

This interview has been condensed for length and clarity.