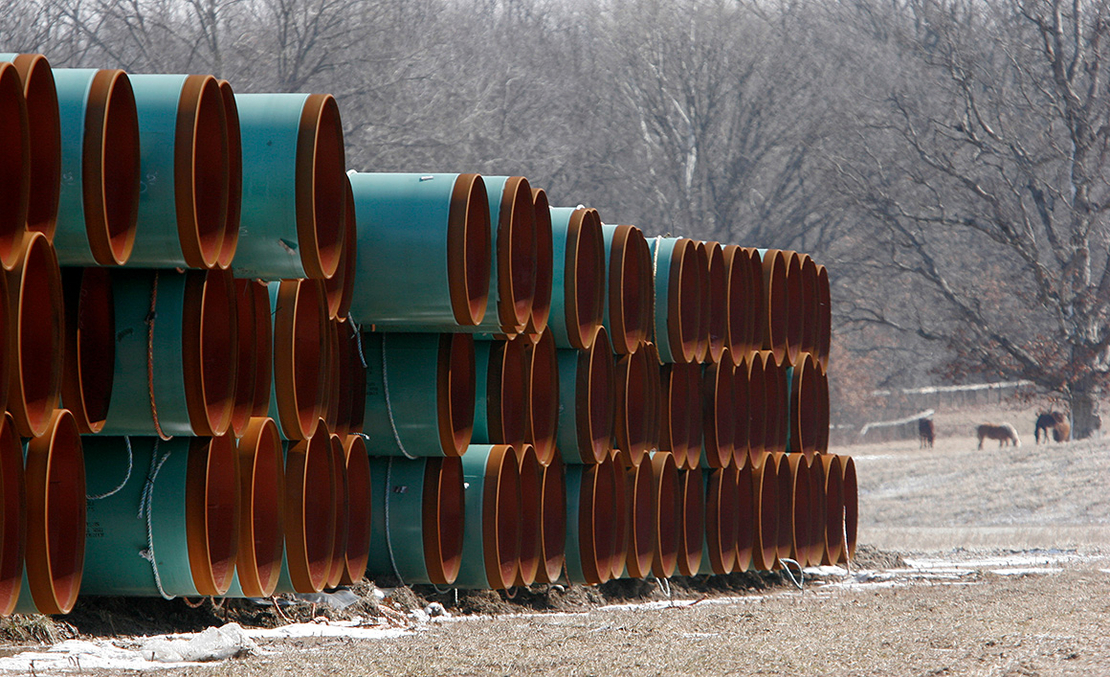 Gas pipeline sections are stacked in a field in Illinois. AP Photo/Seth Perlman

The commission’s three Democratic members approved both policies, while the two Republicans on the panel opposed them.

The natural gas orders came during FERC’s regular open meeting, during which the agency also opened a new proceeding on technologies to make electric power lines more efficient and announced a new senior staff member at the Office of Public Participation. Set up for the first time last year, the office is designed to help members of the public engage with the agency as well as provide technical support for those affected by commission decisions.

The revised policies represent a notable departure for FERC, which critics say has a pattern of “rubber-stamping” gas pipelines and liquefied natural gas terminals without enough consideration for environmental harms or effects on communities.

“Today is a historic day,” said Gillian Giannetti, an attorney at the Natural Resources Defense Council’s Sustainable FERC Project. “With today’s decision, FERC is working to bring balance to its gas reviews that has severely been lacking.”

But while environmental advocates and some Democratic lawmakers welcomed the decisions, natural gas groups and their allies said the changes could raise energy costs and make it harder to meet demand for gas. FERC’s Republican commissioners also said the policies go beyond FERC’s role as an independent energy regulator, and Sen. Joe Manchin (D-W.Va.), the chair of the powerful Senate Energy and Natural Resources Committee, called FERC’s moves “reckless.”

“The Commission went too far by prioritizing a political agenda over their main mission — ensuring our nation’s energy reliability and security,” Manchin said in a statement. “The only thing they accomplished today was constructing additional road blocks that further delay building out the energy infrastructure our country desperately needs.”

For years, FERC has generally looked for evidence of economic demand when considering whether or not to approve a new gas project, as outlined in its “certificate policy statement” on natural gas pipelines. So long as a developer could show that one or more shippers had committed to buying the gas, the independent agency would sign off on nearly all gas pipeline applications it received, under FERC policy and historic precedent.

Until recently, FERC also generally did not consider how gas proposals would contribute to climate change. While the agency began evaluating projects’ greenhouse gas emissions last year, the commission had no agreed-upon method for determining whether a project’s climate change impacts would be significant.

“The new policy is forward-looking,” said Commissioner Allison Clements, a Democrat who supported the changes. “It calls on the commission to consider market trends as well as policy and regulatory developments affecting the need for the project, currently and into the future.”

The updates intend to provide a “legally durable path forward” for the natural gas industry, landowners and other parties, said Democratic FERC Chair Richard Glick. For too long, FERC has failed to abide by its legal mandate to ensure that the projects it approves are in the public interest, Glick said.

“We need to consider all evidence as to whether a proposed project is needed,” he said. “This policy statement provides examples of how the commission will do just that.”

Still, Commissioner James Danly said the revised statement could discourage investments in gas infrastructure that may be needed to maintain a reliable energy system. It also contradicts FERC’s mandates under federal law, said Danly, a Republican.

Saying that he would have supported more limited revisions to the policy statement, Commissioner Mark Christie said the new policy goes beyond what would be “reasonable” changes. It could also open the door to prolonged litigation that can slow down needed gas projects, he said.

“This new certificate policy approved today is the mother of all legal weapons, and there is no question that it will be wielded against every single natural gas project,” said Christie, a Republican.

Separate from the policy statement, FERC’s “interim” plan for quantifying natural gas projects’ greenhouse gas emissions also lays out, for the first time, how the agency should determine whether projects’ climate impact may be “significant.”

Effective for both new and pending gas proposals, the policy asserts that projects emitting at least 100,000 metric tons per year of carbon dioxide equivalent would “have a significant impact on the environment.” A level of 100,000 metric tons of carbon is roughly equal to the greenhouse gas emissions of 21,700 cars driven for one year, and about 231,500 barrels of oil, according to EPA.

The threshold aligns with an Obama-era EPA standard relating to greenhouse gas emissions known as the “tailoring” rule, something the actual policy, once posted on FERC’s website, will explain further, Glick told reporters after the meeting (E&E News PM, Oct. 27, 2009). Under FERC’s plan, gas projects that would emit more than the designated threshold could still be approved if the benefits are found to outweigh the costs. However, the agency will conduct an environmental impact statement (EIS) — as opposed to a less-rigorous environmental assessment (EA) — for any gas project that exceeds that level.

The greenhouse gas emissions “trigger” provides new clarity for how FERC processes and regulates gas projects, said Sarah Ladin, an attorney at the Institute for Policy Integrity at the New York University School of Law. She noted that FERC has been completing supplemental environmental impact statements for some gas projects over the last year, despite having already issued environmental assessments for the same proposals.

“We won’t have to see the delays we saw, where there’s an EA first and [then] a supplemental EIS,” Ladin said.

In addition, the greenhouse gas policy outlines ways that project developers can reduce or “mitigate” their carbon emissions. It also says that FERC may condition the approval of a project on whether the developer commits to mitigating its emissions.

All aspects of the policy could be revised at a later date, although it is unclear when. The agency is accepting comments through April 4 to inform a potential long-term greenhouse gas emissions policy.

“We are going to, however, apply this policy in the interim, to allow the commission to process pipeline and LNG applications without delay,” Glick said.

Contrary to Democratic commissioners’ claims that it will provide greater certainty for the gas industry, the interim policy “creates more questions” for gas developers, said Amy Andryszak, president and CEO of the Interstate Natural Gas Association of America. For example, the statement does not explain the extent to which mitigation will be required for developers, she said.

“In the interim GHG policy statement, the majority established a seemingly arbitrary number to determine the significance of incremental GHG emissions from a project,” Andryszak said in a statement. “The Commission also suggests that developers may be required to mitigate the effects of emissions created by downstream natural gas consumption, but other federal agencies and the states — not FERC — have the legal authority to impose these requirements.”

Still, the significance level established by the policy may ultimately “have a small incremental practical impact,” ClearView Energy Partners said in a research note yesterday.

On the other hand, if the commission were to require developers to mitigate their emissions to a level below 100,000 metric tons of carbon dioxide equivalent, it could potentially create “an insurmountable bar” for getting projects approved, ClearView added.

FERC also initiated an inquiry considering whether to require transmission providers to use a type of technology that helps make the most out of electric power lines and can potentially boost renewable energy.

The inquiry seeks comments on the use of dynamic line ratings, a type of “grid-enhancing” tool that uses weather and other factors to improve the flow of power, according to the agency. Dynamic line ratings may ease grid congestion issues, which some say can impede the development of renewable energy projects (Energywire, Jan. 27, 2020).

Building more high-voltage transmission lines that can transport power across long distances may be necessary as the United States transitions toward more carbon-free energy resources, experts say. But while FERC is exploring reforms to improve transmission planning processes, it’s also important that the commission encourage better use of existing power infrastructure, Glick said.

In December, FERC finalized a rule requiring transmission providers to use a different technology — ambient-adjusted line ratings — that could also improve the efficiency of the electric transmission system. However, some commissioners and clean energy groups at the time called for the use of dynamic line ratings, as well.

Greater use of dynamic line ratings could help ease long delays facing renewable energy projects in some parts of the country as they seek to connect to the transmission system, according to the Working for Advanced Transmission Technologies Coalition, which has pushed FERC to encourage these and other technologies. There could also be benefits for consumers, said Commissioner Willie Phillips.

“There may be situations when dynamic line ratings can provide net benefits to customers by safely allowing more power flow and reducing congestion costs, or by detecting when power flows should be reduced to avoid unnecessary wear on equipment,” said Phillips, a Democrat.

Meanwhile, FERC announced that it has hired Nicole Sitaraman as deputy director for the Office of Public Participation.

Sitaraman was previously vice president of external affairs and policy at Sustainable Capital Advisors, a Washington, D.C.-based consulting firm. She also worked as senior manager of public policy at Sunrun Inc., a solar energy company, and in the Office of the People’s Counsel in Washington, D.C.

“I’m very excited that Nicole agreed to join us to become OPP’s first deputy director,” Glick said. “Her extensive experience in energy policy, consumer and environmental justice and equity issues will come in handy as the new office continues to focus on enhancing public participation in commission proceedings.”