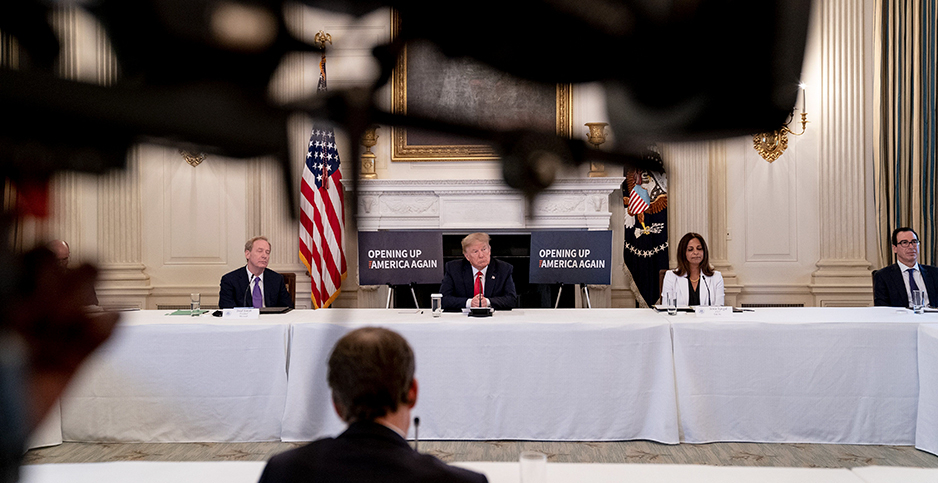 Microsoft Corp. made a bold promise earlier this year when the technology giant vowed to remove more carbon dioxide from the atmosphere than it emits within a decade.

That climate commitment, however, doesn’t extend to the company’s retirement program, which has pumped hundreds of millions of dollars into the fossil fuel industry.

A group of Microsoft employees has been pushing the company to change that. The internal effort, being reported here for the first time, includes more than 1,200 employees who want Microsoft executives to create an investment fund focused on companies with strong environmental, social and governance records.

That’s hard to do, and the Trump administration is trying to make it even harder. But Microsoft risks undermining its aggressive climate goals if it doesn’t try, according to employees involved in the initiative.

"It’s just such an obvious blind spot in its aspirations to go carbon negative," said an engineer at Microsoft who asked to remain anonymous to avoid putting his job at risk. "The inconsistencies are brought into sharp relief by the legitimately impressive commitments to improving our carbon footprint."

The company is only "willing to throw its weight around where it doesn’t interfere with their customers, like the oil and gas companies," the engineer said.

Earlier this year, the environmental advocacy group Greenpeace determined that the Redmond, Wash.-based company was likely "the biggest tech partner to the oil and gas industry."

Microsoft has cloud computing and data analysis contracts with fossil fuel producers such as Chevron Corp., a subsidiary of Exxon Mobil Corp. and several oil field services firms (Greenwire, May 19).

Microsoft’s $27.5 billion retirement program — one of the nation’s largest by value — is heavily invested in fossil fuels. At the end of last year, its 401(k) plan owned stock worth more than $84 million in oil, gas and coal companies or businesses that rely on them, according to an E&E News analysis of holdings disclosed last month.

That figure included $10.9 million in the oil major BP PLC; over $7.2 million in the parent company of Consumers Energy, a Michigan-based electric utility that gets 68% of its energy from fossil fuels; and nearly $6.8 million in BHP Group PLC, a coal mining company.

Other fossil fuel companies that received more than $1 million in investments from Microsoft and its employees include Russian oil companies Gazprom PJSC and Lukoil PJSC as well as China National Offshore Oil Corp., China’s largest offshore oil and gas producer. Many of them have taken a beating this year, as efforts to curb the spread of the novel coronavirus have slashed global energy demand.

Microsoft’s retirement plan also has hundreds of millions of dollars socked away in fossil fuel companies via opaque mutual funds and common collective trusts run by Pimco, Vanguard, Fidelity and BlackRock, according to Fossil Free Funds, a project of the nonprofit As You Sow.

For instance, more than 16.5% of its assets in the Vanguard Russell 1000 Value Index Fund are in fossil fuel companies, according to As You Sow. That means Microsoft employees have $210 million invested in oil, gas and coal in that fund alone.

The size of those fossil fuel investments has been amplified by the generosity of Microsoft’s matching program. Last year, the company contributed 50 cents for every $1 that employees saved for retirement, up to $9,500, with no vesting period for the matching money.

The engineer and another Microsoft employee who confirmed the existence of the internal initiative are among 1,250 workers at the company who signed a petition asking the company to help them align their retirement investments with Microsoft’s sustainability mission. That was 18 months ago.

Their main request was for the company to add an environmental-, social- and governance-focused option, or ESG fund, to the 401(k) program for employees concerned about the impact of their investments.

"There’s a lot of employees who are uncomfortable with this," the engineer said of Microsoft’s retirement plan, which has more than 101,000 participants. "So I think it will keep coming up, that internal pressure to make improvements there."

Currently, the only retirement investment option for employees who don’t want fossil fuel stocks is a more laborious brokerage option allowed by Microsoft. Through the brokerage, workers have access to a wide variety of fossil-free funds but without the administrative ease or fee-reducing leverage that working at one of the world’s most valuable companies would otherwise afford them.

ESG in the crosshairs

To be clear, Microsoft is not the only major corporation that has promised to combat climate change while steering its employees’ retirement funds into sectors that make the problem worse.

The contradiction is partially due to the Employee Retirement Income Security Act, a 1974 federal law that governs companies’ 401(k) and pension programs. It requires programs to be run "for the exclusive purposes of providing benefits to participants in the plan and their beneficiaries."

Over the years, the Department of Labor, which administers the law, and the courts have taken a narrow view of what those "benefits" can be: higher returns on investments with little room for broader social considerations.

"It’s a real green eyeshades view of investing," said Max Schanzenbach, a professor at the Northwestern University School of Law, referring to the visors accountants once wore to lessen eye strain from candlelight.

To exclude any asset class from a retirement plan, the fund manager and plan administrator would have to justify their moves strictly on financial grounds, explained Schanzenbach, who’s written extensively about pension law.

"If there’s a mutual fund that says, ‘We’re divesting from coal because we think coal is a dog,’" he said, "that’s consistent with risk and return benefits."

But they would have to rigorously document their decisionmaking in case of a federal audit or lawsuit, potentially led by an employee who’s upset about lackluster returns. The same goes for adding an ESG offering, which would likely be an easier lift.

As a result, the retirement programs of most major corporations are suffused with fossil fuels.

Microsoft’s program is "no different than any other company," said Andrew Behar, the CEO of As You Sow. "Every company in the S&P 500 is out of alignment with their sustainability goals and their 401(k) plans. They don’t take it into consideration when they set their goals, and this is a real problem."

Sustainable finance advocates believe ESG funds, which eschew investments in polluting companies, could help close that sustainability gap. They currently make up a small but growing portion of the market for mutual funds, many of which are actively managed to maximize returns, and exchange-traded funds, most of which passively track a broad index of stocks like the S&P 500 or Nasdaq composite.

Sustainable funds saw nearly four times more investment inflows last year than in 2018. Yet they still made up less than 1% of the $20.7 trillion market for mutual and exchange-traded funds, according to Morningstar Direct, an investment analysis platform.

During the Trump administration, ESG funds have received outsize scrutiny.

In April 2019, President Trump ordered the Labor Department to review retirement plans’ investments in the energy sector. And in recent months, the department has stepped up its scrutiny of companies with ESG funds in their 401(k) programs.

"A number of our company members had actually received questionnaires seeking additional information about how they’re evaluating these investments," said Lynn Dudley, the senior vice president of global retirement and compensation policy at the American Benefits Council, a trade association that advocates on behalf of employer-sponsored retirement plans.

One questionnaire obtained by E&E News asks an undisclosed company to provide an investigator at the Labor Department’s Employee Benefits Security Administration with more than a dozen types of documents relating to its decision to offer ESG funds.

Signed by one of the administration’s regional directors, the letter requests more than three years’ worth of portfolio statements for any holdings that were made based in part on ESG factors. It also asked for meeting minutes regarding those investments and all communications describing the funds.

"My understanding right now is, it’s early days in this process," Dudley said late last week. "No one’s been penalized or called on the carpet, so to speak."

Days earlier, Labor Secretary Eugene Scalia had proposed a regulation that critics believe would make it even harder for companies to justify offering ESG funds to employees (Energywire, June 29).

The American Benefits Council — which counts Microsoft among its members along with oil and gas companies — views the rule as a needed clarification. While Dudley and others at the council have lobbied on "Environmental, Social and Governance (ESG) principles in investing," she said the group remains agnostic on the role of ESG funds in retirement plans.

"We’ve been responsive to folks that have asked us technical questions on the Hill," Dudley said. "We haven’t actually taken a position on any proposed legislation."

Some members that aren’t in the fossil fuel business, however, have raised concerns with the council about difficulties they’ve had offering ESG funds to employees or removing polluters from their 401(k) programs.

It’s unclear if Microsoft is one of those members pushing to change the law that’s effectively forcing it to stay invested in planet-warming companies.

"We offer employees a range of investment options that give them an opportunity to diversify their portfolios, as required by law and fiduciary obligation, including access to hundreds of ESG and [socially responsible investment] options through the plan’s brokerage window feature," the company said in a statement.

Microsoft emphasized that although it does not "direct or control how our employees invest," it does "work with investment managers on how they incorporate ESG considerations in their portfolios."

But Microsoft could also offer a dedicated ESG option to its employees "if they think that that is a reasonable fund to generate returns given the risk that the fund creates for the beneficiaries," said Schanzenbach, the Northwestern law professor.

Yet Dudley, whom E&E News interviewed at Microsoft’s suggestion, argued the company should wait for more guidance from Labor on what an ESG fund really is.

"The rules that exist today are not really clear," she said. Once Labor’s ESG proposal "is put in place, like I assume it will be, it will be clear what the process is."

Back in Redmond, Microsoft employees are still waiting for the company to match its retirement program with the tech giant’s climate goals.

"They acknowledged that this was a concern of employees and they want to make improvements," the engineer said, referring to Microsoft executives. "They all sound like they get it. They just move very, very slowly."