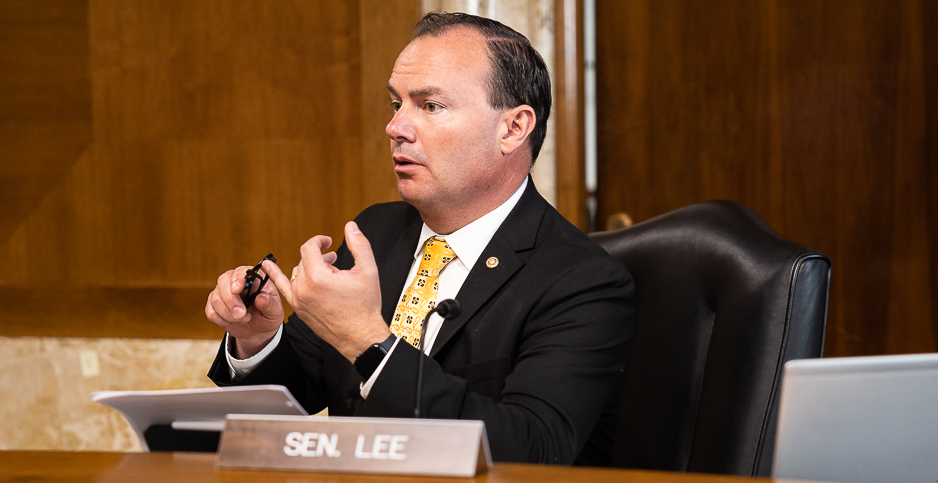 Senators trying to pass a broad energy policy package have run into a new hurdle in their attempts to resurrect the bill: the senior Republican senator from Utah.

Mike Lee has emerged as one of the last major obstacles in the push to resurrect the Senate’s stalled S. 2657, backed by Energy and Natural Resources Chairwoman Lisa Murkowski (R-Alaska) and ranking member Joe Manchin (D-W.Va.), multiple people familiar with the matter confirmed to E&E News.

Lee is attempting to force a vote on one of his amendments to the bill. He filed eight in February, and it is unclear which one he’s prioritizing.

His opposition comes even as bill boosters appeared to have made a breakthrough on a voluntary building codes amendment from Sens. Rob Portman (R-Ohio) and Jeanne Shaheen (D-N.H.) that had emerged as another hurdle (E&E Daily, Sept. 21).

When asked about Lee’s amendment request, his office replied the premise was "fake news" but declined to elaborate.

One of Lee’s amendments would open some areas surrounding Grand Canyon National Park to uranium mining. New mining is forbidden in about 1 million acres since the Obama administration.

Another amendment would add Utah as a state exempt from national monument expansion under the Antiquities Act. Utah has long complained about sweeping presidential edicts that remove large tracts of public lands in the state from economic activity.

Lee has an amendment to remove most major energy tax credit provisions from law, including the efficiency, renewable and electric vehicle credits.

He also wants to remove funding for the Advanced Research Projects Agency-Energy despite the bill increasing its spending authorization to $750 million, as well as remove a section in the bill dedicated to a new clean energy workforce development program.

The energy package and its nearly $24 billion in research and development spending authorizations moved with bipartisan support in late February, but a separate dispute from the Environment and Public Works Committee on how to phase down hydrofluorocarbons (HFCs) caused the bill to fail on a procedural vote in March.

Murkowski and Manchin have been spotted on the Senate floor huddling with senators seeking to break the impasse. That included Lee earlier this week.

"We’re close, we are very close," Manchin said this morning in an appearance at the National Clean Energy Week virtual conference.

"If I was a betting man, I’d give it 75%" chance it gets enacted into law this year, Manchin said. "My reason for that is we are better than 50/50 right now. We have worked out most of the kinks."

Manchin raised the prospect that the impending Supreme Court battle could affect progress as Democrats have already shown a willingness to bring the Senate to a standstill over the issue. Yesterday the minority blocked certain hearings from happening.

"We are the only committee still working and getting something done," Manchin said. "So our [bill] is ready to come to the floor. If they use it as a pawn, I hope not. I will argue with leadership from both sides that we’ve done what we are supposed to do under regular order. … Don’t use us as a pawn or a tool for the political differences that the parties have right now."

The House is also debating energy reform legislation this week. Leaders are looking to negotiate a deal with the Senate (E&E Daily, Sept. 23).