Skeptics named as finalists for Science Advisory Board 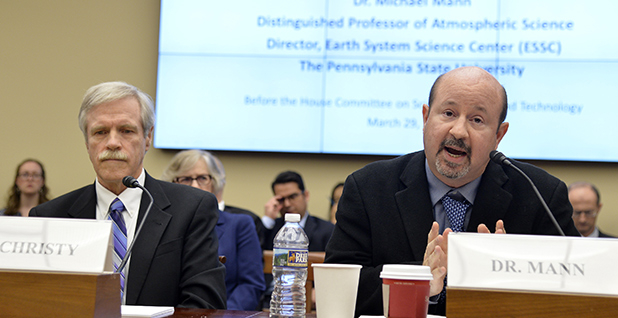 John Christy (left), a professor at the University of Alabama who criticizes mainstream climate science, testified at a Capitol Hill hearing opposite Pennsylvania State University professor Michael Mann. Christy is one of many candidates for EPA's Science Advisory Board. Mike Theiler/UPI/Newscom

Finalists for EPA’s Science Advisory Board include researchers who reject mainstream climate science and who have fought against environmental regulations for years.

Among them is an economist from the conservative Heritage Foundation whose work was cited by President Trump as a justification for withdrawing from the Paris climate agreement. Another downplays the dangers of air pollution. Several scientists are from energy companies like Exxon Mobil Corp. and Chevron Corp., and the list includes a researcher who argues that more carbon dioxide is good for the planet.

A few are associated with the Heartland Institute, which has advocated for the rejection of climate science to lawmakers, teachers and voters. Among its efforts is the publication of books, like the "Roosters of the Apocalypse," which describes climate change as an "apocalyptic prophecy" (Climatewire, April 2, 2012).

The agency released a list of 174 nominees yesterday and will accept public comment until Nov. 7. The Science Advisory Board provides EPA with expert advice on a range of scientific and technical issues. Former Administrator Scott Pruitt sought to reshape the SAB by forcing off academic researchers who received agency grants, while elevating those who were funded by industry.

The latest round of selections, which will be made by acting Administrator Andrew Wheeler, could shift the makeup of the board toward an industry viewpoint as EPA weighs a number of deregulatory actions. It currently has 44 members.

Last week, Wheeler replaced five of seven members on the agency’s Clean Air Scientific Advisory Committee. He weighted the panel with industry voices and regulators from states critical of regulations adopted under former President Obama (Climatewire, Oct. 11). EPA also disbanded an affiliated panel that had been working on an assessment of the current limits on airborne particulates.

The list of finalists from which Wheeler will select the newest members of the SAB includes academics whose work has been funded by the premier science agencies in the United States, such as the National Science Foundation, NOAA and the National Institutes of Health.

However, many stand out for fighting against climate science and agency regulations. The work of several has been used to justify rolling back environmental rules.

James Enstrom, who has served as a policy adviser for the Heartland Institute and is a retired professor from UCLA, has received funding from the tobacco industry to produce research that downplays the risks of secondhand smoke. He has said that his work negates the research of air pollution experts who connected fine particle air pollution, or PM2.5, with premature deaths.

A description of his qualifications for the appointment said that Enstrom’s research, which has vastly different conclusions from those of the majority of scientists, justifies rolling back EPA regulations on air pollution, known as National Ambient Air Quality Standards (NAAQS).

"His research shows that the EPA PM2.5 NAAQS is scientifically unjustified and must undergo complete and objective reassessment," says the description submitted to EPA.

Richard Belzer is an independent consultant on regulatory economics who has worked for a number of conservative think tanks, including the Competitive Enterprise Institute and R Street Institute. His recent clients include Exxon Mobil, the American Chemistry Council and Fitzgerald Glider Kits, which is pushing EPA to roll back air pollution protections on heavy trucks.

Belzer has encouraged the Trump administration to go after EPA’s endangerment finding for greenhouse gases, a scientific determination that provides the legal underpinning for agency regulations on climate-changing emissions.

"The goal here is not to change the policy but to correct the science," Belzer said at a conference hosted by the Heartland Institute last year.

John Christy, another nominee, is Alabama’s state climatologist and a professor at the University of Alabama, Huntsville. He’s a favorite of congressional Republicans who reject mainstream climate science and says that human-caused global warming has been exaggerated. At a House Science, Space and Technology Committee hearing, he was one of the first to suggest that a "red team" climate debate could contest established findings on global warming. He has also called on EPA to revisit the endangerment finding and has said that it is not scientifically valid.

Anthony Lupo, a professor of atmospheric science at the University of Missouri, Columbia, has argued that global warming is natural, not man-made. He co-founded Climate Exit, or "Clexit," which asserts that rising levels of carbon dioxide benefit the Earth.

Kevin Dayaratna is a senior statistician and research programmer with the Heritage Foundation. He was invited to attend Trump’s announcement to withdraw from the Paris Agreement in the Rose Garden in June 2017, and his work was cited by the president as a reason to quit the accord. He says in his work that the agreement could shrink the U.S. gross domestic product by $2.5 trillion within two decades. (Trump stated that it would arrive within a decade.) The report was criticized by some as being misleading, because that amount is less than 1 percent of the aggregate GDP over that period, and the report did not account for the cost of taking no climate change action.

William Happer, an emeritus physics professor at Princeton University, is also on the list. Happer helped Pruitt develop the red-team concept and heads the CO2 Coalition, which received $150,000 in funding from the Mercer family in 2016 to suggest that more carbon dioxide would benefit humans.

Happer was recently appointed to serve on the Trump administration’s National Security Council as the senior director for emerging technologies.