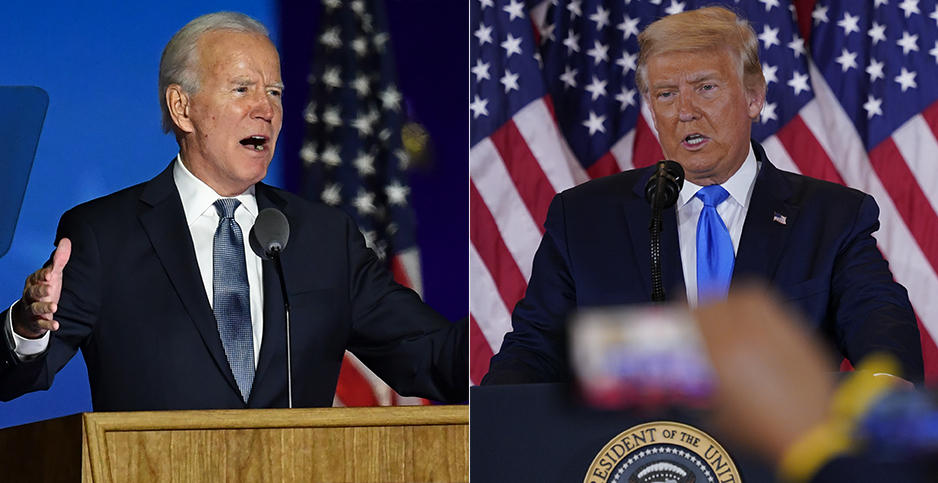 The winner of the 2020 presidential election remained unknown this morning as officials in a handful of states continued to count votes.

The delay in results was widely expected going into Election Day, and is mainly because of the unprecedented levels of early and absentee voting spurred by the COVID-19 pandemic.

The standstill appears likely to last days, despite President Trump’s false assertion this morning that he had already won his reelection bid against Democrat Joe Biden.

"This is a fraud on the American public. This is an embarrassment to our country," Trump said in a brief, defiant early-morning news conference from the White House, given before a crowd of supporters, many of whom are government officials.

The president appeared to be claiming, without evidence, that officials were still allowing votes to come in hours after polls closed.

Shortly before the news conference, Biden gave his own upbeat speech to supporters in Wilmington, Del., similarly projecting confidence, but not openly declaring victory.

"We’re feeling good about where we are," Biden said. "We believe we’re on track to win this election."

As is frequently the case, the race has come down to a handful of states, with the winners of almost all others settled early.

Pennsylvania, Wisconsin and Michigan are likely to take a while — up to a few days — to finish counting their votes.

The states are crucial to Biden’s strategy to unseat Trump, and winning any two would likely put either candidate over the 270 Electoral College votes needed for victory. Trump won all three in 2016.

Pennsylvania is under special scrutiny. It has never dealt with anywhere near the volume of mail-in votes it has received, and state law didn’t allow officials to start counting those ballots until the morning of Election Day.

The president was ahead in the vote count this morning, but areas likely favorable to Biden have plenty of ballots left to count.

Arizona and Nevada are both swing states likely to go to Biden, but the states remain officially undecided, save for Fox News’ projection that Arizona went for the Democrat.

Georgia is not traditionally considered a swing state, but its vote count is close, and some votes in the Atlanta area, considered friendly to Biden, had yet to be tallied.

As of this morning, major news outlets had identified only one Electoral College seat that Biden had flipped from Trump’s 2016 tally: Nebraska’s 2nd District.

The state, unlike almost all others, apportions two of its electoral votes to the statewide winner and one each to the winners in each of the three congressional districts.

Polls had given Biden good chances of winning numerous swing states, including Florida, which Trump appears to have won easily by at least 3 percentage points.

Environmental groups joined Biden and his allies in encouraging electoral officials to allow every vote to be counted, and pushing the public to accept that it might take time.

"Like everything in 2020, this election is unprecedented. This election’s overwhelming voter turnout demonstrates that together, we can restore the promise of our democracy," Sierra Club Executive Director Michael Brune said in an early morning statement.

"In spite of the threats of the climate crisis, the ongoing pandemic and economic disaster, voters believe deeply in the power of our democracy and are committed to fighting for a just, sustainable and equitable future."

He said, "That is why it is more important than ever to say loud and clear that every vote must be counted because every single one of us counts. Millions of us turned out despite unprecedented voter intimidation and suppression tactics and our voices deserve to be heard."

Tamara Toles O’Laughlin, North America director at 350 Action, said in a statement, "We are holding the line and demanding that officials count every single vote. We will not accept false claims of victory from Donald Trump, and we urge Biden to remain steadfast as every vote is counted."