‘We got way off course’ — likely new House Science chair 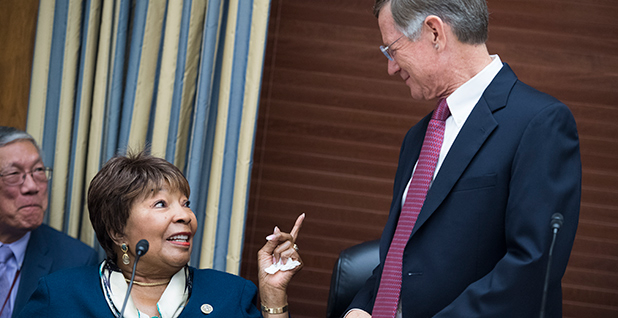 Rep. Eddie Bernice Johnson (D-Texas) has never had a conversation with former EPA Administrator Scott Pruitt — but she’d like to question him soon about his handling of science at the agency.

It’s been a week since Democrats won enough seats in midterm elections to take control of the House, and Johnson is starting to discuss preliminary ideas for the Science, Space and Technology Committee if she becomes chairwoman, which is expected.

Johnson has outlined a three-part agenda, including restoring the committee as "a place where science is respected and recognized," ensuring that the "United States remains the global leader in innovation," and addressing the "challenge of climate change, starting with acknowledging it is real."

The committee got "off course" in the past six years under Chairman Lamar Smith (R-Texas), she says.

If she becomes chair, Johnson would be the first African-American woman to lead the Science Committee. She also was the first registered nurse elected to Congress.

"I think that the fact that [Johnson] has a background in nursing will bring a different perspective … which will be based on facts and evidence rather than antipathy toward climate change," said Shaughnessy Naughton, founder of 314 Action, a political action committee aiming to elect scientists to public office.

Johnson spoke with E&E News about her plans:

Whom have you met with since the election, or whom you are planning to meet with?

Do you foresee any changes to the committee structure, or any reshuffling of subcommittees?

We will see. I have to be sure that I’ll be elected. We certainly will review it. I don’t see as much of the structure that needs to be changed. I think that the attitudinal change will be inherent in my chairmanship.

What do you mean by that?

Well, the leadership — I think that there was an attitude of suspiciousness toward scientific endeavors. I think it’s appropriate to have an attitude of question, of clarification, but not suspicion.

As you know, the subpoena power changed under Smith. … Do you think he exploited it?

Well, I never even knew when he was going to be using it. Although he said we would do it together, it never happened. Many times, as well, we would get notice of hearings on a weekend when they were going to be the following Tuesday, which did not give much time for the witnesses or us to be quite ready. I think that that is a no-brainer that needs to be improved.

What would be your oversight priorities?

Much of that will depend after we explore. Oversight to me has been in place as a responsibility for as long as the committee has been there. I think we’ve gotten off course from it, and I hope to get back on course. Oversight will include just about all of the activities of the agencies of which we have jurisdiction to oversee.

Is there anything in particular with oversight, say, in terms of EPA’s handling of science?

The agencies, of course, have changed quite a bit since we’ve had a new president … a very unorthodox president, and his Cabinet seems to be the same as he is. We’ll have to review all of that.

Would you be interested in looking at how Pruitt developed a ban on grant recipients [serving on EPA advisory committees]?

I think it’s worthy of review. We certainly will. I’ve not had a chance to even meet Mr. Pruitt. Hopefully, there’ll be an opportunity to do that, to have some kind of conversation. We’ve done that with some of the agency leadership, and some we’ve not.

Both Reps. Frank Lucas and Randy Weber (R-Texas) have announced their intent to be ranking member. Do you have a preference?

I’ve worked with Mr. Lucas; he’s the vice chair now. I’m hoping he’ll become ranking member. I really do believe there will be a better relationship. Although I can’t say that … I didn’t have a disgruntled relationship with Lamar Smith, I just disagreed with most of his direction. We were able to get along. I just disagreed, and he was aware of my disagreement.

I don’t anticipate having that rancorous relationship with whomever it is because I think that — this committee to me is such a scientifically oriented committee that if you respect science, there’s very little argument there. We’re not the scientists. We’re the ones who help to look out for the opportunity for the scientists. We’ve had some elements of the leader thinking he is the scientist and should be directing the scientists. That is not the role of the committee.

You put out a statement last week saying you wanted to address the problem of climate change. How, specifically, would you do that?

How, specifically, we have not yet determined because we have not even organized yet, but we know what the challenges are. We have some ideas to how we might get to the knowledge and procedure which we can address it. The information is not foreign. We are experiencing climate change every day. What we have to decide is a sensible course of research, and sensible course as recommendations for addressing the issues related to climate change.

Republicans on the committee make a lot of arguments about what causes climate change: sun spots, etc. How would you go about countering those arguments?

The science itself will have to do that.

I think it has, because we got way off course and tried to direct researchers, trying to interfere with the findings of research. That is not the role of the committee. Our role in the committee is to have oversight, to be sure that the opportunities are there, to make sure that there’s credibility in the research with oversight responsibilities, but we are not the researchers.

How would you restore credibility?

By fair and open direction, and fair and open dialogue, and allowing persons in charge to explain themselves and to function as professionals and not try to determine what their outcomes should be.

Do you mean agency heads?

Yes, agency heads. Traditionally, we’ve had a good relationship with agency heads. We’ve not had much relationship the last few years because there’s been very little opportunity for them. We’ve had many hearings on issues where the agency heads were never even contacted.

What is your impression of Energy Secretary Rick Perry?

I’ve known Rick Perry for 35, 40 years. He hasn’t changed very much over those years. I think that as secretary of Energy, it could have been worse. I think that he probably surprised a few people, because he has not seemingly made any attempts to curb the research and activities of the department. He seems to have spent time going and visiting all of the labs. He seemed to be impressed with the work of the labs. And he said very clearly it was up to us what direction that the Department of Energy would go on the committee. I’m not sure that I have any particular criticism, because I think he surprised a lot of people.

What about [acting Administrator] Andrew Wheeler at EPA?

I don’t know anything about the EPA leadership. We’ve had very little contact. I don’t like the rollback of some of the protective rules.

You and Smith clashed a lot. What did he do that you most disagreed with?

It was no secret. I was very clear about the things that I disagreed with, very clear about the unnecessary badgering that I think that came from people who were honestly attempting to do their jobs. Also, the biases he made sure were present in the witnesses that he invited.

What kind of biases?

He always wanted someone who was going to agree with his theory, which was sometimes not a valid theory.

Are you referring to climate skeptics mainly?

Well, across the board. Not just climate. There were a number of issues. He was attempting to always undermine some of the findings, scientific findings. Trying to undermine which way the National Science Foundation would let research grants go. Attempting to determine what the research grants would be about. All of that I had some disagreement about. We’ve had a historic performance of the National Science Foundation. It’s been aboveboard … and I thought that was an attempt to interfere with that.

So what would be your parting words for Lamar Smith?

We have a good relationship. We’ll probably continue that.

Sexual harassment: How much of a priority would you make that?

Well, we’re looking at sexual harassment, gender bias within the scientific world. We will have legislation to address it. We want to make sure that women can come into these research fields across the board and not feel intimidated because of an agenda.

Does the committee need to be more bipartisan, in your mind, and if so, how?