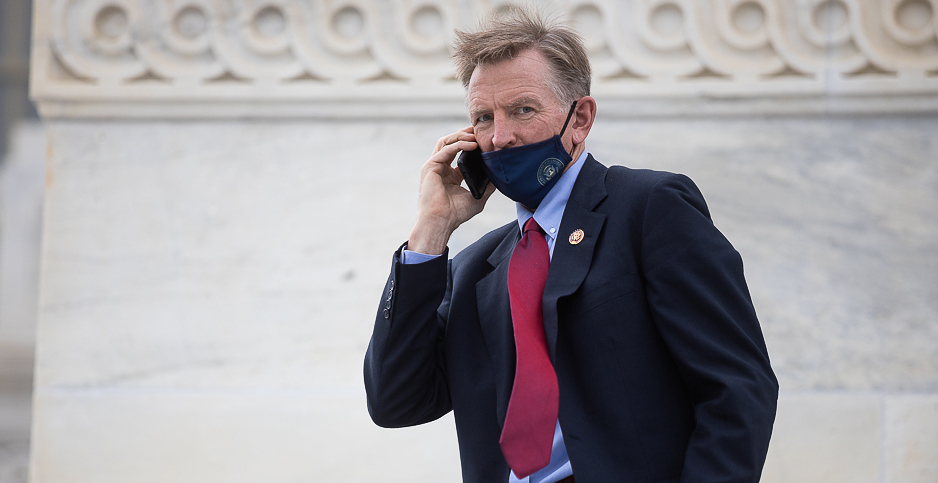 Grijalva is one of the latest senior Democrats to demand that GOP colleagues, not just outgoing President Trump, be held accountable for the insurrection that left five dead, including two U.S. Capitol Police officers.

"I think that any investigation that occurs needs to not be just about Trump," Grijalva told E&E News yesterday. "There was culpability in that excitement that extends to members of Congress and members on this committee, and they need to be looked at as closely as anybody else."

He added, "This is not going to go away. There’s no way."

Grijalva said he plans to "press the point" to the Natural Resources Committee’s incoming ranking member, Rep. Bruce Westerman (R-Ark.), that certain members should face consequences for promoting false allegations of voter fraud in the 2020 presidential election that culminated in the riot.

Gosar — whose siblings reached out to Grijalva for help in having their brother expelled from Congress, according to The Arizona Republic — is the current top Republican on the Natural Resources Subcommittee on Energy and Mineral Resources — and at the top of Grijalva’s list for a demotion.

"The majority of the Republicans on the Resources Committee voted not to accept [Arizona’s results], and that includes the incoming ranking member, but there were some that were actually involved," Grijalva said.

"Are you going to have Gosar as the ranking member of a subcommittee and allow him to continue to have a platform to spew what he does? It calls into question what kind of forum and what kind of credibility do you give these people," he said.

Westerman actually voted against objecting to the certification of Arizona’s results.

Grijalva named Rep. Louie Gohmert (R-Texas), a longtime committee member, as another lawmaker who should not escape scrutiny for his advocacy of voter fraud theories and encouragement of the riots.

Last summer, a maskless Gohmert spoke at length during a Natural Resources Committee hearing before learning he had COVID-19 — and may have been the individual who gave Grijalva his positive diagnosis (E&E Daily, Aug. 3, 2020).

Grijalva also questioned whether Rep. Lauren Boebert (R-Colo.) should be seated on the panel, as she has requested. Boebert is a freshman who supported the pro-Trump demonstration in Washington against the certification of Biden’s victory over Trump and has been agitating for the right to carry a semi-automatic pistol inside the Capitol complex.

"We’re going to press the point that culpability and responsibility is attached to some of these members," Grijalva said. "They need to own up to it, and the [Republican] caucus needs to own up to it."

Ultimately, Grijalva stressed that he has no power to unilaterally boot Gosar from his committee leadership post, nor can he dictate who else Westerman can assign to serve on the panel and in what roles.

While he acknowledged that House Democrats could push to adopt some sort of committee rules package that would bar certain members from serving in certain capacities, yesterday he seemed more interested in exerting pressure as his primary forcing mechanism.

Grijalva has yet to discuss the matter with Westerman but said their staffs were working to schedule a call or meeting. Westerman’s office told E&E News that no committee member decisions have been made at this point, and Gosar’s office declined to comment.

Grijalva did indicate, however, that the Natural Resources Committee could play a part in investigating the larger fallout from the riots.

The chairman said his panel was "looking into" the role of the U.S. Park Police in containing the violence last week — specifically that they were nowhere to be found.

This was not the case over the summer, when Trump dispatched officers to disperse chemical irritants into a crowd of largely peaceful demonstrators in Lafayette Square calling for the end to police killings of Black Americans.

"The Lafayette Square thing is a really interesting comparison to what the hell’s going on now," Grijalva said. "It’s almost the same questions we asked regarding Lafayette. We’re going to ask — I mean, the Park Police weren’t there this time. They were there last time. OK?"

Rep. Tim Ryan (D-Ohio), the chairman of the House Legislative Branch Appropriations Subcommittee with jurisdiction over funding the Capitol Hill security operations, said yesterday his ongoing review of the Jan. 6 incident also would examine why the Park Police did not provide any backup.

"You know, we did not see much involvement," said Ryan, noting that he’d originally been told by the House and Senate sergeants-at-arms that Park Police would be available for backup in the event they were needed.