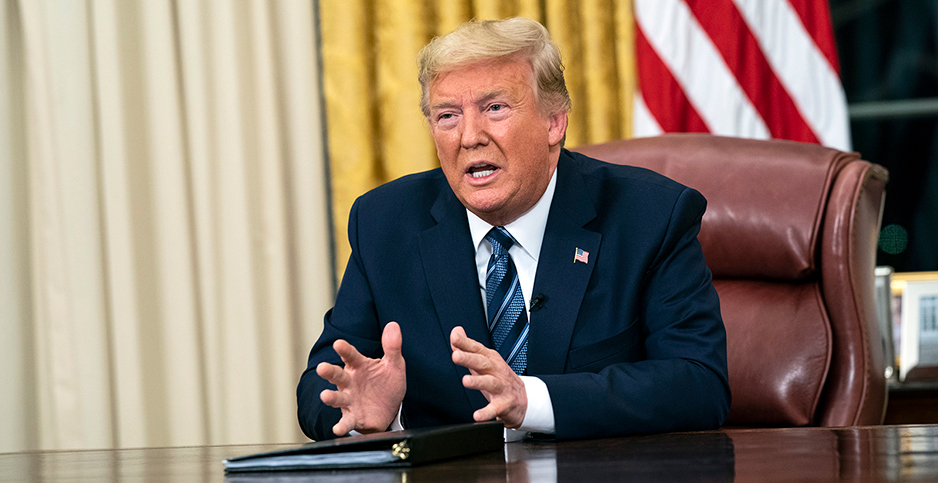 President Trump's remarks on the new coronavirus echo his comments on climate change. He claims that America is ahead of other nations on both issues. Joyce N. Boghosian/White House/Flickr

President Trump echoed his administration’s contested comments on climate change when he claimed in his Oval Office address Wednesday that no one is better at dealing with the new coronavirus than the United States.

The showmanship of a president who sought to convince Americans that the federal response to the ballooning pandemic is cutting-edge, instead of faltering, resembled his own assertions that the United States is driving down emissions faster than other nations.

"It is a failing, I mean, let’s admit it," Dr. Anthony Fauci, director of the National Institute of Allergy and Infectious Diseases, told lawmakers yesterday when asked about the availability of tests for COVID-19, which the coronavirus causes.

"The idea of anybody getting it easily the way people in other countries are doing it? We’re not set up for that," he added. "Do I think we should be? Yes, but we’re not."

European economic markets tanked as soon as Trump finished speaking Wednesday. Stocks on Wall Street fell so quickly yesterday morning that trading had to be temporarily halted, and the Dow Jones Industrial Average experienced one of the sharpest drops in history.

Trump’s claims about American superiority at managing the pandemic touches on a rhetorical theme of his presidency: that he’s doing his job better than everybody else. In his Oval Office address, Trump blamed Europe and China for mishandling the coronavirus while praising his own response.

He said, "No nation is more prepared or more resilient than the United States."

That echoes the way Trump talks about climate policy.

Trump and a number of administration officials have assured the world that the United States is handling the growing threat of global warming, even as the administration rolled back climate policies and promoted fossil fuels.

"Every single one of the signatories to the Paris climate accord lags behind America," Trump said in July during the first major environmental speech of his presidency, touting the United States’ success in reducing greenhouse gas emissions.

His claims of leading the world on climate change are as contested as his assertions on the coronavirus. The United States is one of the biggest emitters of greenhouse gases in the world. And its emissions are falling more slowly than those of many other nations. They actually rose 3% in 2018 before falling an estimated 2% last year, as the energy sector shifted away from coal.

That reduction is the result of natural gas and renewable energy replacing coal, not because of a climate policy designed to cut carbon emissions, said Joseph Majkut, director of climate policy at the Niskanen Center.

"If you use the wrong indicator, you can deceive yourself," he said. "It’s not the result of intentional efforts to reduce greenhouse gas emissions. We’re not decarbonizing our economy fast enough to meet any reasonable climate goal."

Meanwhile, the European Union is expected to consider tightening its 2030 commitment to the Paris Agreement later this year because it’s on pace to outperform its goal to reduce emissions 40% compared to 1990 levels.

On coronavirus, the United States is lagging in its preparation behind other countries.

Trump’s former homeland security adviser Tom Bossert described the president’s decision to ban most flights from Europe as a "Poor use of time & energy." A lack of planning in the United States, he said, could help spread the virus back to other countries.

"The irony is that if we don’t implement aggressive community interventions and mitigate the spread of the virus already in the United States, we will end up infecting or reinfecting Europe," Bossert tweeted.

South Korea and other countries have aggressively battled the disease by setting up drive-through testing stations. China quarantined the entire city of Wuhan. Italy has halted nearly all economic activity to isolate the virus.

Trump and his team have spent years misrepresenting the facts on climate change. Cabinet members, from EPA Administrator Andrew Wheeler to Secretary of State Mike Pompeo, have repeated the refrain that the United States leads the world in cutting greenhouse gas emissions.

That claim has always been misleading, and it has become less true as the Trump administration has progressed.

Take Wheeler’s statement to the House Energy and Commerce Committee last month that the United States is "reducing our CO2 greater than the other [Group of Seven] members."

"Our CO2 emissions have fallen 14% since 2005 in this country," Wheeler said. "We’re on a good track in reducing our greenhouse gases compared with other industrialized countries."

The 14% figure comes from last year’s EPA greenhouse gas inventory, which tracked emissions through 2017. The major factors in that decline were the shift from coal to natural gas for power generation and dampened demand due to improved efficiency — changes that were baked in when Trump took office.

Alden Meyer, director of strategy and policy at the Union of Concerned Scientists, said that the Obama administration, along with state action and economic forces, played a larger role in reducing emissions since 2005.

"It’s kind of bizarre, actually," he said. "They’re trying to take credit for a trend they don’t support, and don’t welcome because it hurts their donors in the coal and oil industry."

At U.N. climate conferences and appearances on Capitol Hill, Trump administration officials have credited the president’s policies and "innovation" for turning the tide on greenhouse gas emissions.

"In international climate discussions, we will continue to offer a realistic and pragmatic model — backed by a record of real-world results — showing innovation and open markets lead to greater prosperity, fewer emissions and more secure sources of energy," Pompeo said last year when he announced the formal process of withdrawing from the Paris Agreement.

But the results he cited has proved to be reversible. Two weeks before Wheeler spoke at the House committee hearing on EPA’s fiscal 2021 budget request, his own agency released a draft version of this year’s greenhouse gas inventory showing that growing power demand linked to a hot summer and other factors had driven emissions higher in 2018. U.S. emissions through 2018 are just 10% below 2005 levels.

That contrasts sharply with some G-7 members.

The United Kingdom has cut its greenhouse gas emissions 28% since 2008. The European Union is on track to cut emissions by almost 50% compared with 1999 levels by 2030, according to Climate Action Tracker. Japan and Canada are showing fewer reductions, though the Germanwatch index shows both outperforming the United States.

Large segments of the American public might be indifferent to U.S. climate performance. But the coronavirus might be a sterner test of Trump’s ability to claim world-leading results where none exist.

"I think if the president and his team are beating their chests and claiming credit for what a great job they’re doing, they’re going to be exposed very soon," said Meyer.