10 things to know about Ryan Zinke 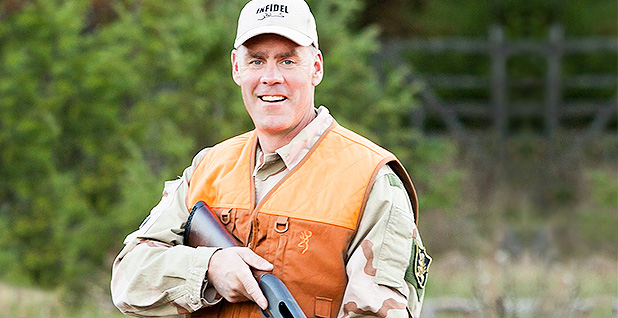 Interior Secretary-designate Ryan Zinke (R-Mont.). is an avid hunter, a Navy SEAL veteran and a vocal critic of the Obama administration. Photo courtesy of @RepRyanZinke via Twitter.

Ryan Zinke has helped kidnap an accused war criminal, keeps an arsenal of serious knives nearby when he’s working and answers to "Z Man."

Zinke, who is President-elect Donald Trump’s pick to lead the Interior Department, also thinks the Keystone XL pipeline and hydraulic fracturing have gotten a bad rap, and warns that "false tears for the sage grouse" have hurt energy development.

The 55-year-old Montana Republican congressman is a relative newcomer to politics, having served just one term in the House, and isn’t yet well-known on the national scene. That’ll change tomorrow, when he heads to the Senate to testify before the Energy and Natural Resources Committee.

Here are 10 things to know about Zinke as his Senate vetting kicks off:

His Senate confirmation hearing promises to be intense, but Zinke has endured some grueling physical and psychological challenges.

He scored a full-ride scholarship to play football at the University of Oregon, where he was a 225-pound offensive lineman up against much bigger guys. "To have a guy of Ryan’s size, which is small, you’ve got guys playing with you that are 350 pounds," McEwen said in an interview. The fact that he started on the Division 1 team "tells you not only that he’s strong, but he’s tough."

Zinke also survived Navy SEAL training, which included intense physical exercises, sleep deprivation and "Hell Week," where recruits in their tents experienced a "noise-and-smoke assault on the senses" and were ordered into the Pacific Ocean, where they approached hypothermia before they were ordered out onto the beach to crawl while machine guns "blazed above us," Zinke wrote in "American Commander." During some of the cold water exercises, "your testicles are climbing up into your stomach to escape frigid water," he wrote.

Those who want to quit can ring a bell and get coffee and doughnuts, and most trainees don’t make it. But Zinke powered through. "I never want to fail," he said in the book. "Let’s call it a soul-deep detestation of failing, of not doing my duty. That is an enormous driver. It has defined me."

He picked his college major at random.

Zinke majored in geology at the University of Oregon. He picked it by "closing my eyes and randomly pointing to a major from the academic catalog."

He added, "I never looked back."

His college teammates dubbed him "The Professor," and he received an award for academic achievement and attitude his senior year, according to his book.

Zinke likes the Keystone XL pipeline proposal and fracking, and he thinks the government has been heavy-handed in its approach to sage grouse. His book refers to the "Obama administration’s war on fossil fuels."

He called the rejection of Keystone XL "ill-advised quashing" and said opponents of fracking "haven’t done their homework." He said "solar and wind sources don’t have the economies of scale yet to deliver cost-efficient energy the way coal can."

And he criticized "D.C. bureaucrats who have publicly stated that oil and gas exploration is responsible for the decline of the sage grouse population in Montana." He said the West Nile virus, coyotes, hawks and wildfires "are far more detrimental to sage grouse than a pump jack."

He keeps a knife arsenal near his desk.

Zinke keeps about a dozen Navy SEAL knives in his congressional office. He showed off the collection last year to the Stars and Stripes military newspaper.

Those knives "span the history of the underwater demolition teams and SEAL teams," McEwen said. "It’s almost a definition of why [Zinke] believes that government spending can get out of control as well.

"He analogizes that the first knife in the SEAL team knives that were made is almost identical to the last knife, but you have all this development and money that’s spent on all these different knives in between, and the last one ends up to be almost exactly the same as the first one that’s 50 years before."

In the late 1990s, Zinke was the commander of a SEAL team deployed to capture a Bosnian police chief.

Stevan Todorovic was a "torturer, rapist, and mid-level thug who specialized in violating the rights of non-Serbian Bosnians," according to Zinke in "American Commander." His team was charged with ensuring that Todorovic "simply vanish without any trace until he showed up at The Hague for prosecution." One morning outside Todorovic’s apartment complex, the SEAL team threw him to the ground and packed him into the van.

Todorovic was later sentenced by the United Nations war crimes tribunal to 10 years in prison after he was convicted of crimes against humanity.

In Iraq, Zinke worked on a team charged with snatching the accountant of Muqtada al-Sadr, an Iraqi Shiite leader who called on his followers to target U.S. troops. Zinke was on an operations base to coordinate support when the SEAL team entered the accountant’s compound. "The accounted, selected members of his family and his books and computers were loaded into the waiting vehicles outside," Zinke wrote.

When Zinke was 2 years old, his family lived in a single-wide trailer in Bozeman, Mont.

"I once opened the door just a crack on an especially windy day," he wrote. "… [W]hen the wind caught the aluminum door and used it like a sail, I sailed right along with it — out the door and onto the sidewalk." He wound up in the hospital with a concussion "and a taste for flight," he said. (He went on to do 900 parachute jumps in the SEALs. McEwen said Zinke has a "certain deference to adrenaline.")

His family later moved to Whitefish, Mont., in a small home on a lake near the railroad tracks before his parents went through a "nasty divorce" when he was a kid, he wrote.

When Zinke was in college, he’d come home during summers to work for his father, a plumber. He pumped out septic systems, where he’d sometimes need to clear grinder pumps of debris like "a wedged pair of women’s panties or a towel." It was "a time where little concern was placed on contagious viruses or diseases, and the only precaution was a well-earned shower at the end of the day."

Other SEALs call him ‘Z Man.’

Zinke knew he was "one of the guys" when his fellow SEALs dubbed him "Z Man."

McEwen said in an interview, "If you say ‘Z,’ any SEAL — active or inactive — will know exactly who you’re talking about."

When he was in college, "aided by a bottle of cheap tequila," he had his friend carve Z’s into his hair on both sides, connected in the back with lightning bolts.

His last name, pronounced "zinc-ee," means "prominent nose" in German, according to his book.

He considers himself a Roosevelt conservationist.

"It was Roosevelt who had the courage to look into the future and use his powers under the Antiquities Act to preserve and protect public lands for the benefit of generations to come," he wrote.

Zinke quoted Roosevelt saying, "Conservation means development as much as it does protection," and the Montana congressman criticized "special interest groups" for blocking resource management and reducing public access to public lands. "Our elderly and disabled no longer are able to access lands, as paths and trails are only for those able to backpack in or ride on horseback."

He’s also an avid hunter. "He hunts big game, everything from big game to birds and fishes. He’s an avid fisherman as well," McEwen said. But Zinke’s not in it for trophies, McEwen added. "I would say he’s more like a subsistence-type hunter. I think he enjoys the hunting sport as well as any of the meat that’s taken."

Zinke has caught flak during his House campaign and since being picked to lead Interior for reports that he committed travel fraud during his SEAL days.

The website The Intercept reported in December that Zinke was caught traveling to Montana multiple times in the late 1990s to renovate his home, while claiming his travel was for official duties. The report cited three anonymous sources (Greenwire, Dec. 21, 2016).

Zinke wrote in his book that he had a "glitch" in his record as a SEAL. "Call it bad judgment or a bad habit; it was one [and] the same." He said he’d traveled to Montana to scope out training sites and then went on leave to work on restoring his grandparents’ house in Montana. Selecting training sites "was a privilege that had been afforded to every team leader before me," but the rules had changed and "autonomous travel was no longer authorized."

His travel claims were scrutinized, and he ended up having to repay $211 in unauthorized expenses, he said. "[T]he biggest penalty was being embarrassed for wrongdoing."

Beer has played a part in some of the bigger moments of Zinke’s life.

In grade school, he’d put a case of Olympia Beer on his grandfather’s tab at the local bar and make a profit selling it to high school kids. He’d repay the tab at the bar and made some important older friends, so he "never had to worry about getting a ride or getting beat up," he wrote.

Zinke got married when he was in Officer Candidate School. He and his first wife eloped one night after drinking "a beer or two more than we should have." They were married for five years. Zinke came home from a deployment in the Philippines to find all the furniture gone, including a teak and mahogany bar he’d had commissioned in the Philippines. "I remember my first thoughts were not about losing a wife. They were about losing the bar. God, I miss that bar. The marriage was over. I wished her the best."

He met his second and current wife, the former Lolita Hand, in a SEAL hangout bar called McP’s Irish Pub & Grill in California in 1990. She bought the first round of drinks. Zinke still remembers "the color of her skirt and her black cowboy boots."