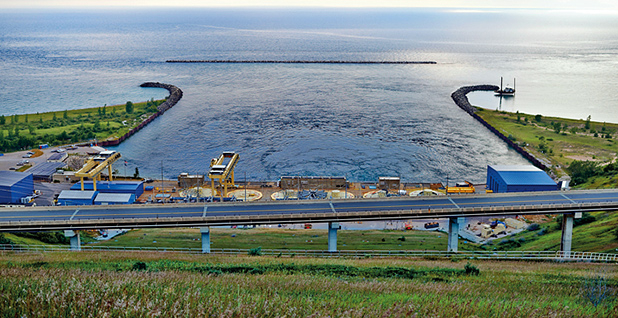 A new study concludes that long-range transmission could provide the cheapest way for the U.S. to reach 100% zero-carbon power, even with existing technologies like pumped hydropower. A pumped hydropower system in Lake Michigan is pictured. Consumers Energy

The United States could transition to 100% carbon-free electricity more cheaply if it focuses on existing technologies and a national build-out of transmission, rather than next-generation technologies like carbon capture and small nuclear plants, according to a new study.

Published in the journal Joule last week, the study finds that expanding transmission lines across states and regions, and implementing a national process for coordinating regional grids, could cut the cost of obtaining carbon-free power by 46% compared with a state-by-state decarbonization process.

Those regional grids could run entirely on technologies that have already been deployed in at least 1 gigawatt of scale, like onshore wind, solar, nuclear, hydropower, and energy storage strategies like short-duration batteries and pumped hydro, according to researchers at the Massachusetts Institute of Technology’s Energy Initiative.

Given the scale of that technical and political challenge, the federal government would need to guide the process, they said.

The large-scale expansion of transmission contemplated by the researchers would include new interstate and interregional connections spanning well beyond statewide or regionwide upgrades. Wind power from Texas, for example, could end up feeding into the Southeast, while the mid-Atlantic could soak up Florida solar and Maine hydropower.

It would also require a rethink of how the nation’s grids meet their demand. Regional grid operators would need to start coordinating build-out with their peers who handle electricity in places a thousand miles away, for example, and permits for long-distance lines would have to be secured from federal, state and local agencies.

"I would start by bringing [independent system operators] together, getting them to start planning for a more interconnected zero-carbon system," said Patrick Brown, a researcher in MIT’s Energy Initiative and the study’s lead author. "And on the permitting level, using existing federal authority to identify and expedite new interregional transmission corridors."

Transmission could turn renewables like onshore wind and solar into the country’s reigning forms of power generation without sacrificing the grid’s reliability — and without long-duration batteries, small modular nuclear reactors, carbon capture or even offshore wind, he added.

"Maybe you have to double the transmission capacity in the U.S. system," he said. "But to me, that seems less scary than saying we have to invent new technologies and scale them up [tenfold to a hundredfold] in the next 15 years."

The study arrives as the energy sector braces for a new administration with unprecedented ambitions for clean energy. President-elect Joe Biden has called for a 100% zero-carbon goal in the electricity sector for 2035.

The study splits from other analyses and experts who say that newer, less widely used technologies would be critical to achieve that target. Several of the country’s largest utilities, for example, have set a goal of cutting or offsetting all of their CO2 emissions, and they say it will hinge on the adoption of new low-carbon technologies. Others have noted the political challenges in a mass transmission build-out, such as permitting and moving infrastructure legislation through Congress.

The Joule study suggests the nation would be better off taking a different route: Instead of waiting for emerging technologies, utilities could focus on converting their generation capacity to renewables and short-duration storage that’s already available.

The cost of that approach, if carried out nationally, would be lower than a state-by-state transition even if all the country’s existing nuclear plants were closed, said Brown.

"If you’re looking at an isolated area — a single state or [independent system operator] — then having nuclear or long-duration storage has a much bigger impact on electricity costs," he said. "But looking across the U.S., the impact is smaller."

Adam Benshoff, executive director for regulatory affairs at the Edison Electric Institute, did not comment directly on how the study’s conclusions conflicted with many utilities’ stated reliance on emerging technologies. EEI is the country’s main trade group for investor-owned utilities.

Benshoff wrote in an email to E&E News, however, that "no current technology has the potential to play as pivotal a role in accelerating [the clean energy] transition as electric transmission." Getting permits from federal, state and local authorities, he added, was "one of the largest barriers to transmission development."

Spokespeople from the Nuclear Energy Institute said they had not reviewed the study, while pointing to an International Energy Agency study finding that, globally, nuclear could be the lowest-cost source of dispatchable low-carbon power in 2025. A second study cited by NEI also found that using small modular nuclear reactors to decarbonize in the states of Washington and Oregon could save $8 billion per year compared with relying on renewables.

Tracy Warren, who directs the American Council on Renewable Energy’s Macro Grid Initiative, said the study was part of "a growing body of research" that supported the wisdom of large-scale build-out.

"It’s high time for our political leaders to embrace" the idea, she added.