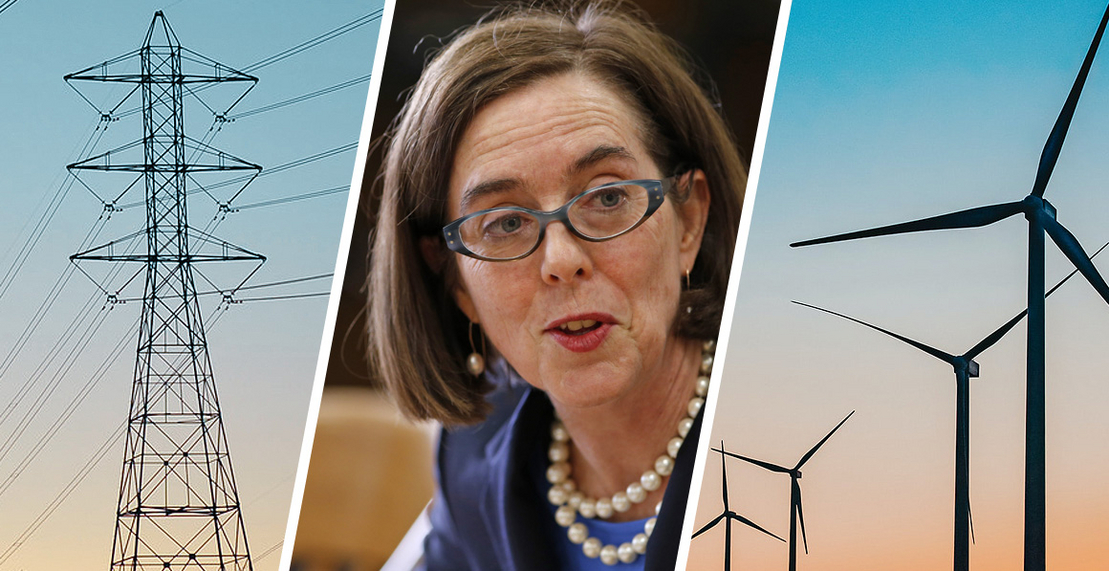 Oregon Gov. Kate Brown (D) signed one of the nation’s most aggressive clean energy plans into law this week, setting up a stress test for how rapidly utilities can switch to 100 percent carbon-free resources without compromising reliability.

With support from companies, labor groups and environmentalists, the plan requires the state’s largest utilities to reduce greenhouse gas emissions 80 percent below a baseline level by 2030, 90 percent below the same level by 2035 and 100 percent by 2040. The timeline is similar to one from President Biden calling for decarbonizing the nation’s electricity sector by 2035.

For the state’s two investor-owned utilities, Portland General Electric (PGE) and Pacific Power, the baseline will be equal to the average annual emissions from the electricity sector in 2010, 2011 and 2012.

Oregon’s new policy sets a more ambitious timeline than those of most of the dozen or so states that are working to achieve carbon-free electric grids. California and Washington, for example, have each passed laws requiring 100 percent carbon-free power by 2045.

“Oregon is certainly leading the way, and if other states follow the lead, 2021 can be a year of climate action for this country,” Brown said at a ceremony celebrating the law’s enactment this week.

But whether Oregon’s utilities can achieve the emissions reductions mandated by the new law is an open question. It’s also a question that holds relevance nationally. While Oregon’s electricity mix is different than many other states, the hurdles it faces in enacting the plan are widespread — a lack of adequate transmission, a need for low-carbon technology that doesn’t exist yet and a warming climate that is stressing the grid.

While Pacific Power sees “a path towards meeting the emissions reduction trajectory,” it doesn’t have a clear plan for reducing its emissions beyond the 2030 target, said Tom Gauntt, media spokesperson for the utility. However, Pacific Power is “already transitioning” to include more non-emitting resources, Gaunt added.

“By optimizing our resource portfolio, taking advantage of efficient market operations, and expanding transmission to ensure access to low-cost renewables across the west, we see a path towards meeting the emissions reduction trajectory in HB 2021,” he said in an email.

Oregon currently gets approximately 37 percent of its utility-scale electricity from hydropower, while 4.8 percent comes from wind, according to the Oregon Department of Energy. Gas and coal also fire about half the state’s power.

To meet the new law’s requirements, Pacific Power and PGE will need to boost their transmission resources, particularly to reach the 2040 mandate, said Randy Hardy, principal at Hardy Energy Consulting and a former administrator at the Bonneville Power Administration. Most of the accessible renewable resources in place or under development are in the less-populated eastern part of the state or in states east of Oregon, Hardy said.

“To get the renewables, and for that matter, the other resources, to your load centers in Portland, Salem and other points on the West side, you’re going to need to have significant additional transmission,” Hardy said. One challenge is that transmission can be difficult to site and plan — and get constructed quickly enough to bring low-carbon power online under a deadline.

Oregon’s law also precludes the state from siting any new fossil fuel-based generating facilities or approving “a site certificate for an energy facility” in a way that could “significantly increase the gross carbon dioxide emissions” from such a facility. That could pose additional challenges for implementing the new law’s mandates, partly because of limitations with current low-carbon technology, according to Hardy.

While the utilities are planning to add more renewable energy resources, their options for generating long-duration energy storage will be limited to pumped hydropower, batteries and technologies “that [don’t] exist technologically right now,” said Angus Duncan, a consultant for the Natural Resources Defense Council in the Pacific Northwest.

Although there are multiple proposed pumped storage projects in the Pacific Northwest, alternative technologies such as compressed-air energy storage may need to be explored, as well, Duncan said. The technology, which has not been used widely in the United States, functions similarly to pumped-hydro power plants, but instead uses air or gas that is stored under pressure underground, according to the Energy Storage Association.

“The real technological assumption we’ve made with this [law] is that between now and 2040, we’ll have long-duration storage capability,” Duncan said.

Similarly, carbon capture and storage could be an option for gas generators, but the technology is not currently operating at scale on U.S. power plants and has faced cost obstacles in the electricity sector in the past.

Despite the questions remaining for Oregon as it works toward its new law, environmentalists are encouraged by its passage and say they are hopeful that the state can show the rest of the country that emissions from the power sector — the second-largest source of greenhouse gases nationwide — could be brought down to zero.

Backers also say the legislation’s success is a sign that mandates targeting the power sector developed with input from utility companies, environmental justice groups and organized labor can achieve support from a diverse set of interest groups.

In 2019 and 2020, Republicans in the Oregon Legislative Assembly fled the state Capitol to deny the Oregon Senate the quorum it needed to pass cap-and-trade legislation. As a result, the legislation failed both years (Climatewire, Jan. 15, 2020).

But this year, climate and environmental justice activists who championed the new law prioritized the inclusion of rural communities, communities of color and others to overcome the political polarization Oregon has previously seen on climate issues, said Nikita Daryanani, climate and energy policy manager at the Coalition of Communities of Color in Oregon. While few Republicans supported the legislation, there was little to no organized opposition to the measure, backers said.

In addition to setting new labor standards for contractors that construct large-scale renewable energy projects, the final law permits the Oregon Public Utility Commission to approve limited exemptions for meeting the emissions reduction targets if the rate impacts are higher than a designated amount.

Similarly, the PUC could grant temporary exemptions to the law’s requirements if it determined that forcing a utility to meet the requirements could jeopardize its ability to comply with reliability standards set by the North American Electric Reliability Corp., according to the law.

Those provisions will minimize potential harms that could result from the state’s energy transition, particularly for environmental justice communities, Daryanani said.

“This policy is good policy because it allows for pauses, so that if energy demand is going up, we’re able to address that [reliability] and have adequate resources and accountability to make sure we’re getting back on track,” Daryanani said.

Utilities, independent power producers and the Oregon Citizens’ Utility Board, which advocates for residential customers of the two investor-owned utilities, were also actively involved in discussions leading up to the final law, said state Rep. Pam Marsh (D), one of the primary sponsors of the measure.

“It was, in many cases, partners who had never sat down together,” Marsh said.

Both of Oregon’s investor-owned utilities are planning new renewable energy resources that will bring them closer to the 2030 target. PGE’s planned Wheatridge energy facility, for example, will add 380 megawatts of power to the state from solar, batteries and wind in a first-of-its-kind facility. PGE did not provide comment by press time.

Historically, the region has also taken advantage of energy efficiency, which is now considered one of the state’s largest low-carbon resources along with hydropower.

Nonetheless, those ample hydropower resources could also face strain in the face of the Western drought and climate change.

The past month could be a preview of what is more likely in a warming world: A heat dome that swept through Oregon and Washington likely killed hundreds of people, as temperatures climbed into the 100s and 110s Fahrenheit. Oregon has also been battling intense wildfires since the spring, including the Bootleg Fire, which spanned more than 413,000 acres across southern Oregon as of yesterday, according to the Oregon Department of Forestry.

In addition, some utilities elsewhere in the Pacific Northwest instituted rolling blackouts in June during the heat dome event, and experts say similar events could occur more frequently in coming decades.

“Whether climate change or other factors like fish constraints change or reduce [our] hydro resources, or we experience severe drought, is a major question, as well,” Hardy said.

Marsh, who said her district lost about 2,500 housing units due to wildfires last summer, acknowledged that it will be a “stretch” for the utilities to reach the 2040 goal, particularly without support from the federal government and in light of the changing climate. But to her, the heat waves, wildfires and drought that have tested the state’s grid are also a clear indication that Oregon needs to transition away from fossil fuels — with or without comparable federal mandates, she said.

“As the experience on the landscape is indicating, we’re way behind already,” Marsh said. “Without federal action, then it’s really up to the states to take broad action and work together to develop parallel policies that are going to be distinct for every state.”

Ester Wells contributed to this report.