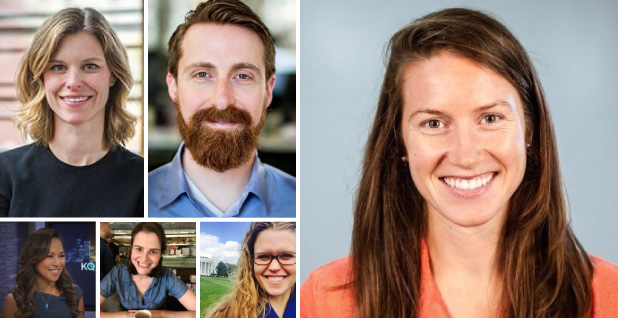 Burgess is the head of the climate team for Steyer’s campaign. He worked for six years at NextGen America, Steyer’s main political venture before he ran for president, most recently leading the climate and energy operations.

Mitchell, another senior adviser, was Steyer’s first major endorsement of his 2020 race. Mitchell was a Democratic state lawmaker in South Carolina, an early primary state, and founded ReGenesis, a community development corporation in Spartanburg, S.C.

Truong is the lead adviser for Steyer’s climate justice policies. She has done justice- and environment-related work for numerous organizations, companies and others, and previously led the groups Green for All and Dream Corps.

Weiskopf is another NextGen alum, having come from the organization’s California office, where he did climate and energy work. He previously worked in the Chicago-based Midwest office of the Natural Resources Defense Council.

Gershuny was a senior aide in the Energy Department’s policy office under President Obama and also held roles in the White House personnel office and the Office of Science and Technology Policy.

Feldman is the policy director for Biden’s campaign, overseeing development of all of the candidate’s policy statements, including his extensive climate change plan.

Feldman has worked for Biden in policy roles since 2011, first in the White House and then at the University of Delaware’s Biden Institute, before joining his presidential campaign.

Thomas comes from Sanders’ Senate office, where she is an energy and environment adviser, including for his work on the Energy and Natural Resources and Environment and Public Works committees.

Before joining Bloomberg’s campaign upon its launch in November, she was for six years the head of environmental matters at Bloomberg Philanthropies, the organization the media executive uses to oversee the charitable efforts he funds.