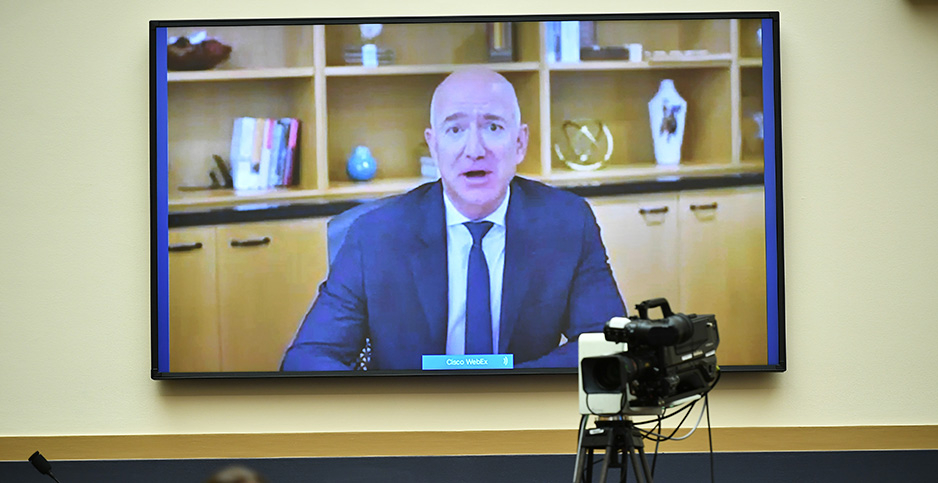 Amazon.com Inc. CEO Jeff Bezos testifies before Congress in July. The company's army of lobbyists is not focused on the environment. CNP/AdMedia/Newscom

Amazon.com Inc., the sprawling technology conglomerate that produces more planet-warming carbon dioxide annually than some Western European nations, has made its emission-cutting ambitions central to the company’s public image.

Amazon has vowed to offset more carbon than it emits within 20 years, urged other companies to follow suit and named a sports stadium after its so-called Climate Pledge. Those promises have all come during the era of President Trump, when federal action on climate change has come to a near-standstill.

Amazon has spent over $57.9 million since 2017 on influencing federal officials — the second-most of any company in the Trump era — and currently pays 115 lobbyists, according to an E&E News analysis of lobbying data. During that time, just one Amazon lobbyist — a former Senate Republican staffer — has lobbied on the environment.

"They’re not walking the talk," Robert Brulle, a professor of environment and society at Brown University, said of Amazon. "What they’re doing, a lot of people would call it green washing."

Amazon is not the only tech giant that claims to be concerned about climate change in public but has been largely silent on the issue in meetings with federal officials. Facebook Inc., one of the top 10 corporate lobbying spenders since Trump took office, only began talking to members of Congress about climate change in the last few months, lobbying disclosures show.

The other big technology companies — Microsoft Corp.; Apple Inc.; and Google, whose parent company is the top lobbying spender since 2017 — have made climate-related issues a regular feature of their federal advocacy efforts, E&E News has found.

"Lobbying itself is neither good nor bad," said Lisa Gilbert, a lobbyist for Public Citizen, a nonprofit consumer advocacy group. "It’s simply interacting with elected officials and regulators to push for things."

But corporate decisions about lobbying can reveal their priorities.

As the market capitalizations and interests of Amazon and Facebook have grown in recent years, so have their lobbying efforts. Both have invested heavily to shape federal policies on privacy, antitrust and data security, according to lobbying disclosures compiled by the Center for Responsive Politics, a group that tracks money in politics.

That makes sense, experts said, given the increased scrutiny of the tech industry by lawmakers and the Trump administration.

Jeff Bezos, Amazon’s founder and CEO, has been subjected to recent congressional oversight, as well.

Amazon only began contacting EPA officials on "issues related to sustainability" at the end of last year, disclosures show.

Amazon declined to respond to questions about the sustainability issues it is lobbying on and why it chose Hawks to advocate for them.

But an Amazon spokesperson said the company "has actively advocated for policies that promote clean energy and address climate change." They include efforts to support the Paris Agreement, European climate efforts, a U.S. bill to promote renewable energy and state plans to expand renewable energy.

Yet the company has come under fire from its own shareholders for actions that could undercut its limited climate advocacy. A resolution considered at Amazon’s annual meeting this year called on the company to be more transparent about its lobbying efforts — both individually and as a member of powerful trade associations like the U.S. Chamber of Commerce, which has opposed the Paris accord and other efforts to address climate change.

The resolution, which garnered the support of nearly 30% of shareholders, said that "contradictions between Amazon’s policy and its lobbying efforts can create reputational damage, negatively impact our ability to attract and retain talent, and harm long-term value."

Amazon’s campaign contributions — another measure of corporate priorities — have also raised questions about its climate commitments. At the Senate level, the company has overwhelmingly supported Republicans, who have collectively opposed legislation to curb carbon emissions.

For example, Bezos announced the Climate Pledge in September 2019, the same month that Amazon’s political action committee gave a combined $20,500 to political organizations supporting six Republicans whose races were widely expected to determine control of the Senate. All but Sen. David Perdue (R-Ga.), who is facing a runoff election early next year, were reelected (Climatewire, Oct. 14).

During the Trump administration, Facebook CEO Zuckerberg has generally sought to avoid weighing in on issues of political debate. Climate change has been an exception.

In a May 2017 commencement address at Harvard University, he called climate change one of "our greatest challenges."

Trump’s vow to withdraw from the Paris Agreement "is bad for the environment, bad for the economy, and it puts our children’s future at risk," Zuckerberg said in a brief Facebook post the following month. "We have to act together before it’s too late."

But over the next three years, Facebook’s well-funded lobbying operation had little to say about the problem. The company for the first time lobbied members of Congress on "issues related to climate change" sometime between this July and the end of September, filings show.

It’s unclear which specific climate issues Facebook has lobbied on. The company initially disclosed contacting lawmakers about S. 2298, a bipartisan bill that seeks to roll back a program that requires gasoline to be blended with corn-based ethanol.

But after being contacted by E&E News, Facebook updated its third-quarter lobbying disclosure to remove a reference to that legislation, which would benefit the oil industry.

Since 2012, Facebook’s public policy efforts have been led by Greg Maurer, who previously served as a senior aide to former House Speaker John Boehner (R-Ohio). During the Trump administration, the company has spent over $55.8 million shaping U.S. policy and is a member of the U.S. Chamber.

"We’re committed to fighting climate change and are taking substantive steps without waiting for any legislative action," a Facebook spokesperson said, noting that the company will run entirely on renewable energy by the end of the year. "We’re implementing the Paris Climate Agreement emissions targets across our operations, helped found the Renewable Energy Buyers Alliance to increase access to renewable energy and are minimizing our own environmental impact, while working with partners on solutions for a more sustainable world."

But the lobbying disclosures of Amazon and Facebook suggest that climate change — despite what Bezos and Zuckerberg have said about the problem — isn’t a high priority for the companies.

The filings show "they have not yet committed Washington dollars to trying to make something happen" that would slow global warming, said Gilbert of Public Citizen.

"Perhaps they don’t think in the Trump era that anything will happen, so it’s not even worthy of spending big bucks," Gilbert said. But given the companies’ public statements on the importance of combating climate change, "you would think it would be reflected in how they’re choosing to spend money to influence elected officials," she added.

Other tech titans lobby for the climate

The lobbying of other tech titans appears to more closely align with their stated climate concerns, the E&E News analysis has found.

Lobbyists for Alphabet Inc., the parent company of Google, disclosed contacting members of Congress in 2017 and 2018 regarding "innovation in renewable energy production," filings show.

Google became the first major company to offset more carbon that it emitted in 2007. The company has also been working to match all of its energy use in real time with renewable power — a technically challenging endeavor when connected to a grid that also carries fossil fuel-based energy.

Alphabet has spent nearly $59.4 million on federal lobbying since 2017, more than any other company during the Trump administration. Much of Alphabet’s recent lobbying has been focused on competition policy, filings show. Despite those efforts, the Justice Department sued Google last month for allegedly violating antitrust laws.

Apple, with a market capitalization approaching $2 trillion, is the world’s most valuable publicly traded company. But the device maker has spent around $26.4 million on federal lobbying in the past four years, far less than its tech sector rivals.

Microsoft was slower than Apple and Google to make major public climate commitments, only announcing in January its plan to go carbon neutral in a decade’s time.

But the software company has been quietly and consistently lobbying federal officials on a wide variety of climate, clean energy and environmental issues since 2017. Microsoft has spent nearly $35.8 million on lobbying over that time.

Founded in 1975, Microsoft is the oldest of the big tech firms. Wall Street analysts think the company is now well positioned to profit from its decarbonization efforts (Climatewire, June 1).

Earlier in its history, Microsoft avoided K Street, according to Dan Auble, a senior researcher at the Center for Responsive Politics.

"Back in the ’90s, when they became a major corporation, they kind of had a hands-off approach to Washington and didn’t want to get involved in that whole scene," he said. "And it came back to bite them because, when they faced antitrust issues and other regulatory issues, they were a little bit caught flat-footed."

In 2000, a federal judge ruled that Microsoft had monopolized the personal computer market and ordered a breakup of the company — a fate the tech giant narrowly avoided on appeal.

Part of the reason newer companies like Facebook have ramped up their lobbying efforts so rapidly in the past decade is that they "learned a lesson about the ability to exist separate from Washington," Auble said.

Experts think Amazon and Facebook are likely to join an expected surge in corporate climate lobbying under President-elect Joe Biden, who has said addressing the problem is one of his top policy priorities. That could become more pronounced if Democrats manage to gain control of the Senate by winning two Georgia runoff elections in January (Climatewire, Nov. 5).

"These companies are savvy, and they will be able to quickly assess that there’s a new game in town and new issues are being prioritized — and climate will be one of them," said Public Citizen’s Gilbert. "So I would anticipate that they will be spending more dollars on weighing in on this topic as well as hopefully moving progressive priorities."

But Brulle, the Brown professor who has published research on corporate lobbying, expects Amazon and Facebook to take a more nuanced approach to their climate advocacy with a Biden administration on the horizon.

After years of avoiding the issue, their lobbying teams may now choose to play both sides of the climate policy debate, he predicted. They could continue giving to trade associations opposed to aggressive climate action while arguing for specific compliance exemptions or tax benefits in any climate-related rules or legislation that is likely to be enacted.

"They’re very strategic about what they want. They’re not going to necessarily lobby for climate action or against climate action," he said. "They try to work the minutiae."