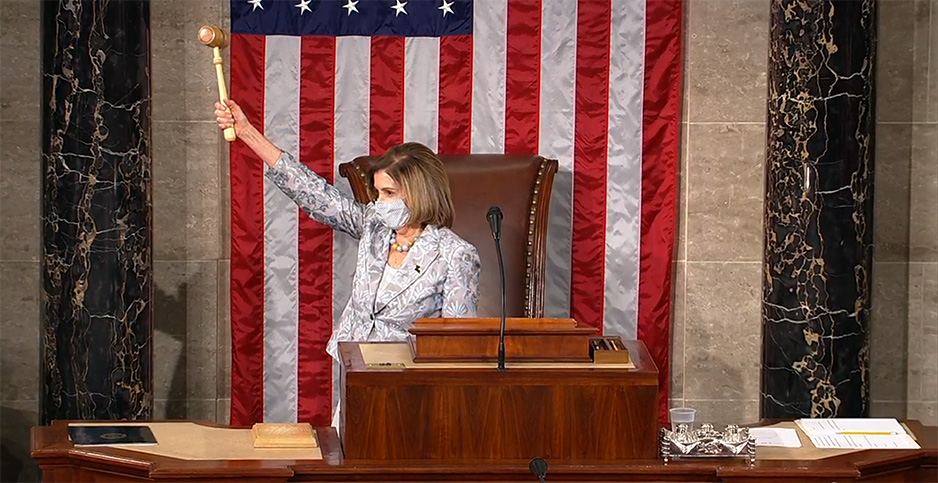 The 117th Congress opened to an uncertain political landscape yesterday, with a tight vote for the House speakership and with Senate control still up in the air.

Lawmakers face fresh fights on energy and environmental issues, particularly climate change, but first they have to get through the political and logistical hurdles of the next few weeks.

With the Georgia runoffs tomorrow set to determine which party holds the Senate, the chamber may not be able to organize committees or begin work on President-elect Joe Biden’s executive branch nominees (see related story).

Plus, Republicans in both the House and Senate plan to object to the formal Electoral College results to certify Biden’s victory on Wednesday, amid President Trump’s baseless claims of election fraud.

While it will not affect the result of the presidential election, the objection will force debate that House leadership has said could drag out into the evening (see related story).

House Speaker Nancy Pelosi (D-Calif.) was reelected to her post in a 216-209 vote yesterday, rallying support from more conservative Democrats and progressives alike who in the past have supported challengers or avoided voting for her.

The speaker got the backing of Rep. Alexandria Ocasio-Cortez (D-N.Y.) and new progressives like Cori Bush of Missouri and Jamaal Bowman of New York.

Pelosi said, "Scripture tells us that to everything there is a season — a time for every purpose under the heavens; a time to build, a time to sow, a time to heal. Now is a time for our nation to heal."

The Senate, after some housekeeping matters and swearing in new members, gaveled out until the Wednesday fight over Biden’s win.

The new Congress will have a relatively clean slate after lawmakers passed a long-awaited energy innovation bill and a federal phase-down of climate-polluting hydrofluorocarbons as part of the year-end spending and stimulus package last month (E&E Daily, Dec. 22, 2020).

Here are a few of the energy and environmental battles that will play out in the coming weeks and months:

House lawmakers will vote on a rules package in the coming days that would allow an easier path for climate change legislation, a win for the Congressional Progressive Caucus, which had pushed to do away with restrictive budget rules.

The package, proposed by Pelosi and Rules Chairman Jim McGovern (D-Mass.), would waive "pay as you go," or PAYGO, mandates for COVID-19 response and for legislation "to prevent, prepare for, or respond to economic, environmental, or public health consequences resulting from climate change."

The PAYGO guidelines, which require that new spending be offset, have long been a sore spot for progressives, who say they effectively halt proposals like "Medicare for All" and the Green New Deal.

The new rules would mean that the House could pass a pricey climate or COVID-19 relief bill, likely to be a major vehicle for other priorities early in the year, without budgetary constraints.

"Our most urgent priority will continue to be defeating the coronavirus. And defeat it we will," Pelosi said during her remarks. "Two weeks ago, we passed an emergency relief package to crush the virus and put money in the pockets of workers and families, which is now the law. But we must do more to recognize our heroes."

McGovern said Democrats "want to remove any constraints that would essentially be a disincentive for doing something big."

"It is our view that if we don’t deal with the climate crisis, that is also going to cost us enormously in the future," McGovern said on C-SPAN yesterday.

While Castor’s committee would not get any significant new powers, the rules proposal would allow standing committees to transfer certain subpoenaed records to the climate panel.

The Senate will be busy in the next few weeks working through Biden’s nominees, a process ripe for partisan bickering that’s likely to determine much about the new administration’s agenda on the environment and climate.

Typically, committees begin hearings before the new president is even sworn in on Jan. 20 so that key officials can be confirmed on Inauguration Day.

But this year, that timeline is less clear because of the Georgia runoffs and because many Republicans for weeks refused to acknowledge that Biden had won the election.

And in the event Democrats win both Georgia Senate seats, Republicans would still officially control the chamber until at least Jan. 20, with the vice president representing the tiebreaker in a 50-50 split.

Senate Majority Leader Mitch McConnell (R-Ky.) last month said all of Biden’s picks would get a vote on the floor should Republicans remain in control of the chamber.

Biden’s nominees have already held dozens of meetings with lawmakers from both parties, including a virtual gathering Minority Leader Chuck Schumer (D-N.Y.) convened with his environment and climate picks last week (Greenwire, Dec. 28, 2020).

"We certainly understand this year is different for a range of reasons, but we are eager and hopeful that we will be able to work with members from both sides and their teams to get our nominees confirmed," Biden spokeswoman Jen Psaki told reporters last month.

Some of Biden’s nominees are already facing some early resistance from the GOP, though Republican offices have mostly stayed silent on his energy and environmental picks.

Neera Tanden, the president-elect’s choice to lead the Office of Management and Budget, has seen early resistance for her past tweets about Republican lawmakers.

Sen. John Barrasso of Wyoming, who will be the top Republican on the Energy and Natural Resources Committee, said last month on "Fox News Sunday" that "the Biden Cabinet would be the third term of the Obama administration" (E&E Daily, Dec. 21, 2020). Biden’s nominees, Barrasso added, will "have to run the gantlet."

The Trump administration still wants to get some of its nominees through. Yesterday, it sent the Senate picks who failed to get confirmed during the 116th Congress.

Among them are Charles Cook for the Tennessee Valley Authority board; Brian Brooks to head the Office of the Comptroller of the Currency, and several judicial picks, including for the U.S. Court of Federal Claims.

The Senate, however, is not scheduled to be in session much until Inauguration Day. Those plans are subject to change.

Both parties, as ever, will be looking for moving legislative vehicles to pass their agendas, and infrastructure and COVID-19 relief will likely offer the earliest opportunities.

Much depends on what happens in Georgia, but climate policies, in particular, will be looking for a ride.

McConnell is sure to block any major climate-focused bill if Republicans keep the Senate. A major climate bill would be difficult even with a narrow Democratic majority in the upper chamber.

But Congress kicked the deadline to reauthorize surface transportation programs until this year, and Biden is pushing for infrastructure to be a major piece of his job and stimulus plan.

Castor said last month that she expects the "Moving Forward Act" to be a springboard to addressing climate change with grid modernization and clean energy measures in the 117th Congress.

"I think that will be the template that we work on," Castor said during a December event with the U.S. Green Building Council.

Trump and his team came in with the goal of dismantling the administrative state. Biden will soon try to put it back together. At the least, he’ll push to reverse much of Trump’s agenda.

Should they win the Senate, Democrats could try to ax several recently finalized regulations using the Congressional Review Act.

The law allows Congress and the president to quickly kill regulations finalized within the last 60 congressional days.

Likely targets include the EPA science transparency rule, which is expected to be issued this week, and cost-benefit analyses on air regulations, which EPA finalized last month.

Both have caught the ire of Democrats on Capitol Hill, who have said all options are on the table to quickly reverse Trump’s actions.

It’s less likely, however, that Democrats would try to repeal such foundational actions, because the CRA says agencies can’t reissue rules similar to those Congress has scrapped, and the courts have not yet outlined how they would enforce that mandate.

Still, using the CRA to kill rules is much faster than going through the rulemaking process, which often takes years. In 2017, Republican lawmakers and Trump repealed 16 Obama-era regulations.

Some advocacy groups are opposed to using the CRA at all, arguing that it’s bad governance and sets a bad precedent. But progressives pushing Biden to move quickly and aggressively on climate are in favor.

The 117th Congress will once again face pressure to revise and extend an assortment of energy tax incentives, despite last month’s modest deal.

However, lawmakers rebuffed multiple pleas from an assortment of energy sectors for including the option of direct payments in lieu of tax breaks.

Such a move would help companies weather the frozen tax equity markets. Fallout from the COVID-19 pandemic has made it difficult to capitalize on the incentives.

"The tax equity markets really have constricted," said Solar Energy Industries Association (SEIA) CEO Abigail Ross Hopper. "We have heard that from our companies, and we have certainly seen that in the marketplace, and that’s why the direct pay makes sense."

Another top priority for SEIA and other clean energy interests is a new energy storage incentive, which was under discussion in talks last month and at the end of 2018, only to drop off the negotiating table.

"I think there was some reticence about bringing in new tax credits as opposed to simply extending existing tax credits," Hopper said.

"I’m hopeful that if a new Congress thinks a bit more broadly about either an infrastructure package or an economic recovery package, that there will be appetite for new tax credits like the stand-alone energy storage credit," she added. "We’ll certainly be lobbying hard for that."

Another incentive that will see increased scrutiny is the electric vehicle tax break. Democrats and some GOP lawmakers have called for increasing the current per-manufacturer cap to encourage the electrification of the transportation sector, an expected top priority of the Biden administration.

However, the push to expand the incentive faces strong headwinds from many Republicans and small-government interest groups (E&E Daily, Jan. 28, 2020).