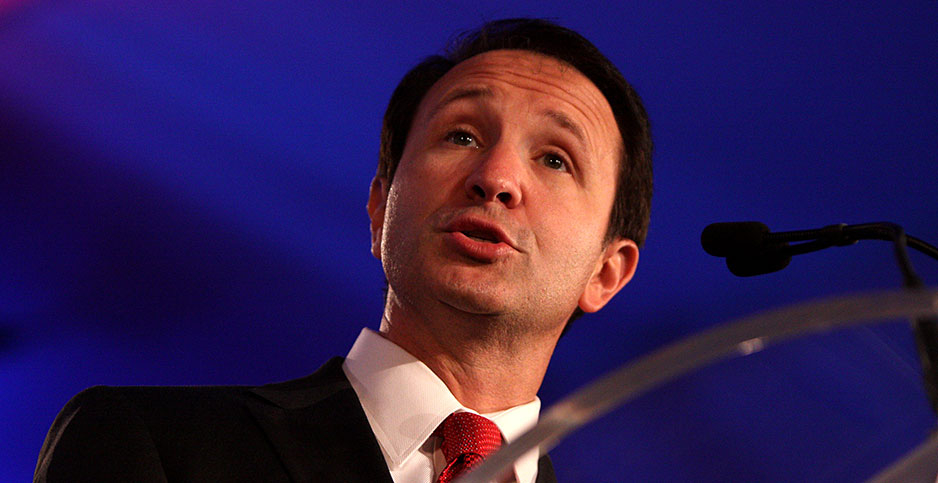 Louisiana Attorney General Jeff Landry (R) is leading a lawsuit from 13 Republican-leaning states challenging the Biden administration's pause on new oil and gas drilling leases on federal lands. Landry is pictured here at a New Orleans conference in 2011, when he was a Republican member of Congress. Gage Skidmore/Flickr

More than a dozen Republican-led states filed lawsuits against the Biden administration yesterday over its moratorium on new oil and gas leasing on federal lands and waters.

Louisiana Attorney General Jeff Landry (R) announced he was heading a 13-state challenge against the Interior Department, arguing the administration was "unraveling a long-standing statutory scheme" and was threatening middle-class jobs in the fossil fuel industry.

Wyoming has also separately filed its own challenge against the administration in a different federal court.

"By executive fiat, President Biden has not only conceded American leadership to foreign countries, but he has also doomed American jobs," Landry said in a livestreamed press conference yesterday.

Landry warned that a disruption in offshore oil and gas leasing would lead to lost royalty revenues for states’ coast restoration programs.

"Every dollar of royalty left on the table means another day we go without the crucial funds necessary to protect Louisiana’s coast," Landry said.

"Oil and gas jobs aren’t going anywhere," Psaki said. "The outgoing administration flooded the oil markets with cheap federal leases. This will not affect oil and gas production or jobs for years to come."

She added that Biden had committed to investing in job creation and ensuring the U.S. leads the "clean energy revolution" with "good-paying union jobs."

She said there was "misinformation" about the leasing ban, adding, "There are oil and gas jobs that are out there. The existing leases will continue. He’s really talking about future leases."

Tribal allotments are also excluded from the order.

Cynthia Sarthou, campaign director at Healthy Gulf, rebutted Landry’s claims that the pause in leasing would hurt revenues for coastal restoration. She noted there were enough existing leases to support oil and gas development in the western and central Gulf of Mexico for decades.

"In fact, there has been very little interest by the oil and gas industry in the last several lease sales held by [the Bureau of Ocean Energy Management] and leases that have been purchased have garnered fire sale prices," she said in an email.

In the Louisiana-led lawsuit, the attorneys general argue that the Biden administration violated statutory requirements under the Outer Continental Shelf Lands Act (OCSLA) and the Mineral Leasing Act (MLA) to develop energy resources on public lands and on the outer continental shelf.

"In compliance with those statutes, the Department of the Interior has for decades issued leases for the development of oil and natural gas on public lands and offshore waters," the attorneys general wrote in their complaint to the U.S. District Court for the Western District of Louisiana.

They argued that billions of dollars of revenue from those leases went back to the states for environmental reclamation projects.

The attorneys general urged the federal court to block and toss out all actions that relied on the executive order, "and the agencies ordered to return to the vital work of carrying out their statutory, regulatory, and contractual obligations under the OCSLA’s and MLA’s oil and gas leasing programs."

In their own lawsuit, Wyoming officials argued that in addition to blocking new leases, newly appointed Interior Secretary Deb Haaland had instituted a "de facto moratorium on all federal oil and gas lease sales."

The lawsuit points to a series of postponed and canceled individual lease sales in Wyoming and other states as evidence. The lawsuit seeks to prevent the Interior Department from pausing lease sales and compel Haaland to hold quarterly lease sales, including Wyoming’s first-quarter lease sale this year.

"Regardless of the clever scheme employed to shroud the Secretary’s action from both public view and judicial review, this de facto moratorium in furtherance of the Executive Order is final agency action that has already caused and will continue to cause significant and irreparable harm to Wyoming," Attorney General Bridget Hill (R) said in the complaint to the U.S. District Court for the District of Wyoming.

Hill alleged that the Biden administration had also failed to conduct an analysis under the National Environmental Policy Act to assess the environmental and economic impacts of halting leasing.

"Had the Secretary followed the law, the public could have had an informed debate about whether it makes good sense and a bit of difference to move production from public lands where the strictest environmental regulations apply, to private lands and foreign countries where the same rules do not apply," she wrote.

"But the Secretary ignored the law and in so doing cut the people of this country and the several sovereign states out of the process," she concluded.