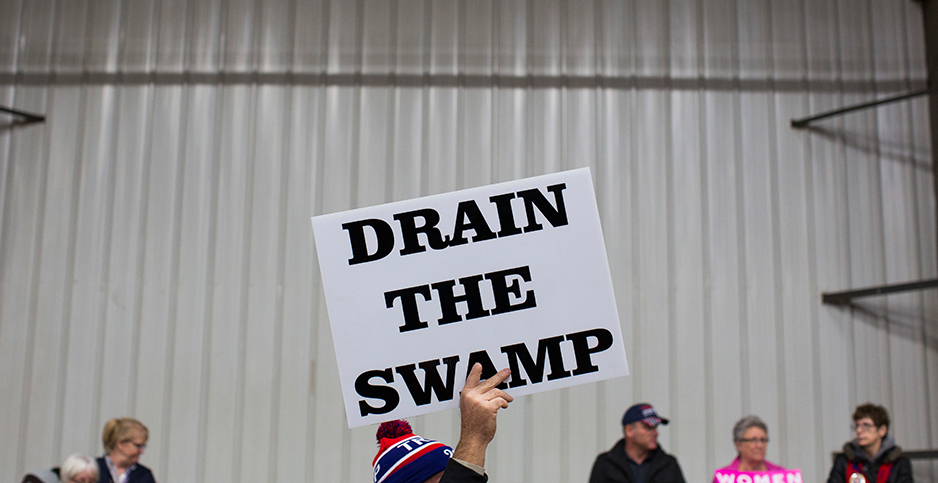 President Trump campaigned on a promise to drain Washington of lobbyists’ influence in government. But once in office, Trump issued an executive order that made it easier for lobbyists like Lyons to join the administration. Lyons, now associate administrator of EPA’s Office of Congressional and Intergovernmental Relations, is one of 15 former registered energy lobbyists at EPA, the Interior Department and the Department of Energy identified by E&E News in a review of Senate lobbying records.

The new hires have helped Trump implement a sweeping deregulatory agenda. In the president’s first 11 months in office, EPA has dispatched proposed carbon caps on power plants and regulations meant to limit runoff from coal mines. The agency also stalled methane limits on new oil and gas wells opposed by companies like Hess.

The influx of lobbyists has been welcomed by administration supporters and industry representatives, who say the new staffers are experienced hands who can help rebalance American energy policy after eight years under President Obama. Democrats, environmentalists and some ethics experts, by contrast, have sounded the alarm over the hires, arguing that the newly minted officials could be working to fulfill the goals of their former clients.

"All of these people will need to be judged on the decisions they make. Certainly they will be aware of the way these companies have been impacted by federal regulations and other federal programs," said Jeff Holmstead, an industry attorney at Bracewell LLP and a former EPA official during the George W. Bush administration. "I think that’s a good thing."

Others are less sanguine. It’s reasonable to appoint industry officials or lawyers to public positions because their business acumen or legal expertise might benefit the government, said Richard Painter, the top ethics official in the second Bush administration. Lobbyists, he argued, are another matter.

"Their area of expertise is persuading the government of what their client wants done," Painter said. "That’s a mentality that’s hard to get out of. You’ve been selling a certain policy agenda for a long period of time. How do you go back to the folks in industry and say, ‘I was shoveling bullshit for all those years; now I’m at the agency and have to look out for the public’?"

Lobbyists today have an easier path to joining the government than under Obama, ethics experts said. Under Obama, lobbyists were subject to a two-year cooling-off period, meaning they were not allowed to join an agency they had recently sought to influence.

Trump tweaked that policy when he came into office. He adopted much of his predecessor’s lobbying rules and even added some restrictions, like a five-year ban from lobbying after an official leaves public office. But he removed a restriction from the Obama order preventing lobbyists from joining an agency they had lobbied within two years.

Removing that provision made it easier for lobbyists like Lyons to join the administration, ethics experts said.

The former Hess lobbyist is hardly alone. E&E News identified seven officials at EPA, Interior and DOE who had recently lobbied those agencies.

Jeff Sands largely worked as a lobbyist for pesticide company Syngenta AG on agricultural issues between 2015 and 2017. But he also strayed into energy policy, lobbying on the renewable fuel standard and on wider issues like reforming EPA’s scientific advisory body.

And Mark Menezes, now DOE undersecretary, lobbied his present department on behalf of Berkshire Hathaway Energy until last year. A longtime utility lobbyist, he co-authored a report for the National Coal Council arguing that DOE neglected carbon capture and sequestration research in favor of renewables.

"Trump’s ethics executive order falls way short of what Obama had," said Craig Holman, a lobbyist for watchdog group Public Citizen. "We have now seen from the application of Trump’s program to ‘drain the swamp’ that it is not that."

Other parts of Trump’s ethics order are not being enforced, Holman said. One provision, left over from the Obama era, prohibits individuals who represented or worked for companies from participating in matters related to former clients for two years. A similar restriction bars registered lobbyists from working on any matter related to a former client.

That provision might be important in the case of Andrew Wheeler, who has been nominated to become EPA’s deputy administrator. Wheeler lobbied on behalf of Murray Energy Corp., an Ohio-based coal company, for more than eight years. Few companies have fought EPA harder over its efforts to limit pollution from coal-fired power plants than Murray, which has sued the agency on everything from the Clean Power Plan to its alleged failure to account for coal industry job losses stemming from air emissions rules.

Bob Murray, the company’s CEO, has been outspoken about eliminating more environmental rules. He presented the administration with an action plan, outlining a number of regulations that he wants to see erased or changed (Greenwire, Oct. 10). Among those rules are the Cross-State Air Pollution Rule, the Mercury and Air Toxics Standards, and EPA’s endangerment finding on greenhouse gases, the legal underpinning for carbon regulation.

Wheeler did not represent Murray in its court battles, and he appears to have done little direct lobbying before EPA. Much of his lobbying work was directed at Congress, public records show. But the Trump administration’s ethics provision preventing officials from working on matters related to their former clients for two years would seem to apply to him, ethics experts said.

Wheeler, in Senate testimony last week, said he does not anticipate needing any ethics waivers.

"I don’t think Trump understands his own ethics order," Holman said. "The bottom line is there are two key exciting elements, but they simply are not being enforced."

It’s unclear how the agencies are addressing potential conflicts of interest. A smattering of ethics waivers has been publicly released for some officials. EPA Senior Deputy Counsel Erik Baptist, for instance, received a waiver to work on the renewable fuel standard after lobbying for the American Petroleum Institute on the same issue (Greenwire, Oct. 25).

In another instance, Interior Deputy Secretary David Bernhardt said he would abstain from any matter relating to former clients for a year (Greenwire, May 11). Bernhardt was registered as a lobbyist for Rosemont Copper Co. until 2016 and has provided legal services to oil interests like Noble Energy Inc. and the Independent Petroleum Association of America, Senate disclosures and an ethics filing show.

But the situation is less clear for other officials. EPA did not answer questions about whether ethics waivers were issued for the officials identified by E&E News.

"Administrator Pruitt has assembled a staff of highly qualified individuals to help implement the president’s agenda and ensure that EPA will continue to promote policies that provide clean air and water, while encouraging economic growth," EPA spokesman Jahan Wilcox said.

When asked later about how EPA is handling potential conflicts of interest, the agency said in a statement, "All EPA employees get ethics briefings when they start and continually work with our ethics office regarding any potential conflicts they may encounter while employed here."

Interior and DOE did not respond to requests for comment.

Robert Meyers, senior counsel at Crowell & Moring LLP and a former EPA official in the Bush administration, rejected the notion that administration appointees should be judged solely on the basis of their lobbying work. Many are experts in their field who have been selected because their views align with the president’s, he said. Above all, they must follow the law.

"If you’re a political appointee, you’re accountable to who appointed you," Meyers said. "I think most people look through that prism: What’s the law say, and what’s the policy of the administration?"

He added: "If you’re not comfortable with that, you have to get out."

Janet McCabe, EPA’s former acting assistant administrator for the Office of Air and Radiation under Obama, echoed that point. She once registered as a lobbyist, as the executive director of a children’s health organization in her home state of Indiana, and now works at the Environmental Law and Policy Center, a green advocacy group.

Still, she said there is a fundamental difference between Obama-era appointees and those now working in the Trump administration.

"The difference I see is EPA’s mission is to protect public health, not the chemical industry or the fossil fuel industry," she said.