16 projects are coming. Will the grid fail? 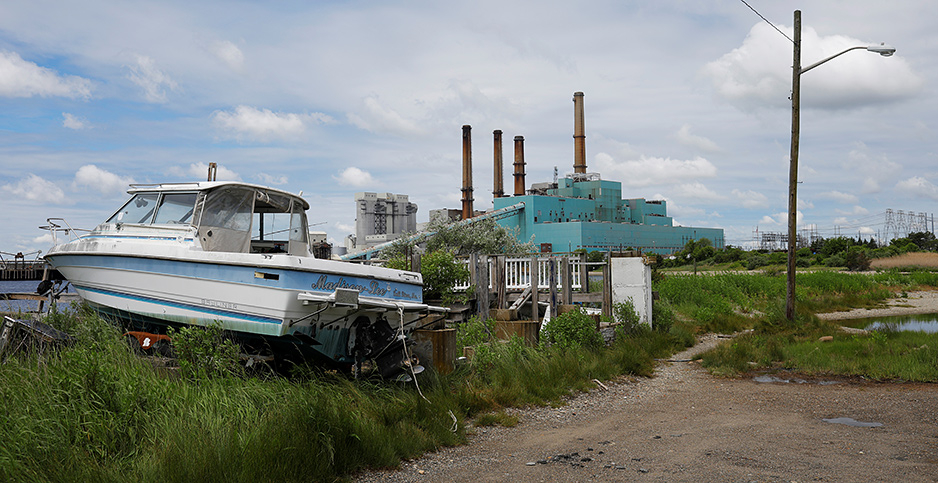 The Brayton Point power plant in Somerset, Mass., was shuttered in 2017 and later destroyed. Soon the site could be an electricity transmission hub for offshore wind farms. Brian Snyder/Reuters/Newscom

Second in a series. Read the first story here.

In May of last year, a ring of explosives planted around the base of two 500-foot concrete cooling towers at what was once the largest coal-fired power plant in New England brought them down.

In 18 seconds, they were reduced to dust and gravel. Then in February, the plant’s four soot-encrusted chimneys were felled like brick trees.

The demolition of the Brayton Point Power Station was the stunning first act of a national energy drama playing out before the residents of Somerset, Mass. (population 17,896).

The second act — still unfolding slowly —- started with a proposal for the Anbaric Renewable Energy Center on the cleared site. It includes plans for a refurbished seaport, facilities for making and assembling parts of offshore wind turbines, and a state-of-the-art electric cable connection to bring in the electricity from multiple wind farms at sea.

It was the first in a series of transformations underway up and down the East Coast to support 16 offshore wind farms planned in seven states. Those efforts will cost an estimated $70 billion altogether. They are part of still larger plans to eventually shift both U.S. coastlines to offshore wind and other clean energy sources.

The offshore energy resource in the United States is huge, but federal plans to develop it remain a puzzle with large gaps. Left unfinished are regulations for the nascent industry. Other problems to be worked out include the infrastructure that will be used to connect the turbines to the nation’s electric power grids.

These delays began with political shifts in energy planning during the last decade. Offshore wind was launched with enthusiasm in the final years of the Obama administration, culminating in a White House summit in 2015 that estimated it would generate 22,000 megawatts of "clean and abundant energy" by 2030. That’s enough to power 4.5 million homes.

The departments of Energy and the Interior issued a study at the summit predicting that the potential for U.S. offshore wind was "equal to about double the nation’s demand for electricity." It added: "We are confident that our nation stands at the forefront of a strong domestic offshore wind industry."

DOE gave grants to states to build a "regional roadmap" that would create a "cooperative path" to achieve the "economies of scale" needed to produce a U.S. supply chain creating thousands of jobs.

The old power plant had existing onshore electrical connections. Anbaric makes undersea cables to carry high-voltage direct current that it sees as the most efficient way to bring in large volumes of electricity from offshore.

"I can put 1,200 MW in a direct-current cable. If I have to move it to alternating current, I would need nine of them," explained Erin Clarke, a spokesman for Anbaric.

Anbaric’s idea is that Brayton Point could become a hub for the offshore energy industry. Part of that would include having batteries to store the offshore energy when it wasn’t needed. Direct-current, or DC, cables, Clarke acknowledged, are more expensive than alternating-current cables. But they can handle the huge amounts of offshore energy foreseen along the East Coast faster and more economically, she said.

Kevin Knobloch, who heads Anbaric’s offshore wind program, explained at a recent virtual forum — one of several held by the offshore wind industry to discuss its issues — that individual states are lumping together plans for offshore wind farms and the transmission lines that will connect them with onshore grid connections.

"I think there is a growing appreciation that it’s not going to get us all the way there. We should be thinking this through now and mapping it out," he asserted. Knobloch pointed out that plans have to be prepared for both offshore connections and onshore distribution.

"We’re talking about very large injections of offshore wind," he added, noting the system has to be flexible; "on high wind days, we need to be able to reroute that power to somewhere else."

After lease auctions handled by Massachusetts and other nearby states, the area is now scheduled to become a cluster of six wind farms. The major owners of most of them are Danish, Spanish, Portuguese, Norwegian, English and Dutch energy or oil and gas companies that haven’t seen the need for a more coordinated U.S. offshore grid system.

The result could be a tangle of multiple underwater cables from the various wind farms to feed multiple points in Massachusetts, New York, Connecticut and Rhode Island.

She noted that European governments worked out the needs of their offshore transmission systems before individual companies or provinces got involved. The best Anbaric could do, under the circumstances in Massachusetts, was to make a deal with the redeveloper of Brayton Point. According to Clarke, the agreement stipulates that Anbaric has the exclusive right to build a high-voltage DC cable — if it’s needed.

So far, states have chosen a number of "hubs" for offshore wind along the East Coast: Brayton Point; another along the Delaware River near Salem, N.J.; a third at Virginia’s Hampton Roads; and a number of other seaports to be chosen in New York and other states.

How to develop a grid infrastructure that is simple and cost-effective and that allows more growth in future years will be a problem for each one of them, predicts Eric Hines, a structural engineer who leads a team at Tufts University that tracks offshore wind development.

He worries that "until the U.S. government develops its footing" on the issue, existing lease owners "will grab all points of availability."

While European companies learned valuable lessons in their pioneering efforts in Europe, Hines believes the U.S. should not rely on them to make policies shaping the domestic transmission system.

"What individual developer just trying to get a single project done is going to worry about the rest of the connections? That is someone else’s problem, and the someone else is the people of the United States."

Hines sees two possible scenarios. "If every project connects their own wire into the grid," he says, "they will overload it. The grid’s not ready yet to get all these wires."

The second scenario would avoid what he calls "spaghetti in the ocean" by building grid networks at sea and onshore that can "deliver this power in a civilized way." It would also allow for future expansion.

"The question is now, how are we going to work together and to get it done? It feels hopeful, doesn’t it? After all these years of wondering whether we’re going to get beaten by global warming. We actually have a chance to fight it."

Hines’ group has found allies among some of the European companies involved in U.S. offshore projects.

"It’s fair to say that transmission is the greatest single hurdle to bring offshore energy to the [East] Coast," said Stefan Kansy, director of new projects for Energie Baden-Württemberg AG, a German developer.

"At some point, we have to do away with short-sighted individual approaches and engage more in cross-border talk," he asserted during a virtual forum. "Someone has to take up the slack."

At least three other issues may haunt offshore wind development in the U.S.

One is a peculiarly American problem, started by Wesley Livsey Jones, the late Republican senator from Washington state. He wanted to help Seattle shipping companies gain a better business footing after World War I. His solution was the Merchant Marine Act of 1920, which has become famous over the years as the Jones Act.

His approach was to ban the transportation of passengers or merchandise between points in the U.S. on ships that are not flagged and owned by U.S. citizens. His immediate goal was to ban foreign ships from supplying cities in nearby Alaska.

It is unlikely that Jones could have imagined the U.S. opting for skyscraper-size, ocean-based wind turbines as a major defense against a threat such as climate change. His law has been used over the years to build up the U.S. maritime industry. Court-based waivers to get around it have been hard to get.

Construction projects soon to get underway on the East Coast will require massive "turbine installation vehicles," sometimes called "jack-up boats." They are built with large holds and heavy cranes to carry, lift and install pieces of the giant wind turbines on the ocean floor.

They can cost up to a half-billion dollars apiece to build, and only a few exist in the world. The U.S. has none. To get around the Jones Act, two turbines recently built near Virginia Beach, Va., had to be tended by a ship brought in from Europe and based, for legal purposes, in Halifax, Nova Scotia.

U.S. projects will also require substantial numbers of medium-size specialized boats to act as floating hotels and warehouses for as many as 40 technicians that will serve two-week stints to build and maintain the rising turbine farms.

How all this might happen at a time when U.S. shipbuilders are backlogged poses an additional difficult question.

Then there is the matter of who will get the jobs building and running the offshore wind farms. Some of the foreign owners who control offshore leases have said they will employ some American workers.

That is not enough for Donnie Colston, director of the utility department of the International Brotherhood of Electrical Workers.

"Clearly, we think American workers should be doing not only onshore work but also offshore work too," Colston said at a recent virtual industry forum. "We have the ability to adjust."

How the two candidates for president might adjust to a sprawling U.S. offshore wind industry is yet another question. So far, they’ve said almost nothing about it.

President Trump, who has spent most of his time on energy matters trying to restore the coal industry, has sent some tweets that assert wind turbines "kill all the birds" and their sound might even cause cancer.

Former Vice President Joe Biden, the presumptive Democratic presidential nominee, comes from Delaware, a coastal state where politicians have been lining up to support offshore wind for more than a decade. In 2012, he spoke on the subject at the University of Delaware, his alma mater.