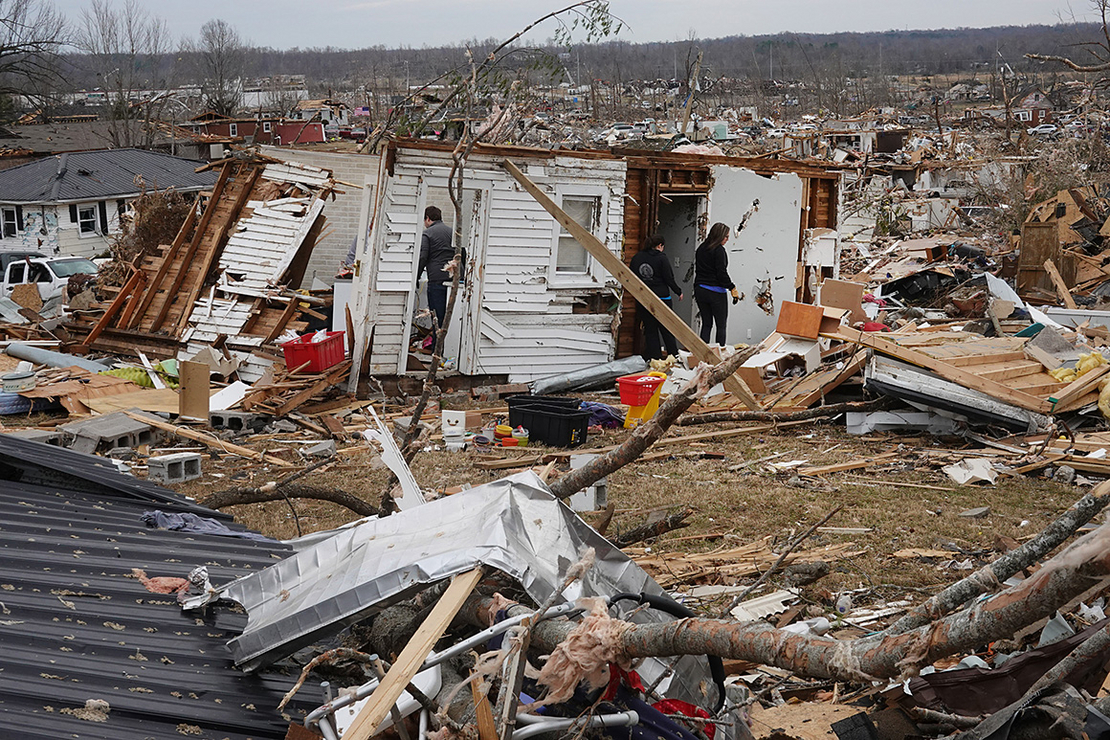 Residents of Dawson Springs, Ky., search the wreckage of a home after it was destroyed by a tornado in December. Scott Olson/Getty Images

When deadly tornadoes ravaged Kentucky in December, the nation was haunted by tragic scenes at a candle factory where nine workers were killed when the building collapsed.

Most people didn’t notice that the same tornado outbreak killed a 4-year-old boy and a 7-year-old girl. The children were inside a mobile home, which tornado experts say is one of the deadliest places to be during a tornado.

Seventeen of the 74 people killed during the devastating tornado outbreak four months ago were in mobile homes, according to reports that NOAA has put on its website since the disaster occurred. In addition to the young boy and girl, those killed in mobile homes included an infant boy.

The deaths bring new attention to the disproportionate number of tornado-related fatalities that occur in mobile homes, particularly in Southeastern and Appalachian states such as Kentucky, which have large concentrations of the structures.

More than 10 percent of residential dwellings in Kentucky are mobile homes or manufactured homes, according to census figures. The national rate is 5.5 percent.

“I tell people, get it anchored to the ground and get to a storm shelter. The only safe place during a tornado is outside a manufactured home,” said Stephen Strader of Villanova University, a leading researcher on tornadoes and mobile homes.

Studies show that at least 40 percent of tornado deaths occur in mobile or manufactured homes. Now researchers and safety experts are turning their attention to the tie-downs that are supposed to hold the structures in place during extreme winds, but which often fail.

Others are focusing on a gradual migration of tornado activity from the Great Plains to the Southeast, where there’s a higher concentration of mobile homes and hilly terrain that makes tornadoes harder to spot. Researchers are analyzing whether climate change is affecting tornado outbreaks and say their findings so far are inconclusive.

Companies that build the homes have “made great progress” in fortifying the structures with stronger walls and roofs, said Leslie Chapman-Henderson, president of the Federal Alliance for Safe Homes.

“The persistent problem is attaching it to the ground,” she said.

Even manufactured homes that are affixed securely at first can become dangerous as the hardware rusts, Chapman-Henderson said.

“It never compares to a site-built home,” she added.

Experts also are calling on stricter standards from the Department of Housing and Urban Development, which sets and enforces safety regulations for mobile and manufactured homes through its Office of Manufactured Housing Programs.

Manufactured homes are a newer type of residence than mobile homes and tend to be sturdier, though both are vulnerable to tornadoes because they are built off-site and attached to a platform.

“HUD needs to get with the modern times and update their wind-load requirements,” said David Roueche, an engineering professor at Auburn University.

HUD requires manufactured homes to withstand wind gusts ranging from about 85 to 130 mph depending on the wind zone in which a home is located. But the most damaging tornadoes on the Enhanced Fujita Scale of intensity involve winds well over 200 mph.

The tornadoes in Kentucky were as high as EF-4, which NOAA calls “violent” and involves winds of up to 260 mph that can throw cars, flatten houses and toss structures with a “weak foundation” for “some distance.”

The December outbreak killed people in four other states — Arkansas, Illinois, Missouri and Tennessee — and caused a total of 89 deaths, NOAA records show. It was one of the deadliest tornado events in U.S. history and the deadliest since the devastating Joplin, Mo., tornadoes killed 158 people in 2011.

But HUD standards haven’t been updated since the 1990s, Roueche said. “They were inadequate back then, and they’re still inadequate now,” he added.

Roueche said that as manufacturers have produced sturdier homes, tie-down equipment is getting weaker as companies look to cut installation costs through simpler designs.

“How we anchor them to the ground is actually worse now than it’s ever been,” Roueche said. “They have zero ability to resist any uplift.”

“You can’t have it where every time the smallest tornado comes through, your home is flipping upside down. That shouldn’t be a standard we accept for permanent living situations,” he added.

Kentucky and neighboring states are particularly dangerous for residents of manufactured homes during tornadoes because the homes are spread out across the landscape instead of being clustered in mobile home parks, which often have community tornado shelters, said Strader of Villanova.

The scattering also means that residents of manufactured homes often live far from the nearest tornado shelter and feel they don’t have the time to drive to safety, Strader said. Tornado warnings typically come less than 15 minutes before the tornado strikes, Strader said.

“In Kentucky, people got more than 40 minutes of warning. But they didn’t know where shelters were or if they were open,” he said. “Most manufactured home residents know they are not in a safe location. They want to get out but they lack the self-efficacy to do that. They could be elderly, disabled or asleep.”

Seven of the 17 manufactured home residents killed in the Kentucky tornadoes were age 66 or older, NOAA records show.