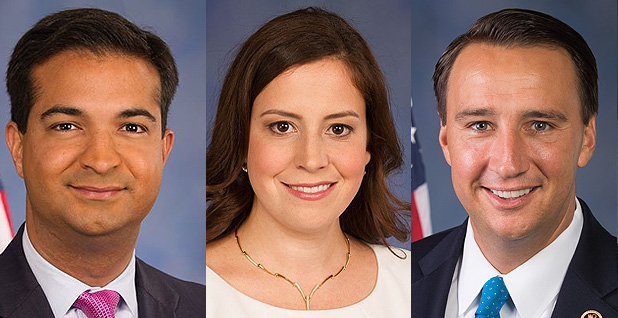 The Republican climate resolution that jump-started a conversation on global warming ahead of Pope Francis’ 2015 visit to Capitol Hill is back.

In addition to acknowledging the problem of warming, the 17 climate-savvy House Republicans backing the mainly symbolic legislation say they are prepared to embrace policies that help cut carbon dioxide emissions or adapt to the impacts of climate change.

From streamlining the permitting process for renewable energy projects on public lands to protecting Energy Department research and grant programs from cuts proposed by the Trump administration, a small menu of policy options emerged during interviews with co-sponsors.

Curbelo said yesterday that he "definitely" expects the group to push back on any proposed cuts to climate-related programs at U.S. EPA and elsewhere, though he cautioned, "I don’t want to invest too much in presidential budgets. … It’s Congress that passes the budget."

Trump’s interest in working with Congress on a sweeping infrastructure package could provide an opportunity to fund sea walls and other investments in coastal communities, Curbelo said.

"Environmental infrastructure is just as important as roads and bridges and rail," he said.

DOE research and grant programs "have proven themselves to be of a high value," Costello said on the subject of budget cuts. While EPA from a rulemaking perspective has done things that "some" find objectionable, he said, he would "really want to look closely" at any proposed funding reductions.

"The real challenge is going to be the transportation sector, and I’m very much open to economically viable solutions that help us reduce CO2," Faso said.

Faso replaced Rep. Chris Gibson (R-N.Y.), who retired at the start of the 115th Congress.

Gibson introduced the same language — which assigns human emissions some responsibility for driving harmful warming and states that "if left unaddressed, the consequences of a changing climate have the potential to adversely impact all Americans, hitting vulnerable populations hardest" — last year with 10 co-sponsors. That number grew to 16.

‘We have come a long way’

Gibson predicted before departing from Congress that climate change would be an issue on which the House GOP could make inroads over the next two years, despite hostility from the White House (E&E Daily, Nov. 29, 2016).

Curbelo has emerged as one of the most vocal critics of his party’s rejection of climate science, heading up the bipartisan Climate Solutions Caucus with fellow South Florida Rep. Ted Deutch (D) (E&E Daily, March 10).

"We have come a long way, and we also recognize we have a long way to go," Curbelo said yesterday. "But we’re moving in the right direction, and we’re getting to the point that the people realize that this is a real challenge. They’re focusing on the evidence, on the science, on the facts surrounding climate change, and that is what’s going to lead our actions on this."

Curbelo said the group’s main goal with the first resolution was to get a conversation started among fellow Republicans about the effects of climate change. Now, they are hoping to be more of an "idea factory" to talk about climate solutions they can work on with colleagues on both sides of the aisle.

It’s time for Republicans to get with the times and acknowledge how important climate issues are to constituents who face rising seas, he said.

"The polling is very clear," the coastal lawmaker said. "A clear majority of Americans understand that this is a challenge we’re facing. When you look at younger voters, the numbers are staggering. I’ve seen polling where over 80 percent of millennial voters consider this a major priority for them."

But neither the 17 co-sponsors of the resolution nor the 18 GOP members of the Climate Solutions Caucus committed to any specific course of action.

Amodei said there were still lingering scientific questions about "if" climate change is "man-caused" and that he is trying to do "the homework" by being part of the effort.

"If that offends some of the folks on the more conservative side, then it’s like, ‘Well, hey, I’m sorry, but I’m not going to apologize for attempting to be fact-driven,’" Amodei told E&E News.

The text of the resolution doesn’t explicitly make the link between fossil fuel emissions and climate change, noted Union of Concerned Scientists President Ken Kimmell. Still, Kimmell said he was "heartened" to see it introduced.

"There is strength in numbers, and I hope that this sizable group of responsible leaders will have an impact on votes in Congress," Kimmell said.

The World Resources Institute and the political arm of the Environmental Defense Fund similarly welcomed the news.

"While [EPA Administrator] Scott Pruitt and the Trump administration move backward with both rhetoric and action that contradict settled science and public opinion, this resolution recognizes the role humans play in contributing to climate change and the need for congressional leadership on this pressing issue," said EDF Action President Elizabeth Thompson.

Conservatives for Responsible Stewardship celebrated the geographic diversity of the co-sponsors.

Love, for instance, represents a solidly red district in Utah, where 48 percent of people think global warming is caused mostly by human activities, according to a recent polling analysis by Yale University (Greenwire, Feb. 27).

"My constituents’ concerns are my concerns, and many of them are worried about the impact a changing climate can have on Utah’s ski industry. Others are worried about an increase in fires," Love said, when asked how her views align with those expressed in the polls.

"While this has been a good year for snowfall, we should continue to work to mitigate risk and exercise good stewardship," Love said.

The resolution in its first paragraph pledges to base policy decisions on "science and quantifiable facts on the ground," but it does not explicitly mention the words "climate change" until it arrives at a section on national security.

In that paragraph, the resolution notes that the Defense Department’s Quadrennial Defense Review describes the effects of a changing climate as "threat multipliers" that could contribute to poverty, environmental degradation, political instability and social tensions in countries hit hardest by the effects of global warming.

Bacon, who joined the climate caucus within his first weeks on Capitol Hill, has drawn the link between climate and challenges he addressed while serving in the Air Force.

"As a commander of air bases in both Nebraska and Germany, I managed several important environmental programs to include resettlement of bird populations to reduce hazards to aircraft; incorporation of cleaner fuel technologies to minimize aircraft impacts on the environment; and proper disposal of hazardous chemicals used with our aircraft," he said last month.

DOD’s belief that climate change is a national security "threat multiplier" was emphasized this week in testimony by Secretary of Defense James Mattis, the retired Marine general who has long been an advocate for alternative fuels to keep fighting forces nimble in combat situations (E&E News PM, March 14).

A handful of retired high-level military leaders expressed their support for the resolution today in a release from the Center for Climate & Security.

"I’m very excited to see the Republican Climate Change Resolution introduced to the Congress," said retired Navy Rear Adm. David Titley, an advisory board member at CCS. "Our nation’s long-term security is critically dependent on moving away from fossil-based fuels to lessen the worst risks of climate change. This change will not happen without support and leadership from the Congress, in partnership with the administration. The Republican Climate Change Resolution is a good first step towards a serious bipartisan policy discussion."