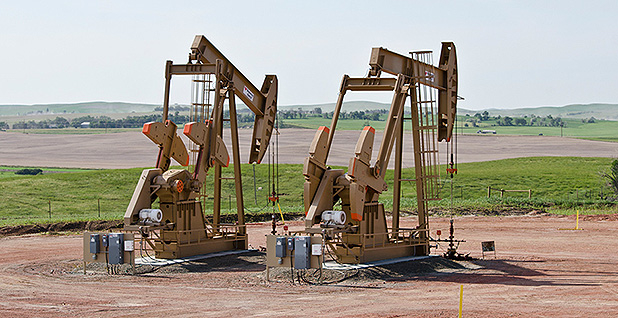 Oil-producing states are bracing for spending cuts as the coronavirus pandemic continues to put a damper on the industry.

North Dakota’s oil production stayed near a seven-year low in June at 890,000 barrels a month, for instance. That’s a slight increase from May but still about 40% below the state’s output in December.

Oil production tax revenues are 15% lower than forecast for the two-year budget cycle and a whopping 83% lower in July, according to North Dakota budget figures.

The state tucks away most of its oil money in dedicated funds that are reserved for one-time expenditures, Lynn Helms, the state’s top oil regulator, said on a conference call Friday.

Other oil-producing states are running into similar funding shortfalls for everything from public schools to public maintenance.

Many of them were still recovering from the 2008-09 recession and the drop in oil prices that lasted from 2014 to 2016, according to Lucy Dadayan, a senior research associate at the Urban Institute in Washington.

Now, some analysts are predicting the oil crash could stretch into 2021.

"The oil states are going to see challenges not only because of COVID but because of the steep declines in oil prices," Dadayan said.

In Oklahoma, the Legislature was faced with a gap of $1.3 billion when it met to write its spending plans for the 2020-21 fiscal year, which started in July. Lawmakers were able to avoid cuts to education, but they largely depleted the state’s $1 billion reserve fund, said Paul Shinn, a budget analyst at the Oklahoma Policy Institute, a progressive-leaning think tank.

That could force them to reconsider the state’s education spending when they contemplate the 2021-22 budget, Shinn said. It also could reopen a bruising political battle that saw Oklahoma’s teachers walk out of classrooms statewide until lawmakers raised taxes on oil and gas production (Energywire, April 11, 2018).

In Texas, Comptroller Glenn Hegar (R) told state legislators in July the state will have $110.2 billion to spend in the 2020-21 biennium, down from an estimate of $121.8 billion in October.

In New Mexico, Gov. Michelle Lujan Grisham (D) called a special legislative session in June to trim the state’s budget. Lawmakers cut about $415 million in general fund spending, leaving $7.2 billion to spend in the fiscal year that started in July.

Helms, North Dakota’s top oil regulator, said his state’s production, which mostly comes from fracking in the Bakken Shale field, will recover to about 1 million barrels when figures are compiled for July and August. But it’ll ramp back down as previously drilled wells decline.

"Unless prices improve … that’s going to be a temporary rise and it won’t be sustainable," he said.

Already, communities in the Bakken region are seeing signs of the industry retrenching.

A few miles away in Dickinson, N.D., the local school district is negotiating to buy a collection of warehouses and other buildings that Halliburton hasn’t used in about a year, Superintendent Shon Hocker said.

Halliburton has closed the site outside Belfield during previous downturns but always reopened it, City Councilman Bruce Baer said. The site is outside the city limits so the sale won’t affect the community’s taxes, but it’ll mean fewer good-paying jobs in the region.

"I don’t foresee that coming back anytime soon," Baer said.

Most states are seeing downturns in tax revenue from the recession that the novel coronavirus caused. The shortfall could be as much as $555 billion from fiscal 2020, which ended June 30 in most states, to fiscal 2022, according to the Center on Budget and Policy Priorities.

But the impact to oil-producing states could be larger, considering COVID-19 continues to press the industry and pushed oil demand down by as much as 20% in the spring.

The International Energy Agency said last week that oil demand could be lower than expected for the rest of 2020. In the U.S., the number of land-based drilling rigs fell to 244 on Friday, setting another record low, according to data from Baker Hughes Co.

The downturn hit states unevenly. Overall, U.S. oil production dropped 22% from December to May, the last month for which statistics are available, according to the Energy Department.

Even though North Dakota’s production recovered slightly in June, its 42% decline from December to May was the biggest among the major oil-producing states, followed by Oklahoma at 35%.