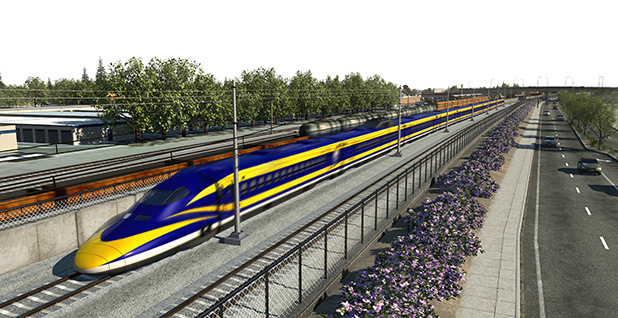 California is starting to dole out nearly $2.2 billion generated by its cap-and-trade program to cut carbon emissions, allocating funds to hundreds of projects. Winners include regional rail, electric car rebates and rooftop solar for low-income residents.

Revenue from auctions of pollution permits under the system has bolstered the state’s budget. A database compiled by ClimateWire shows for the first time precisely where funds have been directed. It reveals that more than $1.4 billion has been pledged to more than 350 recipients.

There’s money for reduced bus fares for Mendocino College students, for bicycle racks in Los Angeles, for a trash-composting operation in Fresno County, and to plant more trees in urban areas.

Big business is getting an indirect financial boost. Some agencies and groups on tap to get funds have hired companies to perform the approved work. Other recipients have put the grants toward ongoing projects with existing contracts. Corporate winners include Siemens, solar company SunPower Corp., locomotive builder Electro-Motive Diesel Inc. (EMD), and construction joint ventures Tutor Perini/Zachry/Parsons and Dragados/Flatiron.

"We’re spending it in accordance with an investment plan that I think has a very good mix of long-term and short-term projects, that has geographical balance," Mary Nichols, chairwoman of the state’s Air Resources Board (ARB), said in an interview. The state’s plan will demonstrate "that cap-and-trade revenue can be used to address issues that not only cause our current greenhouse gas emissions … but also have other multiple social benefits, as well."

The Golden State under its economywide trading system auctions pollution permits to businesses that need them to cover high greenhouse gas emissions. Those started at $10 a carbon ton and now run about $12. Sales of those have reaped nearly $2.2 billion through May, not including the portion that is controlled by the Public Utilities Commission and returned to utility ratepayers.

California wants to shrink greenhouse gas emissions 40 percent below 1990 levels by 2030. Spending cap-and-trade proceeds to help achieve that goal is one part of the state’s broad approach, Nichols emphasized.

"We never said that the money from the cap and trade is going to be adequate to meet our 2030 goals," Nichols said. "It’s a piece of the puzzle. But it’s also designed to illustrate things that can be done that could lead to further investments" from cities, counties or private companies.

California could not provide one comprehensive list of where existing cap-and-trade funds are being awarded. Multiple agencies are charged with handing out the money, and each has its own tally of recipients. ClimateWire merged those lists into a database.

The bulk of those receiving dollars have been told they’re getting the funds, but have yet to pocket any money. There are varied systems for releasing the dollars, depending on which state agency holds the revenue. In many cases, recipients are required to spend first and then seek reimbursement.

Under a deal Gov. Jerry Brown (D) made last year with the Legislature, 60 percent of cap-and-trade money is continuously dedicated to specific categories, including the bullet train, affordable housing near transit, intercity rail programs and low-carbon transit operations. The Legislature gets to decide how to spend the rest of the auction proceeds.

The bullet train was the top winner in that pact Brown made. A quarter of auction proceeds go to the line intended to connect Los Angeles and San Francisco by 2029. It’s received $750 million for the last and current fiscal years.

In addition, high-speed rail has the option to take another $400 million, as repayment of a loan that Brown’s fiscal 2013-14 general fund budget borrowed from cap-and-trade revenues.

There is no expiration date on the agreement giving the train one-fourth of the proceeds. Monies for high-speed rail could grow in years ahead as the price of carbon allowances increases. There are critics of that deal.

"There’s a disproportionate amount going to high-speed rail compared to the other needs," said Bill Magavern, policy director with the Coalition for Clean Air.

The state instead should accelerate funds to clean up buses and trucks that move freight, he said. That would "not only reduce greenhouse gases but provide quick relief to people who are breathing polluted air."

Because about 40 percent of California’s greenhouse gases come from cars, ways to lure people out of them influenced planning. Local transit was another big collector of cap-and-trade dollars, so far receiving allocations of $224 million.

Of that, the San Francisco Municipal Transportation Agency (SFMTA) will get $41 million to expand its light-rail system, with the monies going toward part of a larger deal with Siemens to make 64 next-generation vehicles.

Metrolink, a rail system in Los Angeles, Orange, and nearby counties, also won $41 million. It will pay for nine fuel-efficient locomotives, supplementing a project to add 20 of the cleaner trains. The agency has hired LaGrange, Ill.-based EMD to do that work.

The transit money is noteworthy, ARB’s Nichols said, but as part of the state’s push to get Californians out of polluting cars, "it’s a drop in the bucket."

"Transforming our urban transportation system is a multi-year, many billion-dollar project," Nichols said. "We built the system over decades. We’re heavily invested in the status quo. To make it happen, we’re going to have to do many things," including regulation and subsidizing cleaner vehicles.

About $131 million of cap-and-trade funds has gone for rebates on purchases of low- and zero-emission cars. Those ranged from $1,500 for plug-in electric vehicles to $5,000 for fuel-cell electric cars. Another $160 million is proposed for the current fiscal year.

Roughly $122 million will finance "sustainable housing," homes located near buses, light rail and trolleys, with a portion reserved for lower-income residents. The goal is to help those people avoid commuting long distances by car.

The drought-plagued state also is giving cap-and-trade money to cut water use.

A number of cities and water authorities will receive about $2.5 million each for projects to shrink consumption, which also pares energy use and greenhouse gas emissions. Farms receiving the money have pledged to shrink water and energy use.

F & D Giacomazzi Farms in Tulare is receiving $150,000 to install drip irrigation as a replacement for flood irrigation on its almond trees. It’s also adding 1 megawatt of solar. Broken Earth Winery in San Luis Obispo will get $4,657 to put in weather and soil moisture monitoring hardware.

About $29.2 million of the cap-and-trade money will add solar to the homes of 1,780 low-income residents, while $41.1 million will fund improvements like better insulation and solar water heaters. In Fresno, SunPower is supplying the photovoltaic panels for the part of the project in that area, a small slice of the statewide total for solar.

Linda Vang, 40, a Fresno resident, won a grant that added rooftop solar on the three-bedroom home she shares with her husband and 10 children, ages 2 to 20.

Before the panels were added, their electric bills averaged about $200 per month, which they struggled to afford with her husband’s $40,000-a-year bus driver salary. Vang sometimes borrowed money from her sister-in-law to get by, she said. With the PV panels, her last monthly electric bill was $15.

"I’m happy because I have money to buy food for the kids, to buy clothes for the kids to go back to school," Vang said. "It’s a very good program."

The Legislature gets to decide how to spend 40 percent of auction proceeds. For the current fiscal year, lawmakers haven’t settled on where to spend those dollars.

There are bills seeking to fund far more than is currently available, according to a report from the California Taxpayers Association. It said that state lawmakers have proposed rolling out more than $4.8 billion in cap-and-trade revenue — four times the total amount that Brown’s budget projects will be available. The state Legislative Analyst’s Office, or LAO, a nonpartisan watchdog, said in February that the total in auction proceeds could rise if allowance prices climb.

There are some questioning whether the portfolio of projects receiving cap-and-trade money is sufficiently diverse. Assemblymember Henry Perea (D) has offered legislation, A.B. 857, that would allow part of the money to go for buying natural gas-powered long-haul trucks that would replace diesel ones. While it’s still a fossil fuel, he said, the emissions are lower than for diesel.

"We’re probably a long way away from an electric long-haul truck," Perea said. Natural gas trucks, he said, would offer cleaner air around the Fresno-area communities he represents.

It’s important to clean up tailpipe emissions of long-haul trucks, but the state has other programs to do that, said Kathryn Phillips, Sierra Club California’s executive director. Money from cap and trade shouldn’t go to natural gas vehicles, she said.

"It emits methane, which is a highly potent greenhouse gas," Phillips said. "We’re just saying don’t give these funds that are specifically for greenhouse gas reductions to natural gas."

Perea has also offered a bill to provide assistance to small towns in filling out grant applications. Otherwise, he said, they can’t compete. Perea said he’s also bothered that many of the big cap-and-trade grants are going to projects in big cities, like Los Angeles and San Francisco.

"I think part of my concern with cap and trade from the beginning has been twofold," Perea said. "One, is this the right mechanism to address air quality? And two, has there been equity in the funding? I would say so far, the equity doesn’t exist."

Others said that the state shouldn’t be spending the cap-and-trade money at all.

California Chamber of Commerce in a lawsuit now in the state’s Appellate Court argued that ARB lacks the authority to auction allowances. The chamber also said that forcing businesses to buy the allowances amounts to a tax. Under state law, new taxes must be approved by a two-thirds vote of the Legislature or at the ballot box.

"These are essentially ill-gotten gains," said Loren Kaye, president of the California Foundation for Commerce and Education, a think tank for the state’s Chamber of Commerce.

If the court rules against the state, "they’re going to have to go somewhere else in the general fund to refund those monies to the folks from whom they’ve illegally collected it," said Dorothy Rothrock, president of trade group California Manufacturers and Technology Association (CMTA).

"To the extent that they’re spending this money before it’s determined to be legal, I think they’re putting the general fund at risk," she said.

"Even if the courts determine that the state does have the authority to collect auction revenue, it might be required to target spending in certain ways, such as on activities primarily intended to reduce GHG emissions," the LAO said.

Nichols said that the governor and Legislature have decided to start spending the auction proceeds now. It was important to put the money to work, she said, and to demonstrate that it could be used in ways that met the goals of the program.

"It would have been very foolish to refuse to spend the money while waiting for the courts to resolve the issue," Nichols said.