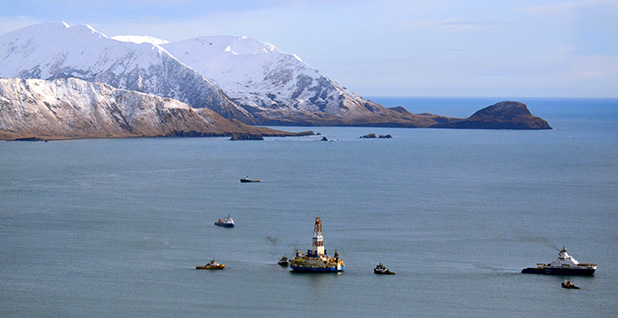 Royal Dutch Shell's floating drill rig Kulluk undergoes testing in Alaska's Kiliuda Bay in 2013. Shell's vision for Arctic oil came to an abrupt halt after the company announced in 2015 that it hit a dry hole and was terminating its Arctic exploration program. Photo courtesy of AP Images.

In early 2015, as world oil prices tumbled below $50 per barrel, Alaska had two aces up its sleeve that seemed to offer hope for the state’s petroleum-dependent economy.

First, despite lingering low oil prices, Royal Dutch Shell PLC was steadfastly determined to drill for oil off Alaska’s northern shores. In 2008, the Anglo-Dutch company had purchased 275 Chukchi Sea leases for $2.1 billion and was confident it would find a mother lode of oil in the American Arctic.

Over the last year, oil independents Armstrong Energy, Caelus Energy LLC and 88 Energy Ltd. have announced dramatic new oil finds on the North Slope. But those projects are in the preliminary stages of development and aren’t likely to make up for the continued declining production at Alaska’s elephant oil fields for years to come, if ever (EnergyWire, Oct. 12).

The second ace was Alaska’s generous system of oil and gas tax credits that continued to lure major oil companies and independents to the petroleum-rich North Slope even as world crude prices were collapsing. In January 2015, ConocoPhillips Alaska President Trond-Erik Johansen predicted that the state tax benefits would help reverse Alaska’s declining oil production and increase the volume of oil flowing through the Trans-Alaska Pipeline System (TAPS).

In the end, however, Alaska’s luck didn’t hold up. First, Shell abandoned its Arctic oil development program. Now the state tax credits are on the chopping block.

Like the shale oil states in the Lower 48, Alaska is feeling the pain of the world oil price crash. At least five companies have left the state, and 3,000 oil and gas industry jobs have been lost in the last two years. After relying on oil revenue for up to 90 percent of its unrestricted general budget, Alaska is now struggling with a $3.1 billion budget deficit.

At the same time, oil production is steadily declining on the North Slope. In 1988, TAPS carried its largest load — 2.1 million barrels of oil per day — from Prudhoe Bay to an export terminal in Valdez. Since then, however, oil throughput for the 800-mile Alaska pipeline system has fallen to around 500,000 barrels per day, threatening the long-term viability of the pipeline.

"We face some big political hurdles," noted Gunnar Knapp, former head of the University of Alaska’s Institute of Social and Economic Research. "In Alaska, we’re having to face up to the fact that the money that we get from oil is not going to cover our essential bills."

‘Punch in the gut’

In late September of last year, Alaska suffered a severe blow when Shell announced it had hit a dry hole at the company’s Chukchi Sea leases and was terminating its Arctic oil exploration program. Company officials said their decision was influenced by continued weak world oil prices and an unpredictable federal regulatory environment.

The move, which one state official described as a "punch in the gut," prompted a string of other oil companies to abandon their Arctic holdings and leave town. Today, only Shell owns a lease in the Chukchi Sea — a single lease that’s due to expire in 2020.

Most oil companies also relinquished their federal Beaufort Sea leases in Alaska’s eastern Arctic waters. Hilcorp Alaska LLC is currently the only leaseholder seeking to produce oil in that region.

Shell’s abrupt departure was a serious financial blow to dozens of Alaska companies that had secured lucrative contracts with the oil giant. The Arctic Slope Regional Corp. (ASRC), a Barrow-based Native corporation, immediately cut 100 jobs in its energy services and construction divisions.

Since then, continued low oil prices have triggered additional cutbacks and compelled the Native corporation to scale back its 2016 shareholder dividend by 33 percent from 2015 levels, according to ASRC Chief Operating Officer Butch Lincoln. The company is also reorganizing and diversifying into new businesses.

"On the Arctic Slope, we’re trying to position ourselves to weather this storm, to get our operating model right for the long term and prepare for the cycle when oil rebounds," Lincoln said.

Shell’s departure is reshaping the future of Alaska’s oil industry. ASRC and other oil-related businesses were counting on Shell to pour new oil into the Alaska pipeline network. In addition, Shell was tentatively planning to build a 500-mile onshore pipeline system to carry crude from its Chukchi leases to TAPS. That new infrastructure would have encouraged development of other offshore Arctic leases and onshore oil reserves along the new pipeline route, Lincoln noted.

Also stung by Shell’s departure was the Bering Straits Native Corp., which represents communities along the Bering Strait in western Alaska. The Nome-based corporation had hoped to develop a new deepwater port facility at Port Clarence, 67 miles northwest of Nome.

But gaining private funding for that venture was dependent on continued oil and gas development in Alaska’s Arctic waters, said Matt Ganley, vice president of external affairs at the corporation.

"It would’ve been the economic engine that could have lifted the port into becoming a real area of activity and commerce for the region," Ganley explained. "Shell’s decision really set us back on our heels."

Even before Shell withdrew from the Arctic, Alaska’s oil and gas contractors saw the writing on the wall, said Rebecca Logan, general manager at the Alaska Support Industry Alliance.

"Our members recognized that low oil prices were on the way and were going to be around for a long time," Logan said. "They started by restructuring their businesses, trying to be more efficient. Then they moved to the stage of having to reduce wages and benefits. Now we’re seeing layoffs."

Kara Moriarty, president of the Alaska Oil and Gas Association, said Alaska oil companies "are very nervous about what’s going to happen with our near-term economy, especially when you have an anchor company like Shell no longer investing $1 billion to $2 billion a year in the economy."

Alaska’s oil-related companies are also fighting to protect the state’s generous system of oil tax benefits, which were adopted when crude prices were high. During this year’s state legislative session, oil industry lobbyists succeeded in protecting most of the credits for North Slope oil development. But the Legislature phased out tax rebates for oil and gas operations in the Cook Inlet in southern Alaska.

At the end of the legislative session, Alaska Gov. Bill Walker (I) went a step further, using his line-item veto power to postpone payment of $430 million in state energy development tax credits that were due to the oil companies. The governor argues that the state can no longer afford its generous system of oil tax benefits.

"We are currently upside down in our oil tax credits," Walker said in a speech this spring. "We’re paying out more in credits and deductions than we’re receiving in production taxes. That’s not smart, and it’s not sustainable."

But energy companies are fighting back. Caelus CEO Jim Musselman argues that his company needs the state tax credits to make up for the high cost of developing its Smith Bay leases along Alaska’s remote Arctic coast.

"It’s something that no other oil regime is doing at this time when companies are bleeding red ink and laying off 10, 20, 25 percent of their workforce," MacKinnon said. Alaska needs to maintain a tax system that encourages future oil development, she argued, rather than reaching into the industry’s big pockets to offset the budget deficit.

"If you expect a rebound in your economy, you have to be competitive. Or you will lose market share," she asserted.

Despite the oil price collapse, Alaska’s oil production numbers actually increased by 3 percent in 2015, primarily because companies had invested in resource extraction projects long before the oil prices started to decline.

"We have long lead times here," noted Moriarty. "There were a lot of oil investments made in Alaska back in 2013 and 2014, and that production is starting to hit the line."

Unlike with the shale oil operations in the Lower 48, Alaska’s petroleum is extracted using conventional oil wells sunk in remote locations. Those projects can take years to permit and build. Due to environmental and logistical restrictions, the North Slope oil facilities are generally constructed in the dead of winter, when ice roads can be built across the frozen Arctic tundra.

"Alaska’s oil production is much more project-oriented," explained Alaska Department of Labor economist Neal Fried. "You plan it kind of like a construction project. These are longer-term projects that take a long time to be permitted and get funding. They will take longer to shut down. But they’ll also take longer to build back up."

In the near term, the Alaska oil industry isn’t likely to return to the glory days when oil prices were high, state tax credits were lucrative and companies like Shell appeared poised to launch a new era of oil development in the state.

Instead, things could get even worse.

At the very least, they’re heavily lobbying the White House to drop new Arctic oil and gas leasing programs from the Interior Department’s upcoming five-year plan for offshore leasing. If regulators exclude those leases, all Arctic drilling would be off the table until the mid- to late 2020s.

The state could also be hit by declining oil demand, which could hold down the price of oil and gas for years or even decades. Amy Myers Jaffe, executive director of energy and sustainability at the University of California, Davis, is predicting that new renewable energy technologies and electric cars could "eliminate demand" for new oil and gas resources.

"I think the twilight is upon us for oil and gas development in Alaska," Jaffe said.

But the oil companies are eager to maintain their future options for drilling in Alaska, urging the state and federal governments to continue to offer new leases in America’s Arctic waters, as well as on the state’s oil-rich North Slope.

In fact, the industry and Alaska state officials want open access to all lands in the state, including the Arctic National Wildlife Refuge and parts of the National Petroleum Reserve-Alaska that are now protected under federal environmental regulations.

However, with current oil prices regularly dipping below $50 per barrel — which is the rough break-even point for Arctic onshore development — the energy giants aren’t likely to bid for any new Alaska leases for the foreseeable future.

For his part, Walker has been more focused on natural gas than oil. The governor maintains that Alaska’s future lies in commercializing the 34 trillion cubic feet of natural gas available on the North Slope.

For the last 2 ½ years, Alaska has been working with Exxon Mobil Corp., BP Alaska and ConocoPhillips Co. on a multibillion-dollar venture to build an 800-mile pipeline and export facility in Alaska.

But with the international oil giants reluctant to move forward because of low oil and gas prices, Walker wants the state to take the lead on the project. Walker insists that the liquefied natural gas export venture would spark a new economic boom for the state (EnergyWire, July 12).

Many state legislators are less enthusiastic about Walker’s plan. And economists note that although the project would produce thousands of construction jobs, Alaska wouldn’t earn nearly the same level of revenue from LNG exports as it has from oil.

Meanwhile, despite hard times in the oil and gas industry, Moriarty of the Alaska Oil and Gas Association said the industry isn’t giving up on Alaska’s lucrative natural resources.

"It’s not a doomsday," she said. "It’s not ‘the sky is falling.’ But people are saying we’re just going to be very cautious, very reserved. There’s just not a lot of excitement in the industry right now."