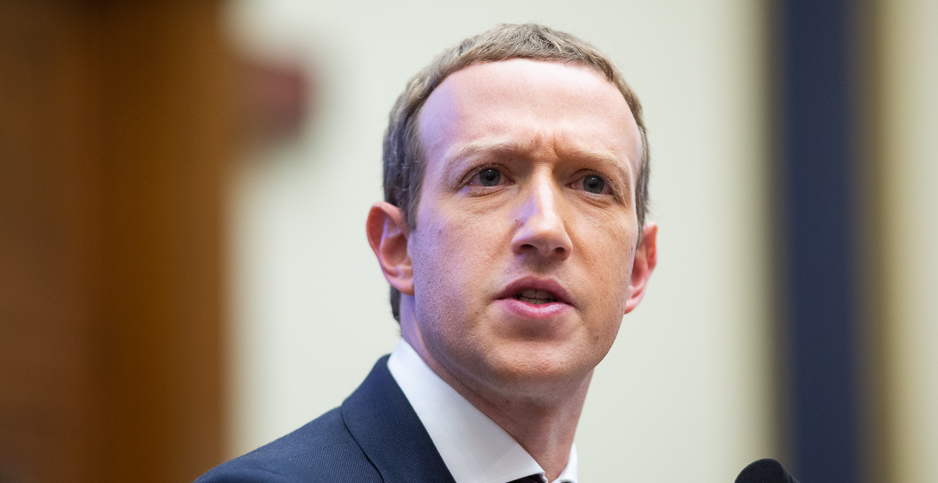 "Withdrawing from the Paris climate agreement is bad for the environment, bad for the economy and it puts our children’s future at risk," the company’s CEO wrote.

The sentiment is reflected in Facebook’s corporate sustainability policy. The technology giant has committed to cutting its operational greenhouse gas emissions 75% of 2017 levels by this year and pledged to power all its operations with renewable energy by 2020.

No American corporation signed more deals than Facebook to buy electricity generated by wind and solar in 2019, according to the Renewable Energy Buyers Alliance.

But when it comes to the challenge of curtailing climate misinformation on Facebook, Zuckerberg and his company have been silent. The platform is a hive of climate falsities and obfuscation, as posts about the Paris Agreement by conservative groups linked to the Trump administration make clear.

The Heartland Institute, a clearinghouse for climate misinformation, posted a video for its 100,000 Facebook followers saying that the climate accord could cost each American family $20,000 in lost income. The Texas Public Policy Foundation describes the Paris Agreement as "detrimental to the global economy, prioritizing liberal elite ideology over human well-being."

The Committee for a Constructive Tomorrow said that "the Paris Agreement on Climate Change, is less about the weather and all about a money-and-power grab."

Misinformation on Facebook muddies the wider climate debate, giving life to false narratives about everything from the price of renewable energy to the impact of carbon dioxide emissions on the planet, said Shahzeen Attari, a professor at Indiana University who studies behavior and climate.

"They’re reducing their own carbon footprint and, in doing so as a large company, they are speeding up innovation in that sector," Attari said. "But they aren’t changing the deeper structural narrative that is needed to solve the climate problem worldwide."

The company’s discordant approaches on climate raise questions about the effectiveness of its carbon-cutting strategy and highlight Facebook’s unique power in shaping the political debate. The platform boasts of having 1 billion users worldwide.

The company has broadly resisted efforts to more tightly police the information its users share on topics including climate and race, arguing that it’s a suppression of free speech. In a speech at Georgetown University last year, Zuckerberg argued that his company should not be an arbiter of truth.

Facebook employs a network of fact-checkers, an effort that it says is designed to prevent the spread of misinformation on the platform.

"We are committed to fighting climate change on our platform and through the way we operate our company," Facebook spokeswoman Melanie Roe wrote in an email. "We’re also the only platform with a global network of over 70 fact checkers, many of whom regularly rate false claims about climate science, which we then label and reduce its distribution."

Critics maintain that the company’s approach is riddled with loopholes. They note that Facebook rolled back one of its own fact-checks by redesignating it as an "opinion." That move allowed inaccurate information to be posted by a group that says burning more fossil fuels will make the planet healthier (Climatewire, June 23).

The company’s climate stance stands in contrast to its approach on the novel coronavirus, a topic on which it has intervened to promote scientifically accurate information. Meanwhile, climate scientists like Katharine Hayhoe, a prominent researcher at Texas Tech University, have been blocked from promoting information on the platform (Climatewire, July 6).

"I think it’s incredibly irresponsible for Facebook to essentially throw up their hands and say there’s nothing we can do … especially given that they’ve shown there is something they can do about it because they’ve cracked down on COVID misinformation," said Ed Maibach, a professor at George Mason University who studies climate communication.

Tech companies have long fancied themselves climate leaders. Amazon.com Inc. and Google have pledged to achieve net-zero emissions in the coming decades, while Microsoft Corp. is aiming to achieve negative emissions by 2030.

Silicon Valley widely decried President Trump’s decision to initiate the United States’ withdrawal from the Paris accord. And tech firms have been leaders in buying up large amounts of renewable energy to power their data centers and other operations.

"Facebook is neck-and-neck with Google as the biggest buyer," said Kyle Harrison, who tracks renewable energy purchases at Bloomberg New Energy Finance. "The sheer magnitude of their deals is achievement in and of itself."

Others argued that Facebook’s climate record is not as impressive as it might appear.

Where other technology firms have become increasingly vocal in support of climate policy in recent years, Facebook has been quiet. It is a member of the We Are Still In coalition, which favors the United States staying in the Paris Agreement, and has supported legislation to that effect on Capitol Hill. But many climate activists view support for the Paris Agreement as the bare minimum in the fight to curb emissions.

Facebook is not a member of the Climate Leadership Council, the corporate initiative advocating for a carbon tax that counts IBM and Microsoft among its members. Nor is it a part of the Science Based Targets Initiative, which calls on companies to commit to reducing their emissions at levels in line with the Paris accord, like Amazon and Microsoft.

And it hasn’t engaged in regulatory debates at regional transmission organizations over the rules governing power markets and their use of renewables, as Google and Microsoft have done, said Tyson Slocum, who leads Public Citizen’s energy program.

He reckons it is easy for companies to buy clean electricity today for a simple reason: Wind and solar are dirt-cheap. The average cost of a wind contract in the Electric Reliability Council of Texas, the grid operator covering most of Texas, was $16 per megawatt-hour in 2018, according to Wood Mackenzie, a consulting firm. Average wholesale power prices in ERCOT two years ago were $35 per MWh, according to a report by independent market monitor Potomac Economics.

Having renewable energy contracts does not mean Facebook and other tech companies run solely on wind and solar. They rely on the same electricity grids as the rest of the world. What those power contracts do provide is a buyer for renewable electricity, enabling developers to get financing for their projects and greening the overall supply of electrons in the power system.

"For a company like Facebook, they are able to satisfy a lot of the climate calls for aggressive action on sustainability because doing these big solar and wind deals is actually a great deal. But then getting at policing content, or potentially rejecting content, that becomes a little more difficult. You’re basically turning down money," said Slocum.

"When it comes to dollars and cents, Facebook is chasing profit. On energy procurement, that means buying a lot of big renewables. On content, that means they’re accepting money from climate deniers."

Polling has shown that the public is generally supportive of international climate agreements, but they are not something the average person thinks about on a regular basis, said Andrew Light, a senior fellow at the World Resources Institute and former State Department climate negotiator who worked on the Paris deal.

For years, anti-climate policy groups have exploited Facebook’s lax standards on climate misinformation to introduce a whole new audience to false claims about the Paris Agreement, he said.

"It gets amplified on that platform, it reinforces these false assumptions, and that’s something that’s going to make our jobs harder," Light added.

The proliferation of misinformation on the platform does not negate the progress Facebook has made on renewables, said Moin Syed, an analyst at Sustainalytics, which rates companies on their environmental, social and corporate governance (ESG) performance.

Facebook is hardly the only tech company dealing with misinformation on its platform, he said.

"However, given its outsized influence, Facebook does bear responsibility to proactively manage this issue, and we see the general proliferation of misinformation on its platform as part of its overall ESG risk exposure," Syed said.

Sustainalytics gives Facebook good marks on the environment but rates it a high ESG risk given its performance in areas like business ethics and data privacy and security.

The spread of climate misinformation on the platform is part of a larger problem at Facebook, said Jonas Kron, director of shareholder advocacy at Trillium Asset Management, an ESG investing firm with $3 billion in assets. The platform has similar issues confronting hate speech and illegal commerce, he said.

"The way they have structured their platform is to amplify disagreement in extremes and to not amplify facts and helpful information," Kron said. "In that way, to the extent people are on Facebook getting information about this subject, they are going to get the results of a platform designed to elevate disagreements rather than facts."

He rejected the company’s argument that moderating its content represents an infringement on free speech.