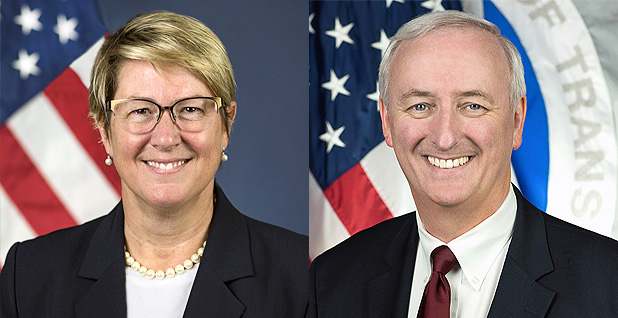 Both are seasoned officials who have completed previous stints in the federal government. And both are leaving their mark on the administration’s proposal for the revised clean car rules, expected later this week.

Deputy Secretary of Transportation Jeffrey Rosen is in the driver’s seat, sources say.

"The person that is driving all this at DOT, no question about it, is Jeff Rosen," said Margo Oge, former head of EPA’s transportation office under President Obama.

Rosen is pushing the controversial proposal because he believes it will withstand a Supreme Court challenge once the court’s makeup is more conservative, people familiar with his thinking told The New York Times.

In 2006, Rosen moved to the White House Office of Management and Budget, where he served as general counsel until 2009. During that period, he was a vocal foe of EPA’s authority to regulate greenhouse gas emissions.

E&E News reported in 2008 that Rosen was one of several Bush officials who pushed the administration to scrap EPA’s well-developed plans to regulate greenhouse gas emissions from motor vehicles, power plants, petroleum refiners and other major polluters (E&E Daily, July 18, 2008).

She currently serves as deputy administrator of NHTSA. In that No. 2 role, she has helped craft the administration’s argument that softening the standards will prevent deaths on the nation’s roads, according to The New York Times.

"We’re supposed to be a relatively apolitical office, and so nobody’s political preferences come through there. I think that was true of Heidi, as it was of everyone else there," he said. "Everything I heard about her work was top-notch."

Correction: A previous version of this article misstated Rosen’s relationship with previous clients.