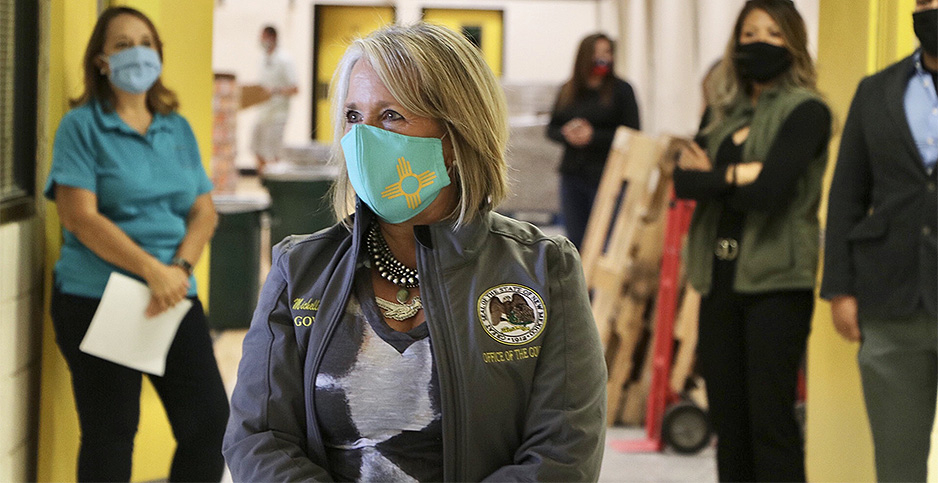 This story was updated Tuesday, July 7.

EPA is poised to stop regulating oil and gas methane directly this month, leaving a gap in how the United States manages the powerful greenhouse gas.

To understand the real-world consequences of this decision, activists point to the energy-rich Permian Basin in the southwestern United States.

There’s mounting evidence that the Permian Basin leaks more methane from oil and gas operations than anywhere else in the country.

But with EPA in retreat, regulation of these methane emissions will be left to Texas and New Mexico — the two states that count the Permian Basin within their borders.

And their attitudes couldn’t be more different.

In New Mexico’s case, state methane rules are on their way. Gov. Michelle Lujan Grisham (D) has pledged that her administration will promulgate nation-leading regulations by the end of this year. The state’s environmental agency already has collected advice from a panel of industry and environmental experts on how to control methane, and a draft rule is due out this summer.

The state currently has seven oil- and gas-producing counties that are close to exceeding EPA standards for ambient air quality, Hayden noted. Therefore, she said, the coming methane rule "is necessary to ensure New Mexico will continue to meet the federal health-based standard for ozone."

And that means operators in the nation’s most prolific oil state soon could be free to vent almost unlimited methane, which has 25 times as much global warming potential as carbon dioxide over a century.

Since 2016, EPA has regulated leaked natural gas from new oil and gas sources across the country.

But a final rule now at the White House and due for release this month would replace that with a much more limited standard that doesn’t control methane directly.

"New Mexico’s moving forward with strong and robust methane rules — it’s going to happen," said Colin Leyden, director of regulatory and legislative affairs for the Environmental Defense Fund. "Texas only has the federal regulations for managing methane, and if those go away, there will be no methane regulations in Texas."

That’s a problem, greens say, because most of the Permian’s production is in Texas. And there’s ample data to suggest the Permian spews more methane than any other U.S. oil field, and twice as much as shown in EPA’s greenhouse gas inventory, which is not based on direct measurements.

One study, published in April by EDF and researchers at Harvard University, the Georgia Institute of Technology and the SRON Netherlands Institute for Space Research, employed satellite data and atmospheric modeling to show that the Permian — where more than 30% of U.S. oil is produced — leaks, on average, 3.7% of produced natural gas into the atmosphere. That’s 60% more than the national average. It’s also enough to erase any climate benefit of burning Permian gas instead of coal to make electricity.

But Texas long has resisted regulating methane, at either the state or the federal level.

The Texas Railroad Commission, which regulates the state’s petroleum production, historically has granted broad permission to operators to flare their gas — a practice that greens say is bad for royalty revenues and the environment. Permits to flare excess gas for a limited amount of time are granted routinely, and extensions are given liberally.

The industry has argued that flaring gas is necessary when drilling for oil in the Permian because the oil field lacks pipeline capacity to remove gas from the production site.

Gas in the Permian is captured as a byproduct during oil production, as the region’s infrastructure is built for oil drilling. Flaring converts the methane that is the chief component of gas into carbon, which is less heat-forcing. But when a flare fails to stay lit, it vents methane directly into the atmosphere.

Elizabeth Caldwell of the industry-funded Texans for Natural Gas, which she called a grassroots organization, noted that four pipelines are now in the works that would make it easier for producers to transport that gas to market.

"It looks like infrastructure is on its way," she said.

The takeaway capacity for the four currently planned natural gas pipeline projects out of the Permian totals 10 billion cubic feet per day, and they should be complete by the end of 2023. That should reduce flaring.

But greens say the state should have prohibited drilling unless producers had a plan to capture and transport associated gas instead of venting it into the atmosphere or flaring it.

"If you can’t route gas to market … you’re wasting most of the gas in this well because of the decline of production," said Tom Singer of the Western Environmental Law Center. If pipelines are needed, he said, producers should do what they’ve done in New Mexico during the current industry downturn, which sent oil prices tumbling to levels that made production uneconomical. They should "shut the goddamn thing in and wait until you’ve got a pipeline or prices are up or what have you," Singer said.

Caldwell said that flaring is necessary to ensure worker safety and avoid blowouts. But environmentalists who track Texas production say the Railroad Commission routinely issues permits to flare when capturing gas is inconvenient or too costly for producers — even when a pipeline is available.

Exco Operating Co. successfully applied to the commission in 2017 to burn off gas despite already being attached to a pipeline owned by pipeline company Williams Cos., because it argued it couldn’t afford Williams’ rates. Williams is now suing the commission for approving the application.

"Railroad Commission policy has been to very liberally construe their own rules and allow these exceptions to their own rules," said Cyrus Reed, conservation director of the Sierra Club’s Lone Star Chapter. "And that’s the real issue."

The commission is now eyeing tweaks to the way it grants permits to flare, but it’s unclear how extensive those changes will be. It took comment this spring from industry and other stakeholders, and commission Chairman Wayne Christian has set a timeline of this fall to adopt new guidelines.

Reed Olmstead, director of North American upstream research at IHS Markit, said progress on pipelines and lower levels of production might be behind the commission’s willingness to rethink the way it permits flaring after many years of lax regulation.

"My take is they didn’t see the penalty of venting and flaring to be intense enough to curtail the oil production that generates a lot of revenue for the state," he said.

Now that pipelines are being built that will allow for takeaway, setting slightly tougher rules might not kill the golden goose.

Leyden of EDF said he hopes for an end to routine flaring in West Texas but added that the commission hasn’t indicated a willingness to set strict limits. Even if the changes this fall are an improvement, he said, they won’t be a substitute for methane rules that would bring down the whole industry’s methane footprint.

Meanwhile, there are signs that many within the oil and gas industry are becoming more open to direct methane regulation, at both the state and federal levels. Broadly speaking, larger integrated oil companies have been more receptive to methane regulation than smaller firms.

While other oil majors have issued comments and statements backing direct federal regulation of methane, Chevron Corp. have backed the more limited approach to regulation championed by the American Petroleum Institute. Chevron and ConocoPhillips met with White House and EPA staff last July on API’s proposal to loosen methane restrictions as part of a delegation that also included API lobbyists. But ConocoPhillips told E&ENews that they do back direct methane regulation in the absence of their preferred policy, a carbon price.

In New Mexico, 17 industry representatives from different segments of the petroleum sector took part in a panel the state formed to help guide the rulemaking. The panel also included Singer for WELC and representatives from EDF, the Sierra Club and other stakeholder groups.

Singer said the panel’s work of compiling recommendations for the state agency was technical, not political. The industry representatives seemed to accept that a methane regulation was on its way.

Robert McEntyre, a spokesman for the New Mexico Oil and Gas Association, said its members who participated in the advisory panel asked for regulatory flexibility. But he said they didn’t ask to avoid regulation.

"This is a unique moment in terms of there being it has the attention from regulatory agencies. It’s getting the attention and the priority from the governor’s office," he said. He added that the industry also is looking for ways to rein in methane emissions.

"So I would say you have a convergence of priorities around this issue that maybe we just didn’t see previously," he said.

Many of the Permian Basin’s top performers on methane, like Pioneer Natural Resources Co., have advocated for industrywide regulation. While the average flaring rate for producers in the Permian is 3.7%, according to a report compiled by the consultancy GaffneyCline on behalf of EDF, Pioneer’s is 0.8%.

"The optimum result would be reasonable regulation that would incentivize early action," stated the Texas-based company.

Andrew Logan, senior director for oil and gas at the investor group Ceres, said companies like Pioneer want to raise the bar for the whole industry to preserve public acceptance of oil and gas production.

Energy companies have launched a slate of voluntary initiatives in response to demands that they take more seriously the threat of climate change. Some companies and lobby groups like API and the Independent Petroleum Association of America have insisted these voluntary efforts are enough to rein in methane when coupled with scaled-back regulations like EPA’s coming rule for volatile organic compounds.

But Camilla Feibelman, director of the Rio Grande Chapter of the Sierra Club, said the industry has proved it won’t limit pollution voluntarily.

"Our sense is that strong federal rules make good neighbors out of industry. And without those rules, whether they be state-level or federal-level, communities are exposed," she said. "The government’s job is to protect its people, and that’s what we’re asking of the EPA and of our state government in the creation of methane rules."