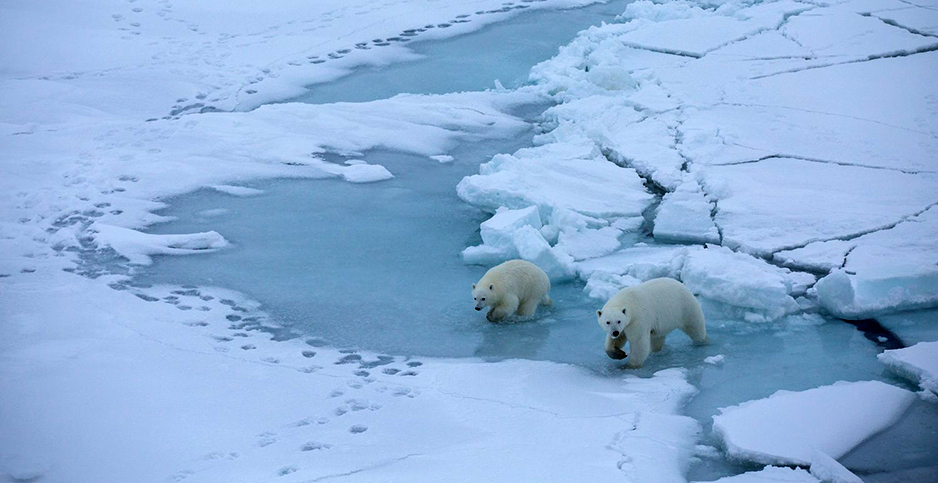 A polar bear and her cub passed close to the Polarstern, a German icebreaker that's on a yearlong expedition in the Arctic. Esther Horvath/@MOSAiCArctic/Twitter

ON BOARD THE AKADEMIK FEDOROV, Arctic Ocean — Polar bears are some of the most fearsome predators on the Arctic landscape. They may also be the nosiest.

For the past few days, a mother and cub have been poking around the Polarstern, the MOSAiC Expedition’s primary research vessel, forcing expedition crew to wait inside the ship until they’ve left the area. Scientists on board are setting up their main research camp on the surrounding ice, working against the clock as the onset of the long winter darkness creeps closer.

The bears first appeared about two weeks ago — a handsome mama and a chubby baby, maybe 6 months old, nosing around the front end of the Polarstern in the gray afternoon sun.

A few days later, they visited nearby Russian support vessel the Akademik Fedorov by moonlight, appearing in the glow of the ship’s lights around 1 a.m. As they crept in close to the frozen hull, crew and expedition participants spilled onto the front deck to marvel at the ghostly pair. (Some observers made the mistake of tossing scraps of meat over the railings, a major safety violation. First thing the next morning, the chief officer’s voice crackled across the intercom reminding the ship’s occupants not to feed the bears.)

Since then, they’ve been a frequent fixture on the ice around the Polarstern.

It’s been a moderate distraction, according to scientists on board — polar bears can knock several hours out of a workday if they prove difficult to scare away. Sometimes it’s necessary to chase them off with one of the ship’s helicopters, an additional time sap.

But it’s not unheard of in Arctic research.

"Polar bears have been around but that is just part of the deal here," MOSAiC Expedition co-lead Matt Shupe said in a WhatsApp message to E&E News from the Polarstern. "It slowed down a bit of work on a couple days but not too much impact. They are cute."

Researchers on the Polarstern have faced more pressing challenges in the last week.

The ship has recently moored itself to a large ice floe in the central Arctic Ocean, which will serve as its home base and main science station for the next year. Researchers have been busy setting up a complex research camp on the ice — putting out power lines, constructing roads and deploying large instruments and data-collecting towers around the floe.

But the floe’s unusual landscape has made the process more challenging than expected. The part of the floe where the ice is thickest, and therefore safest to work on, is also the roughest — covered in steep ridges that make transport by snowmobile difficult and slow.

The uneven topography has also forced expedition leaders to reimagine some of their original design for the ice camp, meaning more time spent searching for suitable places to set up instruments or conduct certain types of research. And the floe has begun to sprout new cracks in the ice as the work continues, forcing scientists to move some of their equipment.

"The installation is not much like we expected, but that is often the case on the Arctic," said Shupe by WhatsApp. "You have to expect the unexpected."

But despite the delays, he said, most of the setup is nearly complete.

Within a few weeks, the central Arctic will be completely dark for the winter, the period referred to as "polar night." The sun already no longer breaks the horizon, and the few hours of light each day takes the form of a hazy blue twilight.

Meanwhile, temperatures are steadily dropping, and the winter ice cover is growing thicker. That’s good news for the Polarstern, which will freeze into place and spend the next year drifting across the Arctic Ocean with the sea ice.

But it’s an increasing concern for the Akademik Fedorov. Although it’s technically the larger and faster ship, the Russian research vessel isn’t actually classified as an icebreaker. And the ship has recently given much of its extra fuel and most of its cargo to the Polarstern, meaning it’s lighter than it was on the journey in.

"For this reason, we cannot stay in this area forever," the Akademik Fedorov’s cruise leader and chief scientist, Thomas Krumpen, said in a recent media briefing. "Because if we stay too long, we may end up being frozen in."

So as the Polarstern finalizes its construction of the ice camp and the MOSAiC mission begins its long drift across the sea, the Akademik Fedorov is preparing to wrap up its end of the mission. In a few more days, the ship will retreat to the edge of the Arctic sea ice cover, and from there it will begin the journey back to its launching point in Tromsø, Norway.

For now, the twinkling lights of the Polarstern are still visible in the distance from the ship’s deck. Between the two vessels, a vast expanse of rugged ice shines pale blue in the polar twilight.

Somewhere on the landscape, a pair of polar bears are likely keeping watch.