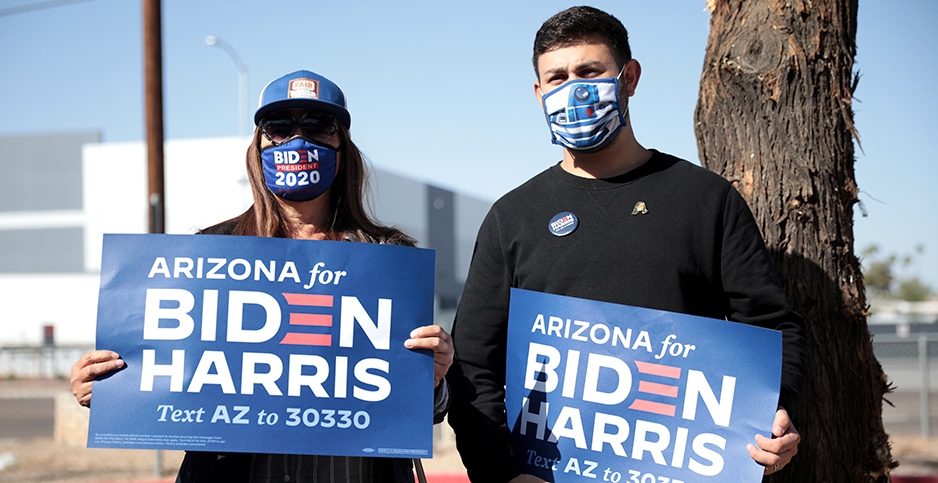 Pollsters who queried likely voters in Arizona and Florida in late October about climate change revealed a gap that could help explain one of the most intriguing results from Election Day.

The states’ residents view their climate risks differently. And their choice for president also diverged.

When pollsters for a New York Times/Siena College survey asked Arizona voters to rate their concern about rising temperatures from global warming, 34% said they were very worried.

But when they asked Floridians about sea-level rise and warming, only 24% of respondents said they were very worried.

The difference might shed light on two curious aspects in the razor-thin presidential race.

Arizona gave its 11 electoral votes to Democratic nominee Joe Biden, according to preliminary results, and sent Democrat Mark Kelly to the U.S. Senate to replace Republican Sen. Martha McSally. Biden would become only the second Democratic presidential candidate to win Arizona since 1952 if the preliminary returns stand.

Both Biden and Kelly, a former astronaut, vowed during their campaigns to increase federal action to curtail climate change.

Florida gave its 29 electoral votes to President Trump, who rejects climate science, and replaced two Democratic House members who had voiced concern about the issue. Trump won Florida by nearly 400,000 votes — roughly three times the size of his victory in the state four years ago — according to preliminary returns.

The election outcome and the New York Times/Siena College poll reflect in part how climate change has become increasingly important in Arizona as the state faces record heat, while Florida voters are not so likely to be swayed by a candidate’s position on the issue, analysts said.

"Over the last few years, we have seen an increase in the intensity of concern about climate change," Kilar said, noting that the survey was taken before Arizona experienced this year’s record heat waves that saw the temperature in Phoenix exceed 100 degrees Fahrenheit on 144 separate days.

Kilar and other analysts said it is difficult to know how much climate change influenced voter choice, particularly in a year dominated by concern about the pandemic and its economic repercussions.

"I think it [climate change] enters into their decision, but I can’t say that was the dominant factor," said Don Levy, director of the Siena College Research Institute.

Climate change may be a greater concern in Arizona than in Florida because heat affects a large share of the state population and was a major issue in recent months, Levy said. In Florida, many people live away from the coast in areas such as Orlando that aren’t directly affected or threatened by sea-level rise.

Residents in the Miami-Dade County area were far more concerned about climate change and rising oceans than people in the rest of the state, the poll found. In Arizona, people in all parts of the state had significant concern about rising temperatures.

In both states, Democrats expressed much more concern about climate change than Republicans.

"Arizona had a tough year. They’re more sensitized to events in California and the whole West Coast," Levy said, referring to wildfires that have burned a record number of acres in California and Oregon this year. "That makes news far more in Arizona than in the rest of the country. And this wasn’t the worst hurricane season that we’ve had in Florida."

Kelly, the Senate candidate, walked a careful line on climate change by supporting federal action but opposing the Green New Deal. His NASA background may have conveyed a pro-climate message.

"The guy was an astronaut, so you might tend to think he has a different perspective at least on the life of the planet," Levy said. "Given this high level of concern [about climate change in Arizona], it could have been one of the factors that led to his win."

McSally was especially cautious when talking about the issue, telling an Arizona newspaper in September that the environment and climate "are changing, and there is likely a human element to it."

In Florida, by contrast, the two Republicans who unseated Democratic House members this week spoke openly about climate change and the danger of rising oceans. The two districts that changed parties are in coastal parts of Miami-Dade County that are highly vulnerable to sea-level rise.

"Republicans are different here because Republicans can see the water rising," said University of South Florida communications professor Joshua Scacco. "A climate message will probably be more bipartisan in South Florida than in other areas of Florida because they have sunny-day flooding."

Giménez "has been one of the more progressive Republicans on climate," Scacco said.

"They vote for the environment every single time," Moncrief said.

But Trump and other Republicans won in Florida this year because they ran "fearmongering" advertisements linking Democrats with social unrest and nefarious government, he said.

"They were catering to this fear of socialism, this fear of fascism that is very front and center in South Florida in the Cuban community and Venezuelan community," Moncrief said.

Trump lost the three populous and heavily Democratic South Florida counties of Miami-Dade, Broward and Palm Beach, but by much less than he lost the area in 2016, according to early election results.

Pre-election polls had shown Florida was a toss-up between Biden and Trump.

"I was hoping that Florida would deliver for a pro-climate candidate," Moncrief said, referring to Biden. "To see Florida falter again is heartbreaking."