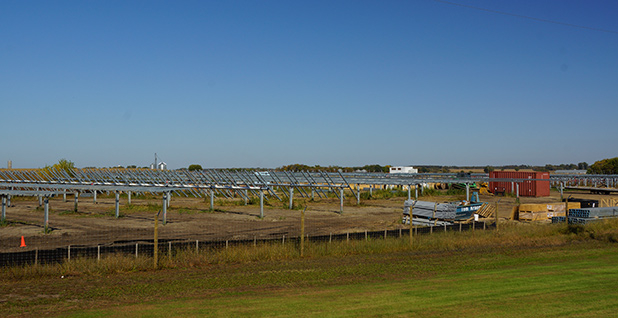 The Minneapolis-based utility notified its preference to form a separate North Dakota distribution utility — a process it warned that would take several years and cost millions of dollars.

North Dakota regulators have contracted with a consulting firm to help analyze the proposal as well as a number of other Xcel Energy projects, and they’ve referred the case to an administrative law judge.

The state Public Service Commission’s advocacy staff is expected to submit testimony by Oct. 1, under a procedural schedule agreed to by the parties. A decision is expected by mid-2018.

Across the state line in Minnesota, nothing has been formally proposed yet. The Public Utilities Commission spent nearly two hours during a meeting last week discussing what steps it should take as things unfold. Ultimately, they decided to monitor the process in North Dakota.

But in a filing with the North Dakota PSC, the utility explained that it’s seeking to split utility operations because of "unbridgeable disagreements regarding assessment of resource decisions" as the utility system evolves.

Xcel added that "the financial impacts of managing interjurisdictional disagreements have become material."

At the core of the disagreements between Minnesota and North Dakota are the choice of fuels used to power the states.

Minnesota law requires Xcel to get nearly a third of the electricity sold in the state from renewable resources, with specific carve outs for wind energy and utility-scale and community solar projects. And by statute, the PUC must consider the cost of power plant emissions — criteria pollutants and greenhouse gases — when evaluating utility plans to build or retire power plants.

In all, some 1.6 million customers in Minnesota, North Dakota and three other Upper Midwest states are served by Xcel’s Northern States Power Co. However, Minnesota customers make up 75 percent of the utility’s overall load, and Xcel’s 93,000 electric customers represent just 5 percent.

Xcel said policies in Minnesota, where the bulk of its customers reside, are steering utilities toward cleaner energy sources. Those policies generally align with the company’s efforts to decarbonize its generating fleet.

But desire to install more wind, solar and other carbon-free energy isn’t necessarily shared in North Dakota, which has no renewable portfolio standard and is among the largest petroleum and lignite producers in the nation.

Xcel said in its filing that state energy policies began to diverge two decades ago — a gap that has continued to widen in recent years and is reflected in orders by the North Dakota PSC denying Xcel cost recovery for certain renewable energy projects.

One example is Xcel’s Aurora, a 100-megawatt solar project scattered across more than 20 sites in Minnesota (Climatewire, June 1, 2015).

In 2016, North Dakota regulators denied cost recovery for the $250 million project that would help the utility meet a Minnesota solar mandate, saying it wasn’t a least-cost resource for serving North Dakota customers.

Xcel turned to the Minnesota PUC seeking to plug the cost gap and recover costs disallowed in North Dakota. But the company was denied again.

The Minnesota commission said in its order that the Aurora project was approved on the basis that it was cost effective in the context of Xcel’s entire Northern States Power system, which covers parts of five states.

"It is simply not just or reasonable for Xcel’s Minnesota ratepayers to subsidize North Dakota ratepayers’ consumption of solar energy," the PUC said in its order.

As part of its April 2016 Aurora decision, Minnesota regulators directed Xcel to make a filing that outlined options for how to address and resolve jurisdictional cost-allocation disputes.

The North Dakota commission, as part of a rate case settlement a month earlier, also required Xcel to develop a mechanism to "address the issue of divergent state energy policies."

Xcel initially laid out four different alternatives for addressing differences between the states. But in follow-up testimony filed with the North Dakota commission this summer, the utility said a legal separation of utility operations was the preferred option.

"We believe there is a role for solar energy and other emerging technologies on the system. We believe that this path to a cleaner and more nimble fleet is both in the best interests of our customers and consistent with our business plans," Xcel said in the filing. "We appreciate, however, that this path may not be embraced in North Dakota."

The company suggested that disputes over cost allocation will likely continue as its generating fleet undergoes a significant transformation in the coming years.

As part of its "Steel for Fuel" initiative, Xcel is adding 1,550 MW of wind energy to its Upper Midwest system as well as additional solar generation and retiring its largest coal plant in Minnesota — all part of a pledge to cut carbon dioxide emissions by 60 percent by the end of the next decade.

The company said its North Dakota ratepayers get significant value from being part of a large, diverse utility system, including attractive pricing on "everything from tools to steel to wind turbines."

Xcel said it also brings a culture of community service that dates back to the 1920s when the volunteer fire department in Minot, N.D., was made up entirely of utility employees.

But the company said it cannot continue to get squeezed by state energy policy priorities that clash with the policy goals in Minnesota, where the bulk of its electric demand is located.

"We cannot allow five percent of the [Northern States Power] system to retain a veto on resource decisions," the utility said.

As daunting as it may be to combine utility operations as a result of a merger, taking them apart may be even trickier.

Xcel estimates creating a North Dakota operating company will cost several million dollars and require numerous decisions about the structure and size, what assets will be included in rate base, how to ensure sufficient transmission and generation service, and how the company would be managed at a corporate level.

The company estimated that those decisions and approvals from utility commissions in both states and federal regulators could be complete by 2020.