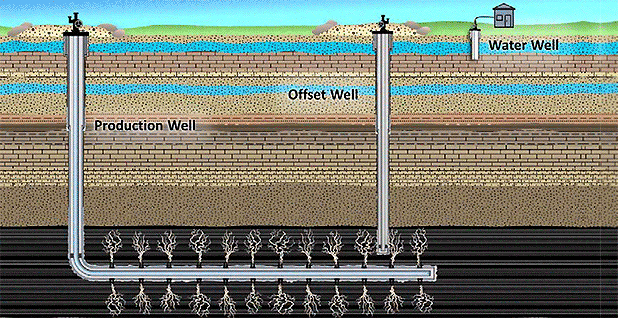 This illustration from a U.S. EPA study shows how hydraulic fracturing fluid from a horizontal well can flood, or "hit," a vertical well (not to scale). EPA

OKARCHE, Okla. — A unique set of rules has evolved in this oil-driven state that allows two companies to pump oil from the same patch of dirt, sometimes in the same formation.

But it’s not going smoothly. Instead, it has left a trail of older wells damaged by "frack hits," flummoxed state regulators and started a civil war within the state’s singularly powerful oil industry.

The fallout has roiled a state where the small wildcatter is as revered as the family farmer, and aging pumpjacks dot the landscape like tobacco barns in the South. Most of those wells were drilled back when wells went one direction — straight down. And many decades-old wells still pump a few barrels a week.

But state leaders have allowed large independent producers, like Newfield Exploration Co., Devon Energy Corp. and Chesapeake Energy Corp., to drill long horizontal wells for up to 2 miles through those old oil fields.

Small producers complain the larger companies are siphoning off their oil and damaging their older, vertical wells with high-pressure hydraulic fracturing. They say state officials are allowing it, even encouraging it.

"They know they’re going to ruin your well and they don’t care," said Mike Cantrell, who helped lead an exodus of small drillers from the state’s largest oil industry trade group earlier this year. "This wouldn’t happen in Colorado, Texas or North Dakota."

State oil and gas regulators say they’ve confirmed 20 such incidents, which sometimes lead to surface spills. Some vertical producers say frack hits could contaminate groundwater, though regulators say they have no proof of that.

Larger drillers say their smaller rivals are exaggerating the problem. But they say if state rules favor horizontal drillers, it’s because they have the same interests as the state — pumping as much oil out of the ground as quickly and efficiently as possible. Legislators and regulators at the Oklahoma Corporation Commission (OCC), they say, are simply changing with the times.

None of the three elected commissioners agreed to an interview for this report. But a commission spokesman said the agency is just trying to implement what lawmakers have handed to them.

"It’s important to understand we didn’t make this law," said OCC spokesman Matt Skinner. "We have to follow the law that was passed by the Legislature and signed by the governor."

While Oklahoma’s situation appears to be unique, the clash shows that problems that can result from new drilling in old oil fields, and shows the shale boom has created a growing gap between large and small independent producers.

‘An art and a science’

In Okarche, about an hour west of Oklahoma City, the Cactus 142 rig is tunneling a 9-inch hole about 2 miles under the vast prairie.

The STACK, along with its neighbor play, the SCOOP (a similarly tortuous acronym that stands for "South Central Oklahoma Oil Province"), have led the revival of Oklahoma’s oil industry.

Newfield’s bet on the STACK has made the company, based near Houston in the Woodlands, Texas, the No. 1 oil producer in the state.

Part of that success is the ability to steer the drill bit underground with precision.

"It’s an art and a science," Lloyd Hetrick, Newfield’s operations engineering adviser, said over the roar of the rig. "We can thread a basketball hoop from 2 miles away."

The only well in the path of the CE Frederick is another Newfield well. The Cactus crew will bend — "slide," in oil field jargon — the wellbore around it.

Changes to the law made by the Oklahoma Legislature in 2011 opened the door to companies drilling horizontal wells right through networks of vertical wells in existing oil fields. At first, the changes included only shale layers, where the vintage wells didn’t produce.

But in the past few years, as the large producers bounced back from a price slump, they’ve been more aggressive about drilling horizontally in some of the same formations as verticals. Earlier this year, the Legislature extended the same advantages to non-shale formations.

One small driller likened the changes to a city council permitting a new building to be constructed on top of another person’s building.

"The whole argument boils down to private property rights," said Zack Taylor, who has a small family-run oil company in Seminole and is also a state representative. "You can’t step on someone’s property right to promote development."

Larger drillers say there are protections in place to protect the smaller drillers.

To prevent damage, horizontal wells are supposed to stay at least 600 feet away from vertical wells, although OCC officials can waive the setback. Vertical operators can also buy into the new well.

If they don’t have the money to buy in, they can cut a deal with the operator, or OCC administrative law judges assign fair market value to their interest. The vertical company can keep producing from its well, if it doesn’t get damaged.

If it does get damaged, they say, the vertical driller still has an option — filing a lawsuit.

"It is not the Wild West where the little guy is run over," Hetrick said.

But it sure feels that way to Steve Altman. The petroleum engineer is dealing with a well that has been hit three times. The first was a "bump," Altman said. The second was a "hit." The third was a "smash," collapsing the well’s casing and ruining it.

That well had been producing about 40 barrels of oil a month. With natural gas production thrown in, that added up to $10,000 a month — a rounding error for Newfield, but a tidy sum for Altman and his business partners. And that’s only one of more than two dozen of their wells that have been damaged since 2014.

"I’ve never had a horizontal well nearby that didn’t hit me," Altman said.

Altman, Cantrell and other vertical drillers scoff at the protections cited by large drillers, starting with state officials setting a value on their interests. The guidelines used by OCC administrative law judges are so restrictive, they say they get a fraction of the true value.

"The reddest of red states, and the government sets the price," Cantrell quipped in an interview in Oklahoma City.

The 600-foot setback is cold comfort, they say, since fractures can travel many times farther than that. A Newfield engineer testified in September that frack fluid has been found a mile from where it started. Small drillers say they’ve heard of fracks hitting wells several miles away.

And the larger companies don’t always accept the 600-foot setback because it means less oil. In the September OCC hearing, Newfield argued that unless the setback was waived for several wells, it would wind up leaving nearly $28 million worth of oil and gas in the ground. The judge rejected the waiver request.

But they say they lack the information they need. Often, they learn about frack hits only when they cause a spill at the surface. So the agency recently started collecting information on frack hits, creating a new form for vertical operators to report such incidents.

But those vertical operators say OCC officials should be preventing well bashing before it happens. They say the agency has the authority to keep the horizontal wellbores farther away from verticals in the first place.

"They shouldn’t be permitting those things knowing they’re going to destroy those vertical wells," Cantrell said.

The dispute is tearing away at the state’s long-dominant oil lobbying association — the Oklahoma Independent Petroleum Association, or OIPA.

For years, OIPA was pretty much the only game in town. But during the shale boom, the interests of large and small independent producers started to diverge.

In 2013, an older trade group got a new name — the Oklahoma Oil and Gas Association — and a new executive director, Warmington. Its old incarnation had long represented oil majors such as Exxon Mobil Corp. and BP PLC. Warmington started positioning OKOGA, as it’s called, as the voice of large independents.

Many of the larger companies were active in both groups. But last year, larger companies like Newfield, Devon and Chesapeake quit OIPA, concerned the group was too focused on the interests of small independents.

This spring, Cantrell led an exodus of small producers and formed the Oklahoma Energy Producers Alliance, or OEPA. He said about 15 of the more than 60 board members of OIPA left the board.

What changed is that OIPA had, after many years, endorsed legislation expanding the advantages for horizontal drilling, which then passed narrowly.

To A.J. Ferate, OIPA’s vice president of regulatory affairs, the group was simply keeping up with the times. He says OIPA is still the largest oil industry group in the state, and remains strong.

"It’s only natural for every industry to become more sophisticated over time," Ferate said. "That’s true of oil and gas, too."

But to Cantrell, the shift in position showed the association was no longer representing "the little guy who’s been here forever."

That Cantrell would become the face of opposition to OIPA shows the depth of the political shift in the state. To many, the oilman from Ada, Okla., had embodied the OIPA. He represented the organization as chairman of many board committees and served a term in the 1990s as OIPA president.

In addition to challenging the new legislation for horizontal drillers, OEPA came out against a tax advantage for new wells cherished by the larger companies (Energywire, Sept. 25).

The organizations have traded contemptuous statements for months in press releases and social media posts. But the bitterness hit new heights in late August, when OIPA demanded that Dewey Bartlett resign from its board.

Bartlett, who runs a small oil and gas company, was mayor of Tulsa until 2016. He’s the son of a governor who was a founding member of OIPA. As a former president of OIPA, he has a lifetime membership on its board. But he also became a founding board member of OEPA.

"I’m requesting that you make a decision as to where you want to serve — with OIPA or OEPA — not both," Wigley’s letter said.

Bartlett has not resigned from either.

To some, the infighting is a logical progression for an industry reviving domestic production after years of decline. To others, the "new normal" is dispiriting. But most agree that it means more big fights to come.