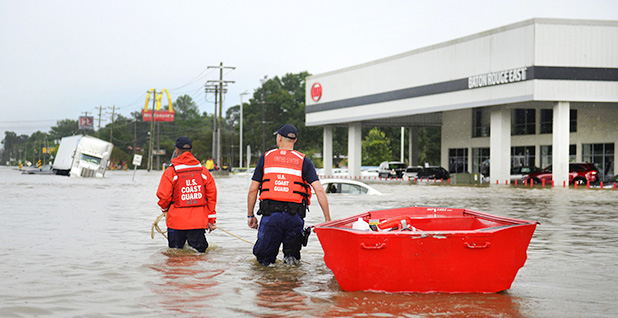 A Supreme Court ruling in a 2012 fight over a flooded Arkansas wildlife refuge could boost the chances of Baton Rouge-area officials hoping for federal compensation for last week’s catastrophic deluge in parishes and towns near Louisiana’s capital.

Walker Mayor Rick Ramsey said last week that he plans to sue on the grounds that the flooding in his city of 6,000 people was caused by a highway divider that served as a dam, blocking the natural flow of stormwater.

A Walker lawsuit, legal experts say, could be helped by the Supreme Court’s 8-0 ruling in Arkansas Game and Fish Commission v. United States, which declared that a one-time flood could be considered a "temporary taking" of property.

"The law has changed fairly significantly in the past couple of years on this," said John Echeverria, a professor at Vermont Law School and an expert in takings law. "In the past, the mayor’s lawsuit would be pretty implausible, but now it’s actually more plausible."

But the legal standard for a Walker suit under a temporary takings claim is unclear, given that the Supreme Court ruling is just 4 years old. A lawsuit could test how broadly that ruling applies, Echeverria said.

"This is an extrapolation of the Arkansas Game and Fish litigation, and it may be a test of how far that precedent can be taken," he said.

In the 2012 case, Arkansas game managers argued that the Army Corps of Engineers’ management regime for a dam along the Black River resulted in new and different flooding in the Dave Donaldson Black River Wildlife Management Area. The flooding, the commission said, damaged the refuge’s timber resources (Greenwire, Sept. 26, 2012).

The commission sued, arguing that temporary flooding was a taking of property and that it was entitled to compensation.

Lower courts dismissed the case on the grounds that an entity can’t recover compensation under the takings clause for a single flood. But the Supreme Court disagreed, finding "government-induced flooding temporary in duration gains no automatic exemption from Takings Clause inspection."

It remains to be seen how much impact the 2012 decision will have.

"The thing to understand about that decision is that it doesn’t say that all flooding events are necessarily temporary takings," said Robert Verchick, an environmental and disaster law professor at Loyola University New Orleans. "All it says is that in certain circumstances it’s possible. The case goes on to say that it really depends on the context and all of the surrounding effects."

The navigation channel, Braden wrote, created a "ticking time bomb" that caused massive amounts of damage to landowners in St. Bernard Parish, La., during the hurricane. The Obama administration has appealed the ruling.

"If this case is upheld on appeal, it means that the federal government is going to be accountable for the failure of the levees after Hurricane Katrina," Verchick said. "It could expose the government to billion of dollars of damages."

The circumstances in Walker are different from either of the two cases, and it’s impossible yet to know what facts the city may bring to light in litigation.

Walker is in Livingston Parish, about 20 miles east of Baton Rouge. During the 39-hour deluge two weeks ago, about 80 percent of its homes were damaged, Mayor Ramsey told local news outlets last week.

He blamed a 6-foot wall constructed along Interstate 12 for preventing water from draining out.

"There is no doubt this is a dam, and that dam raised 5 to 6 feet of water in our area," Ramsey told KLFY News in Lafayette, La. "And I want someone to take responsibility for it. I want them to acknowledge it."

It’s unclear yet which state or federal agencies would be targeted by a Walker lawsuit, but the city would likely target transportation departments.

In a lawsuit modeled after the Arkansas Game and Fish Commission and the St. Bernard Parish cases, Walker would likely have to show that the flooding was intentional or foreseeable, Echeverria said.

"The question is, did the state and federal highway officials proceed with complete knowledge of the hazard they were creating and the risk of flooding, or is this an unintended accidental consequence?" Echeverria said. "The government will argue that it’s an accident and they can’t be held liable for a temporary taking."

‘Much bigger’ than Walker

Aside from a takings suit, Walker would have few other legal avenues to receive compensation for the flooding.

The odds are against the city in federal torts claims of negligence because the government has broad immunity in such cases.

Walker may have a better chance of winning a negligence suit against the state, where the court is "very plaintiff-friendly," said Edward Richards, a law professor at Louisiana State University.

"If you’re suing the state for negligently designing a highway or some other public works project, if you’re not dealing with federal law, then those can be quite successful lawsuits," he said.

But whether Walker would be able to collect money from the state if it’s successful is another matter, given that Louisiana lawmakers would have to appropriate the money.

Richards noted the Louisiana Legislature has yet to appropriate money to pay the full award for a case in which the state was found liable for flooding in Tangipahoa Parish due to the construction of an I-12 bridge.

"When you’re in a state court that doesn’t provide any way to collect judgments other than appropriations, you really don’t want a huge verdict against Louisiana because you’ll never collect it," Richards said.

When Walker "begins to think about this and work it through, they’re going to find some angle to sue the federal government," he added.

These tricky legal issues that Walker will confront if it moves forward with litigation will be forced into the spotlight more and more due to climate change, said Verchick, who previously served in the Obama administration, where he helped shape U.S. EPA’s climate strategy.

While the link between climate change and Louisiana’s flood disaster is yet unclear, the frequency and intensity of heavy rainfall have increased around the world (ClimateWire, Aug. 16).

"This issue is much bigger than the city of Walker," Verchick said. "This issue really is about how the law is going to be able to deal with more and more of these destructive events that we know are going to be coming because of climate change."