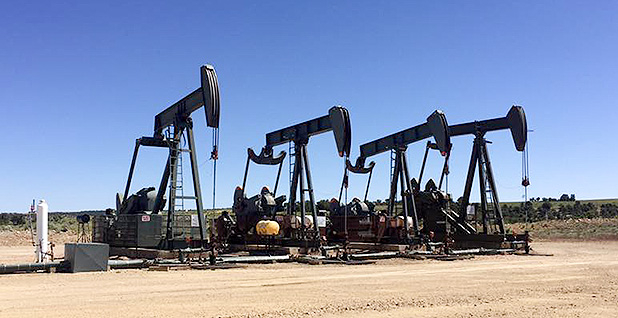 The 2016 oil and gas legal landscape was defined by sprawling administrative battles with all sides scrambling for a piece of the action.

As litigation over the Obama administration’s hydraulic fracturing rule crescendoed, other federal actions set the stage for new courtroom challenges. From cracking down on methane emissions to moving forward with controversial lease sales, the administration kept busy, and industry and environmental lawyers took notice.

The year saw the launch of two dueling lawsuits over how the government leases public lands for oil and gas development. Spoiler: Both sides are unhappy about the process.

Meanwhile, protection of places with special importance to the environmental community or native tribes remained a hot-button issue in many courtrooms — most significantly in the bare-knuckle fight over the Dakota Access pipeline.

An eyebrow-raising issue in early 2016 was the surprise verdict in the long-running litigation over drinking water contamination in Dimock, Pa. A jury found Cabot Oil & Gas Corp. responsible for two families’ fouled water, a decision the company is now challenging.

Another vintage fracking issue — local control — dominated the dockets in previous years but slowed significantly in 2016. Still, the issue cropped up in several cases and remains pending in at least one federal appellate court.

And with the new administration comes a large dose of unpredictability for all types of oil and gas litigation. Industry lawyers are still not sure quite what to expect from President-elect Donald Trump, so they plan to stay guarded as his term kicks off.

One thing is certain: Environmental lawyers will be busy. With the new administration showing favor to industry, experts expect more environmental challenges to federal actions, with industry teaming up more often with government agencies.

"Contributions to environmental groups have gone up substantially since the election, and I would expect that litigation, particularly against government agencies and government decisions, would increase starting next year after the Trump admin takes over," said Arnold & Porter attorney Matthew Douglas, who tracks oil and gas litigation nationwide. "I would expect to see a lot more than we’ve seen over the past eight years."

By far the most significant legal development in the oil and gas world this year was a federal court’s June ruling that Interior’s Bureau of Land Management lacks authority over fracking.

The decision came more than a year after industry groups, four Western states and one American Indian tribe sued over BLM’s fracking rule, calling it a regulatory overreach. The U.S. District Court for the District of Wyoming agreed, adopting a highly disputed interpretation of federal laws that purportedly remove fracking from Interior’s jurisdiction.

Earthjustice attorney Mike Freeman, who is helping to appeal the decision at the 10th U.S. Circuit Court of Appeals, called the lower court’s ruling a mistake with potentially sweeping impacts.

"This court’s decision doesn’t just eliminate the fracking rule," he said. "If you follow this court’s reasoning, BLM can’t manage most of what it currently manages with regard to oil and gas development on public lands. The decision disregards the intent of Congress and a century of case law."

Douglas agreed that the scope of Judge Scott Skavdahl’s decision came as a bit of a surprise.

"The way he focused it on the lack of BLM having any authority over the day-to-day drilling operations that relate to fracking was broader than I anticipated," he said.

But, he added, the agency was taking a "giant leap" into uncharted waters, so unpredictable legal outcomes may come with the territory.

The ruling was a major victory for states and industry groups that have opposed the rule since its inception and was a relief to oil and gas companies downtrodden by the oil price slump. Indeed, at an energy law conference in July, the fracking rule decision served as a rare bright spot in despairing conversations about depressed markets (Energywire, July 25).

But the fracking rule wasn’t the only regulatory update the Obama administration had planned for the oil and gas industry.

"We’re seeing the completion of several years of reform efforts by the current administration," Freeman said.

Next on the administration’s agenda was a crackdown on methane emissions from the industry. Tightened regulations came from both BLM and U.S. EPA this year, and both were followed by lawsuits from states and industry groups.

Mark Barron, a BakerHostetler attorney representing industry groups in the fracking case, said the challenges are all a response to "extensive regulatory overreach," something industry hopes to see less of under the next administration.

"People are predicting that they’re actually going to get back to the business of developing oil and gas," he said.

The regulatory lawsuits are set to continue well into next year, and it’s unclear how or whether the new administration plans to defend the rules (Energywire, Nov. 8).

To lease or not to lease?

Another set of high-stakes litigation from 2016 centers on the federal government’s leasing practices for oil and gas on public lands.

In August, the influential industry group Western Energy Alliance sued the Obama administration, alleging it violated the Mineral Leasing Act by bowing to environmental pressure and failing to hold quarterly lease sales. Green groups are pushing for a seat in the courtroom for the lawsuit.

Environmentalists were also ready with their own challenge to federal leasing. Just two weeks after the industry lawsuit, Santa Fe, N.M.-based WildEarth Guardians, which spearheaded the "keep it in the ground" movement, filed a sweeping challenge to leasing practices.

WildEarth Guardians, joined by Physicians for Social Responsibility, says BLM has ignored the climate impacts of hundreds of thousands of acres of leases since early 2015. The groups slammed the agency’s leasing practices as both "illegal" and "immoral."

The lawsuit is an ambitious one. It asks a federal district court to freeze all action on hundreds of oil and gas leases until BLM performs an in-depth analysis of climate impacts from development on public lands (Energywire, Aug. 26).

Barron, the industry lawyer, said a win for environmentalists in the case would have far-reaching impacts.

"That is the most important environmental case in the country," he said. "It deals with boilerplate language that every federal agency uses for every federal action."

If BLM loses the case, he said, every resource management plan, master development plan, unit approval and flaring sundry — not to mention approvals for other types of energy development — would be subject to a new scrutiny.

"If it’s inadequate in those leases, it would be an easy extension for them to then go ahead and challenge essentially every federal approval of any kind — oil and gas to wind to solar to any commercial use of public lands anywhere on the basis that the climate change [analysis] is inadequate," he said.

Meanwhile, in the Pacific, a narrower leasing battle is playing out. There, environmental groups and the state of California want Interior’s Bureau of Ocean Energy Management and Bureau of Safety and Environmental Enforcement to halt offshore oil and gas leasing and instead perform an environmental impact statement for fracking in the ocean.

The Pacific fracking battle began years ago and is in its second round of litigation. After environmental groups sued in 2014 and 2015 over inadequate environmental review, the administration briefly halted new permitting and performed an environmental analysis. That analysis found various impacts from offshore development but concluded that fracking would have no significant impact.

Now, those findings are under attack by the same environmental groups that launched the first legal attack: the Center for Biological Diversity and Environmental Defense Center. Earlier this week, California Attorney General Kamala Harris (D), who is heading to the Senate next year, joined the battle (Energywire, Dec. 20).

Finally, much of the year’s litigation focused on site-specific battles, in which advocates pushed for more protection in areas they consider too special to drill.

The most high-profile case, of course, was the Dakota Access pipeline, which would cross a half-mile from the Standing Rock Indian Reservation in North Dakota. The massive pushback on the pipeline stemmed from general dissatisfaction over the government’s treatment of tribes, as well as the more immediate concern that the project would disturb tribal burial grounds and potentially pollute the Missouri River.

Courtroom gymnastics were a key element of the movement against the pipeline, but the major action was on the ground in North Dakota and in the halls of the three federal agencies handling the issue: Interior, Justice and the Army.

Though the Obama administration announced early this month that it would not grant the final easement needed to complete the oil pipeline, the fight is far from over, as the Trump administration has voiced support for the project.

Other battles over development in special places have garnered fewer headlines but just as much local conflict.

In Montana, Interior Secretary Sally Jewell made waves when she decided to cancel a long-contested oil and gas lease in an area considered sacred to the Blackfeet Nation. Interior has also canceled leases this year in the Wyoming Range and Colorado’s Thompson Divide, and has significantly scaled back plans for development on Colorado’s Roan Plateau.

Freeman, the Earthjustice lawyer, said the cancellations are part of an Obama administration effort to rethink various drilling plans.

"What it’s tried to do over the last eight years is take a more balanced approach to oil and gas development and recognize that even if they want to proceed with oil and gas on public lands, there are areas where it’s just not appropriate," he said.

He’s keeping his fingers crossed that Trump’s team will take note of the opposition that followed leasing plans in those areas.

"We hope that the new administration will learn from some of the lessons from the Roan and the Thompson Divide and other cases like that," he said.

Industry lawyers, on the other hand, are worried the lease cancellations set a negative precedent that has emboldened environmental groups.

Barron argued that such cancellations make drillers reluctant to work on federal lands in the first place, and Kathleen Sgamma, head of Western Energy Alliance, argued that lease cancellations violate the property rights of the companies that obtained the leases fairly.

The lease cancellation in Montana is now under review in federal court.