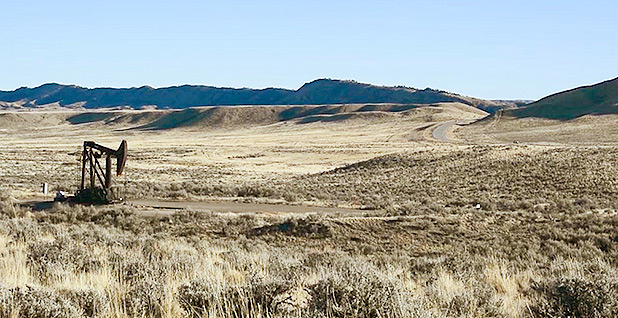 2017 was another busy year in oil and gas litigation. Bureau of Land Management Wyoming/Flickr

It’s been a litigious year in the oil and gas regulatory world, to say the least.

Battles between the Trump administration and its detractors dominated court dockets across the country. Top on the president’s agenda over the past 12 months: regulatory rollbacks that sparked a legal frenzy.

Environmental groups boasted dozens of new lawsuits against agencies in 2017, while the oil and gas industry dusted off its old playbook for sympathetic leadership in Washington.

"It’s hard to keep up with the drama of these things," said Kate Konschnik, who heads the climate and energy program at Duke University’s Nicholas Institute for Environmental Policy Solutions.

Indeed, former President Obama’s attempts to cut methane emissions, update royalties rules, and introduce new safety measures for oil and gas production have been targeted by a series of rollback efforts — some successful, some not.

Rivaling the deregulatory effort in complexity is the ballooning litigation over oil and gas infrastructure across the country. Courts are fielding countless complaints over pipeline build-outs, and litigants are making slow but notable progress in their efforts to force agencies to more closely consider impacts to the environment and property owners.

Meanwhile, many public lands skirmishes among the government, industry and environmentalists that started before President Trump took office have plodded ahead in the courts this year with heightened acrimony.

Big holdover battles include fights over how and when the government leases public lands for development, and whether certain areas should be kept off-limits.

Finally, a few sleeper cases are moving through the courts, drawing little attention now but promising high-stakes action in the coming year.

The Trump administration’s efforts to slash regulations seen as stifling fossil fuel development overshadowed most other legal fights affecting oil and gas in 2017.

The biggest battles centered on rule rollbacks for methane emissions, hydraulic fracturing and royalty reform. The deregulatory efforts played out in stages, prompting layers of litigation along the way.

Environmentalists count their defense of Obama-era methane restrictions among their biggest victories of the year. Coalitions of environmental groups and supportive states were successful in defeating two preliminary attempts from the Trump administration to freeze or delay measures.

"We’ve been pleased to see courts rejecting Trump administration efforts to stay or repeal rules without going through the process they have to follow and defend their decisions to reverse these reasonable rules," Earthjustice attorney Mike Freeman said.

After U.S. EPA used a Clean Air Act reconsideration process to sideline standards for new oil and gas operations, the U.S. Court of Appeals for the District of Columbia Circuit rebuked the agency and reinstated the requirements. EPA is now going through a longer public process to rethink the rule.

Meanwhile, a district court in California reversed BLM’s attempt to use a provision of the Administrative Procedure Act — Section 705 — to stall measures to cut methane waste on public and tribal lands.

The decision mirrored a previous ruling from that court that struck down the Interior Department’s similar effort to sideline an Obama-era fossil fuels valuation rule using APA 705.

BakerHostetler attorney Mark Barron, who represents the oil and gas industry in various litigation, said the agency’s losses on APA 705 are the most significant rulings of the year.

"Not necessarily because the rules that they address are so critical," he said, "but I think that the court took a tool out of agencies’ toolboxes."

Barron supported the application of APA 705 for the rules, arguing that it’s important for Interior to have the flexibility to freeze a rule after challengers have filed suit and the agency sees merit in their claims.

"Let’s say somebody files a claim like a week after a rule goes into effect, where the agency says: ‘You know what, that is a good point. We didn’t think of that. We should put this plan on hold while the litigation is pending,’" he said.

Interior appealed the methane decision to the 9th U.S. Circuit Court of Appeals. Meanwhile, it has finalized a broader suspension of the rule, which sparked new lawsuits from environmentalists and states just this week.

Another big and confusing legal fight this year focused on Obama’s 2015 rule for fracking on public and tribal lands. The long-running litigation took a sharp turn in the spring when the Trump administration announced plans to review the regulation.

Duke’s Konschnik called it one of the most interesting cases of the year, highlighting "extreme views" from some Western states and other critics about the federal government’s authority to regulate federal lands.

"That one encapsulates this real push to either privatize public lands or to really minimize the government’s oversight of the use of those lands," she said.

The Trump administration has walked a fine line, backing away from the Obama rule but maintaining its position that BLM has authority to regulate fracking if it wants to.

In the fall, the 10th U.S. Circuit Court of Appeals made the case even murkier with a procedural ruling that sidestepped the meat of the litigation but put the long-frozen regulation back in play.

The Trump administration is expected to finalize its repeal of the fracking rule next month, and — you guessed it — a new round of litigation will follow.

The year in oil and gas litigation was also dominated by midstream battles over pipelines.

For once, news about oil pipelines largely took a back seat to gas pipeline fights. As natural gas infrastructure spreads, opponents are becoming more sophisticated and creative in their opposition.

The result? Still not a lot of wins for pipeline opponents, but a growing understanding by FERC and pipeline builders that every step in the approval process will face scrutiny.

Gas pipeline opponents’ biggest win came in a D.C. Circuit ruling in August that required regulators to more closely consider the climate impacts of a project in the Southeast.

The Dakota Access pipeline, for example, has been the subject of several significant court decisions in 2017. Federal judges earlier this year allowed the pipeline to be completed and stay in service but also cracked down on regulators.

In June, the U.S. District Court for the District of Columbia ruled that the Army Corps of Engineers had flubbed three areas of its environmental review for the project. Earlier this month, the court ordered pipeline backer Energy Transfer Partners LP to comply with added safety conditions while the Army Corps fixes its review.

Litigation over the similarly divisive Keystone XL pipeline is about to heat up. A district court in Montana last month rejected the Trump administration’s requests to dismiss environmental challenges to the presidential approval of the project.

That means the State Department’s environmental review will likely go under the microscope in the courtroom. Groups are also planning to challenge a new route approved by Nebraska regulators in November.

In addition to the battles affecting public lands regulations, court dockets have featured a steady stream of litigation over oil and gas leasing.

"Obviously it’s been a dramatic year in public lands litigation," Center for Biological Diversity attorney Michael Saul said. "Although in some ways, the everyday flow of leasing and permitting actions and ensuing litigation has sort of remained the same, the big difference is obviously you see an administration totally and explicitly committed to fossil fuel development on public lands at all costs and dismantling every possible impediment to that."

The oil and gas industry, of course, frames it differently, celebrating the steady fall of what drillers consider to be red tape hamstringing development.

Some of 2017’s cases are holdovers from previous years, including dueling battles over how the Interior Department conducts leasing.

The industry is pushing the government to make sure it is conducting quarterly sales, as required by the Mineral Leasing Act. The case has been on hold this year while environmentalists jockeyed for a spot in the litigation. A judge granted their request this week, and now the case will continue in New Mexico.

On the other side, environmentalists are still pushing an ambitious case that challenges the agency to consider broad, cumulative climate impacts of leasing decisions.

Their cause may be helped by some big court decisions dealing with another fossil fuel this year. In August, a district court in Montana ruled that federal regulators needed to look at broad impacts from coal development plans. And in September, the 10th Circuit slammed BLM for its "irrational" National Environmental Policy Act consideration of climate impacts from coal.

"Stepping back a little bit, those cases are part of a real shift in the NEPA law to acknowledge that climate change is not the frontiers of science," Saul said. "It’s widely accepted science and reality."

Saul noted that some under-the-radar cases will put further pressure on the Trump administration in the coming year. In Nevada, for example, CBD and others are challenging BLM’s decisions to lease wide swaths of public lands without considering specific impacts of fracking on the state’s shallow aquifers and springs.

Another sleeper case for NEPA review of oil and gas development: litigation over offshore drilling in the Pacific Ocean. Environmental groups say Interior hasn’t closely considered fracking’s impacts on Pacific waters and species. The case has been moving slowly through preliminary stages this year and will likely heat up in 2018.

Freeman, the Earthjustice attorney, vowed that environmental action in the courtroom is not likely to slow down.

"The American public doesn’t want our natural heritage given over to the oil and gas industry," he said. "I think we expected these fights, and we anticipate these battles will continue next year."