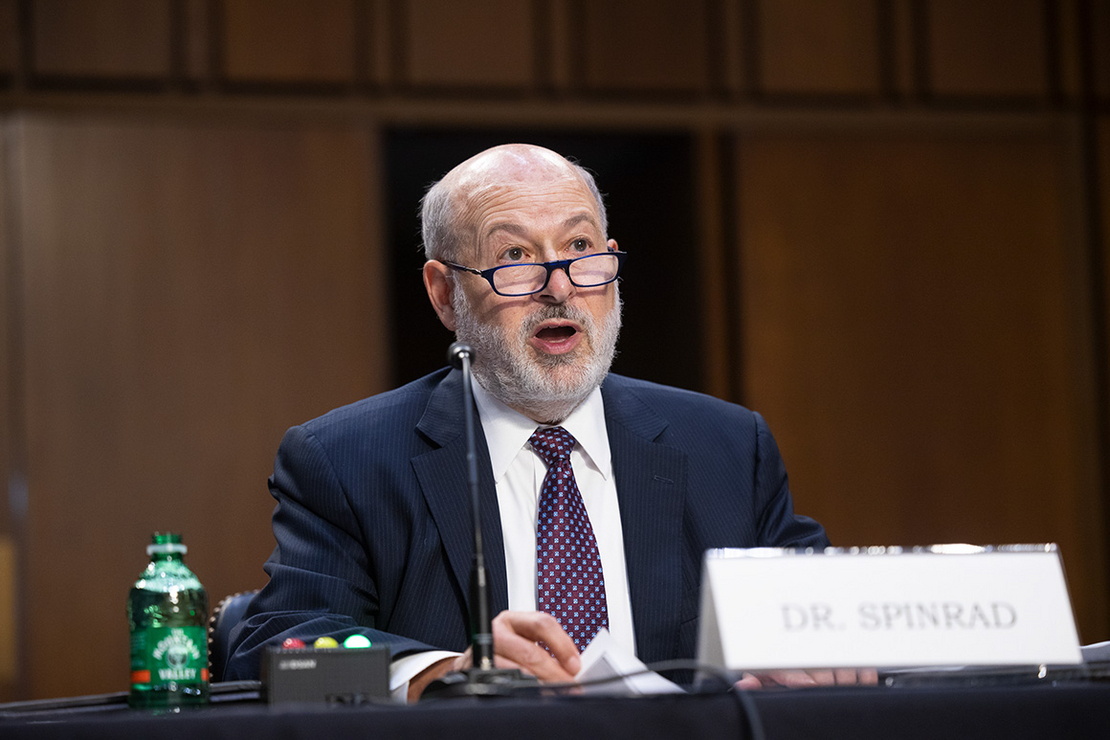 If you’re in the weather forecasting business, the headlines don’t get much better than the one that ran in The New York Times last month, describing the National Weather Service’s spot-on prediction of when a deadly tornado would strike Mayfield, Ky.

“They said the tornado would hit at 9:30. It hit at 9:30,” read the Dec. 14, 2021, headline, catching the eye of NOAA Administrator Rick Spinrad, whose job includes overseeing the weather service.

“I’m going to print that out,” said Spinrad, who’s now six months into his job leading NOAA and its 12,000 employees. He said he wanted to put the headline on display at NOAA headquarters because getting such high-profile attention “does extraordinary things for the morale of the agency.”

Keeping up the spirits of his workforce is just one part of the wide-ranging job facing Spinrad, who says his employees — like all federal workers — are “a bit beat up” by the ongoing coronavirus pandemic.

Spinrad has a full plate for 2022 that also includes putting the final touches on a new senior management team and making sure NOAA stays focused on his top three priorities: fighting climate change, creating more jobs and “building an equity lens into everything we do.”

Spinrad figures he has already made good progress on all fronts and expressed confidence that his years of experience will make it easier for him to deliver quicker results.

“I call myself a NOAA recidivist — this is my fourth job at NOAA,” Spinrad said in an interview. “You know, a lot of new political appointees come in and take six months to find the bathroom and try to figure out the culture of the agency. I really had a strong feeling for the kinds of things I needed to do.”

In June, Spinrad, a former professor of oceanography at Oregon State University who also served as a senior Navy executive, became only the 11th administrator for NOAA, which was created in 1970 during the Nixon administration. President Biden nominated him for the job in April (Greenwire, April 26).

Spinrad, 67, had been away from NOAA for only five years, after retiring in 2016 as the agency’s chief scientist, a job that President Obama had asked him to do in 2014. His resume also included earlier stints as the head of NOAA’s research office and the National Ocean Service, as well as co-leading a White House committee that developed the nation’s first set of priorities for ocean research.

Spinrad said NOAA is “trying to move out aggressively” to get people in key unfilled jobs, adding that “was not always the case in the previous administration.”

His own position was a prime example. When Spinrad took over, he filled a job that had been left without a permanent Senate-confirmed leader during the entire Trump administration, marking the longest vacancy in the agency’s history.

Spinrad’s post is one of three at NOAA that requires confirmation by the Senate, but he’s still waiting for final approval of his top two lieutenants.

The first, Jainey Bavishi, the director of the New York City Mayor’s Office of Climate Resiliency, would become NOAA’s assistant secretary of oceans and atmosphere. After President Biden tapped her for the job in July, Bavishi’s nomination cleared the Senate Commerce, Science and Transportation Committee early last month, but the full Senate did not vote on it before adjourning for the year. As a result, the Senate Monday returned the nomination to Biden and the president yesterday resubmitted it for consideration (E&E Daily, Nov. 18).

The second nominee, Michael Morgan, a professor in the Department of Atmospheric and Oceanic Sciences at the University of Wisconsin, Madison, would become the assistant secretary for environmental observation and prediction. Biden nominated him for the job on Dec. 15, but he has yet to receive a confirmation hearing.

Other top-level jobs that will need to be filled don’t require Senate approval, including a new chief scientist and a new director for the National Weather Service.

Craig McLean, the acting chief scientist and assistant administrator of NOAA Research plans to retire on April 1, while Louis Uccellini stepped down on Jan. 1 after serving nearly nine years as director of the weather service (Greenwire, Sept. 8).

McLean and Uccellini will both be remembered for defending NOAA’s scientific integrity when it came under attack in September 2019. They sided with forecasters after top leaders at NOAA issued a public statement criticizing the weather service for correcting President Trump when he falsely asserted that Hurricane Dorian could strike Alabama.

In harsh rebukes to the agency, both an outside panel and internal government review concluded that NOAA violated its own scientific integrity policy by questioning the work of forecasters, concluding they had made scientifically accurate statements in correcting Trump.

Comparing McLean to a ship captain, Spinrad said he had “steered NOAA through rough waters, always upholding scientific integrity." And he called Uccellini, who retired after a 43-year career in meteorology, “a legend whose legacy will have a lasting and positive influence for generations to come.”

Spinrad, who sat next to Obama during a panel discussion at the United Nations’ Climate Change Conference (COP 26) in Glasgow, Scotland, in November, said NOAA’s top job is to deliver “the world-class science, data, services and innovative solutions to help the world adapt to our changing planet.”

And he said demand for NOAA’s climate data, service and products is increasing “from virtually every sector of government," including the homeland security, transportation, health, agriculture and energy sectors.

“So it’s incumbent on us to be playing nicely in the sandbox in working closely through the whole portfolio and in interagency discussions associated with the Biden-Harris agenda for addressing the climate crisis," Spinrad said. "That’s job one.”

Like Biden, he argued that tackling the climate crisis can “create good-paying, union jobs and new industries," adding that it presents the nation with “the greatest economic opportunity of our time.”

Spinrad said that focusing on climate will also help the agency achieve its second task of “balancing our responsibilities in environmental stewardship with advancing economic development.”

“After all, we sit in the Department of Commerce,” he said.

For Spinrad, his other top goal of focusing on equity means making the issue part of all decisionmaking, including hiring more women and people of color and helping underserved communities with such things as getting more climate resiliency projects.

“Those are the three main things: the climate piece, the economic development piece and the equity piece,” he said.

Calling himself “a forever optimist," Spinrad said he thinks morale at the agency has remained high even under difficult conditions.

“Morale at NOAA is really good — I think people are energized,” he said. “But I think it’s pretty clear the pandemic has taken a toll on just how people feel. We’re spending a lot of time talking about burnout and how to address it and how to make sure people understand the value of their contributions.”

“I can tell you I think people are happy to have a new leadership team in place,” Spinrad added. “I certainly feel that as I go out in the field. We’re also seeing pretty visible signs of support.”

One of the biggest came in October, when former NOAA scientist Syukuro “Suki” Manabe, 90, shared the Nobel Prize in physics for his climate science achievements in the 1960s.

“Boy, was that a shot in the arm for the agency,” Spinrad said.

Then came the December headline in The New York Times saluting the precise work of weather forecasters in Kentucky.

Spinrad said that such public recognition lifts spirits for employees far beyond the weather service and affects all NOAA workers, "when they see that kind of performance” and it gains such high-profile attention.

“The weather forecasts and the emergency warnings that came out were some of the best we’ve ever had,” he said. “You compare that with what the workforce went through with Hurricane Dorian, where the forecasters were just doing their job, and you know how all that played out. In this case, you’re seeing The New York Times compliment the quality of their work.”

But despite the warnings, at least 77 people died in the multiple tornadoes that hit Kentucky that night, including nine in Mayfield, where a candle factory collapsed on workers. Some researchers have suggested more needs to be done to help people and businesses understand the warnings.

Spinrad said forecasters focus on “providing accurate and dependable forecasts, supporting public safety officials for the decisions they need to make, and amplifying the importance of preparedness and action when extreme weather threatens."

"We’ve vastly improved weather forecasts and worked with social scientists to make sure our weather warnings are understandable and actionable,” he said. “But we know that great forecasts alone don’t save lives, as many factors play a role in the decisions people make and how prepared they are for extreme weather.”