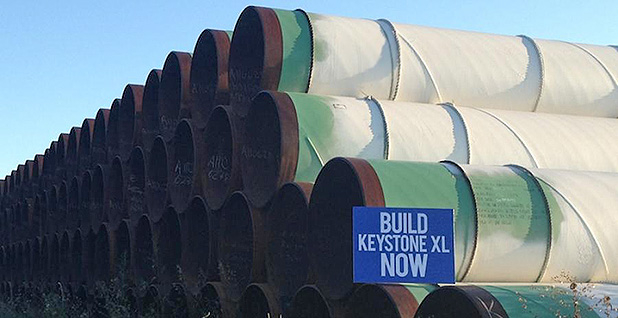 Republican attorneys general from 21 states are taking President Biden to federal court for axing the border-crossing permit for the Keystone XL pipeline at the start of his term.

Led by the attorneys general from Texas and Montana, Ken Paxton and Austin Knudsen, respectively, the challengers say in a lawsuit that the president bypassed Congress’ authority when he revoked the 2019 presidential permit for the 1,200-mile oil pipeline to cross the Canadian border.

They are asking the U.S. District Court for the Southern District of Texas to find that the Biden administration "had no lawful basis" to overturn the permit.

"The power to regulate foreign and interstate commerce belongs to Congress — not the President. This is another example of Joe Biden overstepping his constitutional role to the detriment of Montanans," Knudsen said in statement.

Biden revoked the cross-border permit for a 1.2-mile segment of the pipeline on his first day in office after deeming the project was no longer in the national interest, part of a sweeping executive order aimed at combating climate change (Climatewire, Jan. 21).

The decision reversed an approval granted by former President Trump, who had sought to sidestep a district court order requiring the State Department to conduct a more thorough environmental review of the project.

"This Administration has sought to leverage its power regarding U.S. foreign policy to unilaterally contradict Congress’s stated domestic policy regarding one of the most significant energy projects in a generation: the Keystone XL Pipeline. This it may not do," the attorneys general said in their complaint yesterday.

They also argued against Biden’s justification for revoking the permit as part of broader efforts to reduce the nation’s greenhouse gas emissions.

"Essentially, the President purports to unilaterally shutter Keystone XL to send a climate-friendly signal to the international community and secure a stronger negotiating position in his efforts to combat climate change," the attorneys general wrote.

"Congress has never allowed the President to encroach upon its powers over international and interstate commerce in order to facilitate the President’s pursuit of such vague objectives."

The challengers said the decision ignored the economic consequences of shuttering the pipeline and would not provide the environmental benefits touted by the Biden administration.

Legal experts have said Biden is on solid legal footing in revoking the permit, a move that prompted developer TC Energy Corp. to lay off hundreds of workers in January.

"This decision is political symbolism that will cause real-world damage, pure and simple," said one of the challengers, Georgia Attorney General Chris Carr, in a statement.

"President Biden does not have the power to overturn a permit granted by an Act of Congress, and what makes his actions even more disappointing is the complete disregard he is showing for American jobs and U.S. energy independence," Carr added.

Yesterday’s challenge drew praise from Sen. Steve Daines (R-Mont.), who had sought to reinstate the permit for the pipeline through legislation and through a failed amendment to Congress’ recent $1.9 trillion aid package.

"I’m glad to stand with Attorney General Knudsen in support of the Keystone XL pipeline and thankful for his leadership to protect Montana communities and jobs," Daines said yesterday in a statement.

Knudsen and other attorneys general had hinted at a coming lawsuit last month in a letter to Biden urging him to reinstate the pipeline’s permit (Energywire, Feb. 10).