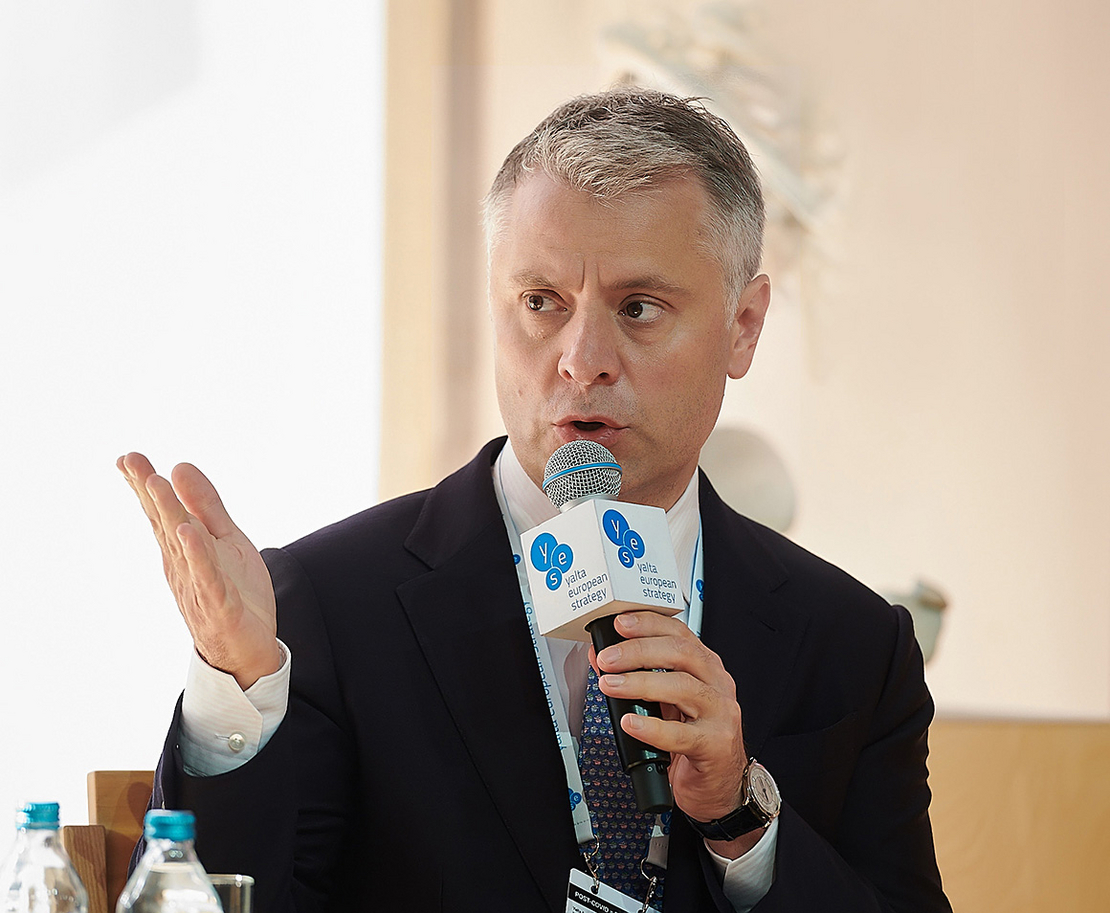 Yuriy Vitrenko, the head of Ukraine's state-controlled Naftogaz, talks during an interview with the Associated Press in Kyiv, Ukraine, on Aug. 27, 2021. Naftogaz

Ukraine’s top utility executive rushed into a bomb shelter as air defense sirens wailed recently in Kyiv to warn of a possible bombing by the Russian military.

Later that day, he did it again.

Between scrambles for cover, Yuriy Vitrenko, the CEO of Ukraine’s largest state-owned utility, Naftogaz, had received a phone call about an employee being killed by shelling. It was the 21st death of a Naftogaz worker in two months.

He also got news that attempts were unsuccessful to reconnect gas service in a small village that had been shelled, leaving survivors in the town of 11,000 people without heat, working cooktops and warm showers.

“It seems like we’re getting used to it,” Vitrenko said.

That’s one day in the life of Ukraine’s top power broker. Vitrenko is at the intersection of a ravaged country whose people are trying to survive, while they hope to find remnants of their once-modern world. A hot meal, a warm room, maybe a shower. Across Ukraine, more than 600,000 people have been cut off from Naftogaz’s services as a result of the war.

“It makes the lives of those who are cut off from gas supply not bearable, so I would say this is a humanitarian catastrophe in general,” Vitrenko told E&E News in a telephone interview. “Because of heavy bombing and shelling, there is no gas, no electricity, no water, sometimes even beyond the point of survival.”

In these times, even an energy executive can offer war strategy.

In his conversations with the White House, Vitrenko has offered his views about how to weaken Russia’s use of energy as a weapon of war.

As Vitrenko sees it, two of the most powerful tools are a major expansion of U.S. liquefied natural gas, and climate policies that reduce demand for oil and gas. Each could deliver a blow to the Russian economy, he said.

Ramping up U.S. oil and gas production and flooding the market with U.S. liquefied natural gas would temper Europe’s reliance on Russian gas, he said. So, too, would reducing oil and gas consumption in America.

Vitrenko, a former energy minister in Ukraine, said higher taxes on oil and gas as well as more energy efficiency could drive down global prices enough to hit the Russian economy. Still, he understands that it is “politically sensitive” for leaders to drive up natural gas prices in their own countries at a time when they are already rising. Another tool for Western leaders to consider is sanctions against countries that have ignored sanctions on Russia, he said.

Vitrenko said that if some of the world’s top energy consumers ramped up their use of clean energy, it could result in falling gas prices — and deprive Russian leader Vladimir Putin of war-making revenue.

“Increased energy generation from renewable resources would help globally, both in the U.S. and in Europe, because it means the U.S. is using less oil, less natural gas, more energy from wind and solar,” he said. “It means they can export more to the global market, it means prices in the global market are lower, and Putin gets less money. The same applies to the E.U.”

President Joe Biden proposed $33 billion in Ukrainian assistance on Thursday. It’s the largest aid package that he’s requested, and a significant amount will go toward arms and military equipment.

About $8.5 billion would go to support Ukraine’s economy and the democratic functioning of its government. It will also go toward energy security and to Naftogaz for natural gas purchases to meet humanitarian needs.

The request came a day after Russia cut off natural gas to Poland and Bulgaria.

Biden said his request is designed to weaken Russia’s ability to use its oil and gas to “blackmail” other countries.

“Energy is not just a commodity that Russia sells to help meet other countries’ needs, but a weapon used to deploy against those who stand against their aggression,” Biden said last week. “Let me be clear, we will not let Russia intimidate or blackmail their way out of these sanctions. We will not allow them to use their oil and gas to avoid consequences for their aggression.”

Last week, the Department of Energy authorized increased LNG exports from two planned terminals in Texas and Louisiana. After they are completed, the terminals could produce 3 billion cubic feet of gas per day.

Vitrenko said he is grateful the White House is listening to his concerns about protecting gas infrastructure, and eventually rebuilding what was destroyed.

Energy security will be a priority when rebuilding begins, said Sherri Goodman, a deputy undersecretary of Defense in the Clinton administration and a senior strategist at the Center for Climate and Security.

Russian attacks on the country’s energy infrastructure, the vulnerability of its grid to shelling and the disruption of gas service will require a new approach to how Ukraine is powered, she said. More clean energy would provide greater energy independence and a less vulnerable grid, including from cyberattacks, said Goodman, who is also a senior fellow at the Woodrow Wilson International Center for Scholars.

More production of local energy is needed — as are microgrids to tie that energy production together instead of being reliant on large national or subnational grids, she said.

“This is the key to our future to be more energy resilient,” she said. “If you have a microgrid that is integrated into your local sources, then you’re not reliant on an external grid, and that’s very likely the way parts of Ukraine should be rebuilt, even parts of the world that are still in energy poverty today.”

The White House has also provided other aid, Vitrenko said. Naftogaz workers try to reconnect gas lines and fix infrastructure as quickly as possible after it’s destroyed. And many are dying as they work.

To protect his employees, Vitrenko has asked the U.S. for bulletproof vests and helmets as well as other protective and military equipment that he didn’t want to describe for security reasons.

Even as it attacks Ukraine’s ability to keep the lights and heat on, Russia avoids damaging the pipeline that transports its own gas through Ukraine and into Europe, Vitrenko said.

Ukraine has little choice but to keep the pipeline flowing, he said. It delivers about a third of the natural gas consumed by Europe. In particular, Germany does not want the pipeline to be shuttered, and Ukraine is focused on preserving that relationship, he said.

Ukraine does receive gas transit fees from Russia, but that is nothing compared to the cost of rebuilding cities, he said.

“Revenue we get for transit cannot be compared to damages we see every day because of the bombing and the war,” Vitrenko said. “We would have stopped this transit long ago should we understand that it would stop the war, no doubt about it.”