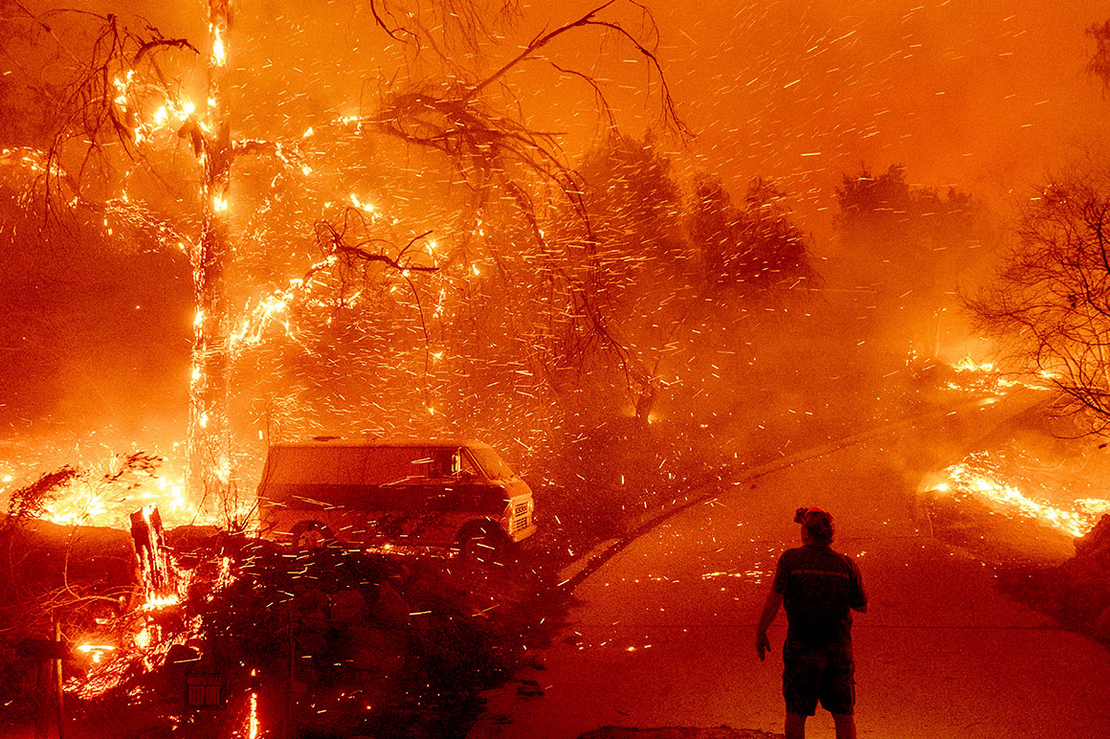 A man watches embers from the Bond Fire fly around his property in Silverado, Calif., last year. About a dozen states and municipalities are suing oil companies for contributing to climate change. Noah Berger/AP Photo

Environmental lawyers are scrutinizing a landmark settlement last month that forced four of the nation’s largest health companies to pay $26 billion for their role in creating the opioid crisis.

The settlement has important implications, legal experts say, for a slew of states and municipalities that are suing fossil fuel companies for the part they played in causing climate change.

“Both the opioid companies and the oil companies have allowed governments to pay for the harms that their products have caused,” said Korey Silverman-Roati, a fellow at the Sabin Center for Climate Change Law at Columbia Law School.

“And as a result,” Silverman-Roati continued, “the public has been on the hook for the harms, rather than the companies that misled the public.”

A bipartisan coalition of attorneys general reached the July 21 settlement in the opioids litigation with three of the country’s largest drug distributors — McKesson Corp., Cardinal Health Inc. and AmerisourceBergen Drug Corp. — as well as the drugmaker Johnson & Johnson.

Under the proposed agreement, the three opioid distributors would pay $21 billion over 18 years, while Johnson & Johnson would contribute $5 billion over nine years.

As opioid overdose deaths skyrocket, most of the funds would go toward prevention, treatment and recovery programs. States have 30 days to sign on to the deal, while local governments have up to 150 days to join.

In one opioid case that went to trial in 2019, an Oklahoma judge ordered Johnson & Johnson to pay $572 million to fund treatment programs in the Sooner State (Greenwire, Aug. 27, 2019).

Judge Thad Balkman, who later reduced the payment to $465 million, found that the drug company’s “misleading marketing and promotion of opioids” constituted a “public nuisance,” a legal term for an action that harms the public.

In climate lawsuits against oil and gas companies, Democratic leaders in five states and more than a dozen municipalities have argued that climate change is itself a public nuisance, and fossil fuel companies have contributed to it through their deceptive advertising to consumers.

The complaints ask the fossil fuel industry to help cover the costs of addressing floods, wildfires and other disasters fueled by rising global temperatures. So far, the climate liability cases have been tied up by procedural wrangling over whether they belong in state or federal court. It could be years before the suits culminate in potential trials or settlements.

“Our Exxon case is built on the same strong Connecticut Unfair Trade Practices Act that delivered $300 million in justice and accountability to Connecticut for the opioid epidemic,” Tong said in an emailed statement. “State consumer protection laws exist to protect consumers from unfair and deceptive acts, and the penalties for violating those laws — as seen in the opioid distributors settlement — cannot be ignored.”

Pat Parenteau, a professor at Vermont Law School, said he sees strong parallels between the conduct of the drug firms and the oil companies targeted in the climate litigation.

“You don’t have to be the one who administers the drug in order to be held responsible for the consequences that you clearly could have foreseen,” Parenteau said. “That’s very similar.”

Conservative scholars and lawyers for the fossil fuel industry argue that there are fundamental differences between the opioid litigation and legal battles over climate change.

Chief among those differences, according to Walter Olson, a senior fellow at the libertarian Cato Institute, is that oil and gas have provided far greater benefits to society than opioids.

Fossil fuels have allowed millions of Americans to heat their homes and drive their cars, which will make it harder to convince judges and juries that oil companies should have scaled back their sales, Olson said.

“Nearly everyone in court is going to accept the idea that it wasn’t improper to sell fossil fuels, and some of them we couldn’t do without,” he said.

Ted Boutrous, a partner at Gibson, Dunn & Crutcher LLP who represents Chevron Corp. in a number of the climate liability cases, made a similar point during oral arguments in Delaware Attorney General Kathy Jennings’ (D) lawsuit against 31 fossil fuel firms.

“This is not like an opioid case or an asbestos case. This is a claim challenging the production of a product that has been essential to our national security,” Boutrous told a federal judge in Delaware in May.

Boutrous didn’t respond to a request for comment for this story. But Richard Wiles, executive director of the Center for Climate Integrity, a group that supports the climate liability litigation, said it’s important to recognize that fossil fuels have had both advantages and drawbacks.

“No one’s disputing that oil and gas were the building blocks of the industrial age,” Wiles said. “But so what? [Oil companies] get to literally destroy the world because of that?”

He continued: “They provided extraordinary benefits. And opioids provided benefits in terms of pain relief. But now it’s time to deal with the costs.”

While the climate liability cases are still tied up in procedural wrangling, lawyers are already predicting what potential settlements with oil companies could look like.

For inspiration, they’re looking to past litigation against both opioid distributors and the tobacco industry.

In the 1990s, the attorneys general of all 50 states sued the largest U.S. tobacco companies over their alleged deception about the harmful health effects of smoking cigarettes and the addictive nature of nicotine. The suits culminated in a $206 billion master settlement agreement in 1998 (Climatewire, March 10).

The agreement prohibited tobacco companies from marketing to young people. It also resulted in the disclosure of millions of internal tobacco industry documents, which are now publicly available in an online archive maintained by the University of California, San Francisco.

Wiles said a settlement in the climate liability litigation could require fossil fuel companies to publish troves of internal documents or invest in massive emissions reduction efforts, among other things.

“You could imagine that a climate settlement could be far more creative than anything Congress could do,” he said.

Parenteau of Vermont Law School said it’s difficult to predict the dollar amount of a potential settlement with Big Oil. Even billions of dollars would represent a small fraction of the fossil fuel industry’s overall profits.

“There will be huge numbers put on the table, and they’ll be whittled down until they find a number that everybody agrees to,” Parenteau said.

The American Tort Reform Association, a nonprofit group, has decried both the opioid litigation and the climate liability litigation as a misuse of public nuisance law.

In a report last year, the group described Oklahoma, where a judge ordered Johnson & Johnson to pay millions to address the opioid crisis in 2019, as a “newly minted Judicial Hellhole,” while it criticized the challengers in the climate liability lawsuits for seeking “a political or regulatory shortcut.”

The association also blasted the challengers in public nuisance cases for hiring contingency-fee attorneys, who receive a percentage of the monetary damages in any settlement.

Plaintiffs’ lawyers stand to receive $2 billion in fees from the $26 billion opioid settlement. Many of the challengers in the climate liability cases have hired Sher Edling LLP, a California-based law firm that uses contingency-fee agreements.

A spokesperson for Sher Edling said partner Vic Sher was unavailable for an interview. But Parenteau defended the law firm and its financial arrangements with the state and local governments battling the oil and gas industry in court.

“They’re taking the risk that their theory of the case is going to win. And like any enterprise, the rewards have to be commensurate with the risk,” he said.

“From a public service point of view, the damages are going to enable communities to protect their residents from the effects of climate change,” he added. “So there’s benefits beyond enriching the lawyers.”