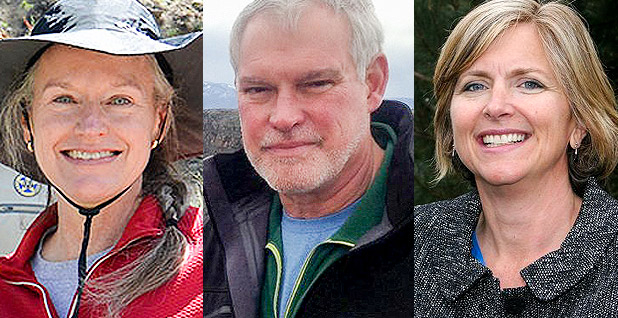 It’s not clear whether anyone has been named to replace the outgoing state directors.

Sources also confirmed that Lueders is being transferred to an unspecified position at the Fish and Wildlife Service in Albuquerque, N.M. The Washington Post first reported Lueders’ transfer.

It’s not clear whether the three state directors have agreed to the transfers. Only Cribley, who first joined BLM in 1975, has been with the agency long enough to retire with full benefits, sources said.

Interior Secretary Ryan Zinke has defended the transfers in general, telling reporters last week that he wasn’t firing anyone, but rather shifting people to jobs where their skills are better suited (E&E News PM, June 21).

BLM acting Director Mike Nedd held a June 16 teleconference with members of the agency’s Executive Leadership Team to discuss the latest SES transfers and to prepare senior leadership for "one or two more rounds" of similar moves in the coming weeks, sources said.

"Personnel moves are being conducted to better serve the taxpayer and the Department’s operations through matching Senior Executive skill sets with mission and operational requirements," Swift wrote.

The Trump administration’s proposed fiscal 2018 budget for BLM calls for a nearly 13 percent cut in funding from current operating levels.

Nedd’s email says the agency can probably handle most of the reduction through attrition and retirements but adds that BLM "may also seek authority from the Office of Personnel Management to offer early retirement and voluntary separation incentives later this year."

"All I have is anecdotal information, but it sounds like people are being transferred away from their expertise and away from their traditional area of responsibility, and I do worry that we’re going to lose some of the institutional memory, that kind of muscle memory that allows you to get good policy and not bad policy," Hickenlooper said.

Montana Gov. Steve Bullock (D), also attending the WGA meeting, echoed Hickenlooper. While Bullock said it’s "laudable" to reorganize the agency to make it more effective, "we need to make sure in doing so we’re not taking steps back."

Alaska, Colorado and New Mexico have all been involved in controversial energy development and natural resource issues in the past few years, and sources say Interior brass do not view the three state directors at issue as being compatible with the Trump administration’s stated push to promote more oil and gas development and mining activity on federal lands.

The transfer of Cribley, who has been BLM’s Alaska state director since November 2010, comes just weeks after Zinke toured the state and announced plans to open new sections of the National Petroleum Reserve-Alaska to oil and gas leasing (Energywire, June 1).

But Murkowski and other members of Alaska’s congressional delegation have long complained about federal land-use policies that they say have limited access to mineral resources and stifled economic development.

Prior to her appointment as New Mexico director, she served on detail in BLM’s Washington headquarters overseeing sage grouse conservation as acting assistant director for renewable resources and planning.

Among them is Salvatore Lauro, who directs the agency’s Office of Law Enforcement and Security.

Lauro is scheduled to be transferred to the Fish and Wildlife Service as chief of FWS’s Office of Law Enforcement.

In addition, Janine Velasco, BLM’s assistant director of business, fiscal and information resources management, is being transferred to an unspecified administrative position at FWS in Washington.