3 climate realists who could brief Trump 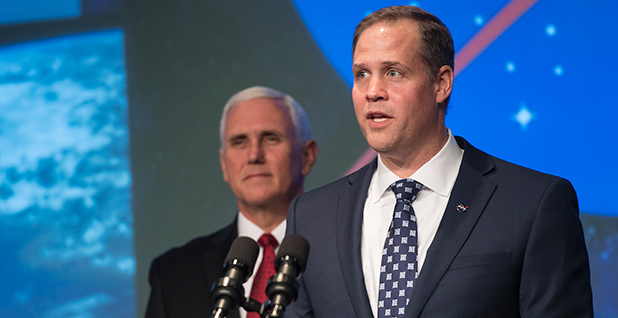 This handful of top advisers in the administration who accept climate science might have the rare ability to present the president with valid research that shows the threats facing Americans.

Three people in particular have the ability to reach the president’s ear. One is an extreme-weather expert who hails from the heart of oil and gas country, another is a former tea party congressman, and the last is an atmospheric scientist and weather observation expert.

Those who work in federal science agencies are compelled to brief the president on the evidence of climate change, said Andrew Rosenberg, director of the Center for Science and Democracy at the Union of Concerned Scientists. Letting the president convey false information is a disservice to the nation, he said.

"Everyone has an obligation to present the evidence to the president and to pretty much anyone who will listen," Rosenberg said. "The critical issue is that that evidence starts to come from a very broad range of scientists across the government, whether they be working at Department of Defense or NOAA or NASA, [the National Science Foundation] or EPA or Interior, all of those people need to continue to speak up."

There is no shortage of tough jobs in Washington, but an especially difficult one might be explaining the difference between climate and weather to Trump. For years, the president has conflated the two, tweeting that the world needs more global warming when it’s cold outside.

During the first two years of Trump’s presidency, his administration has proposed slashing research budgets and dismissed a series of alarming climate reports from the federal government. Trump didn’t have a science adviser for about two years, the longest of any president.

Now Trump is leaning into his dismissal of science. The White House is considering forming a group of researchers to challenge climate research, including whether it poses a threat to national security.

Yet Trump has some of the best researchers in the world at his fingertips. Here are three people who might talk to the president about climate change.

The most likely person to correct the president’s false claims on climate is Droegemeier, a former vice president for research at the University of Oklahoma. He was confirmed as Trump’s science adviser earlier this year.

Droegemeier is practiced in learning people’s interests in a nonconfrontational way and finding common ground to craft policy, said Renee McPherson, the university director of the South Central Climate Science Center at Oklahoma University. She worked with Droegemeier for years, going back to when she was one of his graduate students. She said Droegemeier doesn’t see himself as someone who should convince anybody on climate change, whether it’s "a person on the street or the president of the United States."

"I do think what he does is he knows scientifically the direction that we’re headed in this nation and on this planet, and he knows that science and technology can provide answers to some of these huge challenges that we have," McPherson said. "And so through his power of listening to others, I think he can weave together policy that would have bipartisan support and would also provide solutions to the challenge of climate change."

As a congressman from Oklahoma, Bridenstine was once a critic of the federal government’s position on climate change. He even asked President Obama to apologize for spending so much money on climate research. Then Trump appointed him to lead NASA, which conducts the bulk of the nation’s climate research, and Bridenstine acknowledged to lawmakers that he has "evolved" on the issue.

Early on in his new role, Bridenstine held a town hall meeting with NASA employees, where he let them know that he accepted the scientific consensus on climate change.

"I don’t deny the consensus," Bridenstine said. "Carbon dioxide is a greenhouse gas. We’re putting it into the atmosphere in volumes that we haven’t seen, and that greenhouse gas is warming the planet. That is absolutely happening, and we are responsible for it."

In July, Bridenstine returned to the House Science, Space and Technology Committee, on which he once served. He said he was "open" to briefing his skeptical Republican colleagues on climate, now that he oversees some of the world’s most important climate data collection equipment. But he added that it wasn’t his job to do so.

"I don’t know that convincing anybody is what my objective would be, but certainly what we know is that the climate is changing, we know that humans are contributing to it through carbon emissions, which are at higher levels than they’ve ever been," he said to E&E News.

Jacobs was recently appointed as the acting head of NOAA and has been serving as the assistant secretary for environmental observation and prediction since February 2018. He is an atmospheric scientist and weather observation expert who was working for Panasonic Avionics Corp. prior to his appointment.

NOAA continues to produce and disseminate a wide volume of climate research that shows Americans face serious risks from sea-level rise, extreme weather and deadly heat waves. Along with NASA, NOAA researchers recently determined that 2018 was the fourth-warmest year on record, driven by human-caused global warming.

NOAA is still without a permanent leader because Barry Myers, the former AccuWeather CEO, has yet to be confirmed by the Senate more than a year after being nominated. Late last month, Jacobs replaced Timothy Gallaudet, a former oceanographer and retired Navy rear admiral, as the acting head. Gallaudet did not interfere with the agency’s climate science and traveled to science conferences to promote its work.

Jacobs has said his appointment will not change the agency’s direction.

"In no way will this impact our mission or shift our priorities," he wrote in a Feb. 25 memo to employees.