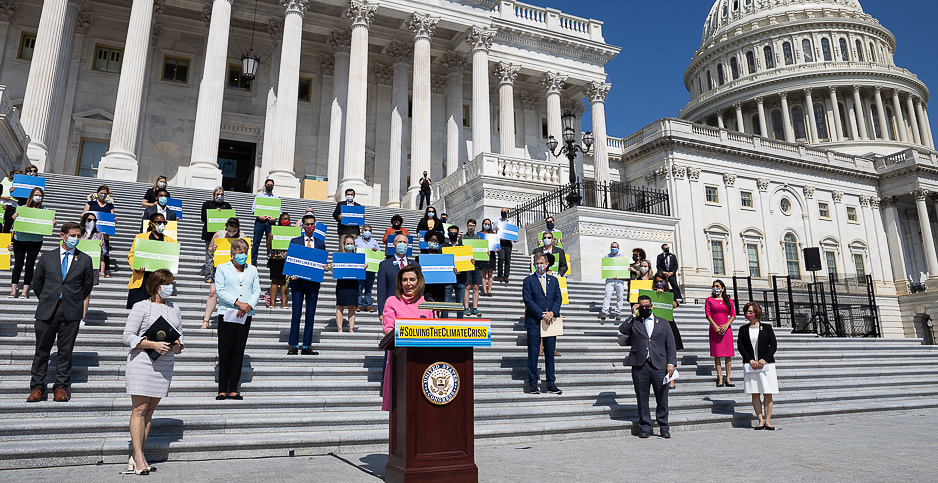 House Democrats’ blueprint for climate action would revive Obama-era rules that fell under the ax of President Trump and write new ones for key sectors, like oil and gas operations.

Hundreds of pages of recommendations released yesterday by Democrats on the Select Committee on the Climate Crisis envision a world in which Democrats control both chambers of Congress and the White House, and are able to move policies aimed at economywide carbon neutrality by 2050.

Some, like a carbon price and clean energy and efficiency standards for the power sector, have never before been implemented on a national level. But the road map also borrows from the Obama administration’s playbook by maximizing the use of existing regulatory authorities — particularly those provided by the Clean Air Act.

Rep. Kathy Castor (D-Fla.), who chairs the select committee, said the plan included ideas that could be "taken off the shelf and adopted into law" as soon as a new Congress begins.

Yesterday’s recommendations by the select committee call on Congress to pass new legislation requiring EPA to reconstruct many of those rules — with the proviso that they should be stronger than the Obama-era rules to reflect technological advances since 2017 and a growing sense of urgency to combat climate change.

EPA killed President Obama’s 2012 "grand bargain" with industry and the state of California in April, effectively replacing it with a laxer set of fuel economy standards set by the Department of Transportation. EPA also moved to deny California a waiver to promulgate its own tougher standards.

The House plan would reintroduce tougher federal rules while granting California its waiver. Other states would be allowed to opt for California’s standard instead.

The final rule is now under review at the White House, with stakeholder meetings scheduled through July 14, and will likely be released soon afterward. The Democrats’ recommendations would restore the Obama rule and an Interior Department leak prevention measure, which has also been jettisoned.

Congress’ involvement in reinstating these rules could fortify them and make them harder for future administrations to roll back.

But the select committee opted not to call for a new bill focused on EPA power plant regulations, even though the Trump administration killed Obama’s flagship Clean Power Plan last year, replacing it with a more modest place holder.

"A new president committed to climate action will be able to use existing authorities under the Clean Air Act and other statutes to clean up the grid," the road map states. Instead, it focuses on legislation to create new market-based standards for the power sector.

The road map also asks Congress to mandate that EPA build on Obama’s climate rules, including by regulating existing oil and gas sources of methane — something the last administration started but never finished.

The vast majority of the sector’s output of the powerful greenhouse gas comes from operations and infrastructure that existed before the 2016 rule. The Democratic road map proposes legislation setting a 90% methane reduction target for the petroleum sector for 2030 — a goal that could only be reached with strict monitoring, repair and methane capture for new and existing facilities. That compares with Obama’s oil and gas methane target in 2015 of 40% to 45% by 2025.

The blueprint demands that these rules cover all stages of the oil and gas supply chain, from the wellhead to transmission and storage to distribution.

The American Petroleum Institute, the trade group that has backed Trump’s rollback of new source methane rules despite support for them from some of its members, responded to the select committee’s efforts by touting its voluntary methane initiatives and Republican involvement in setting policy.

"Now more than ever, we need bipartisan policy solutions to reduce the risks of climate change that do not force a false choice between protecting the environment and growing the U.S. economy," said Frank Macchiarola, API’s senior vice president of regulatory affairs, in a statement.

Reinstate the social cost of carbon

Another target of the Democrats’ plan was the social cost of carbon — an estimate for the incremental harm of a ton of carbon dioxide released into the atmosphere.

The figure, which equaled $42 for 2020, was used in justifications for rulemakings at EPA and other agencies throughout the Obama administration.

It was compiled using established climate models by an interagency working group under Obama, and Republicans criticized it as lacking transparency.

The Trump White House disbanded the working group and has used a limited social cost of carbon figure that considers only climate risks to the continental United States and heavily discounts harm to future generations.